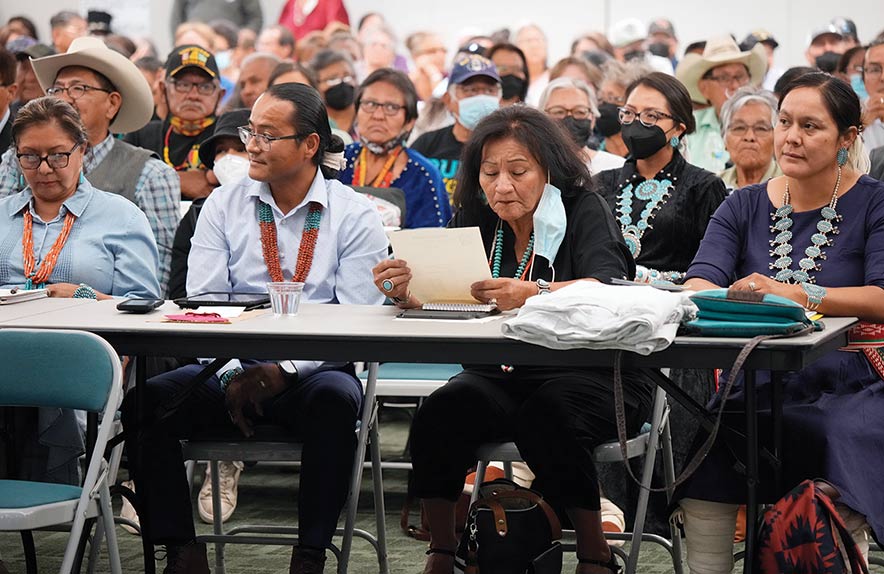 Navajo Times | Donovan Quintero
Navajo Presidential candidate Buu Nygren, second left, and other candidates prepare to respond to a question posed to them by the Northern Navajo Veterans Organization in Farmington on Friday.

The Army veteran from Shiprock, a member of the Northern Navajo Veterans Organization, said the 10 candidates for Navajo Nation president did nothing more than talk about themselves during their allotted 10 minutes.

After all, one of the crucial problems Navajo veterans face on the reservation is not having a home. Some have been waiting since the 1980s.

Todacheene said three of the candidates came close to what he wanted to hear, which he made clear did not mean they had his support and vote.

The Northern Navajo Veterans Organization hosted the forum – focused on veterans’ issues – on June 3 for the 15 presidential candidates at San Juan College in Farmington.

Those who showed up exchanged their views and agreed that services for Navajo veterans need improvement.

More than 200 veterans and their families, including Navajo Code Talker Samuel Sandoval, attended the three-hour discussion. 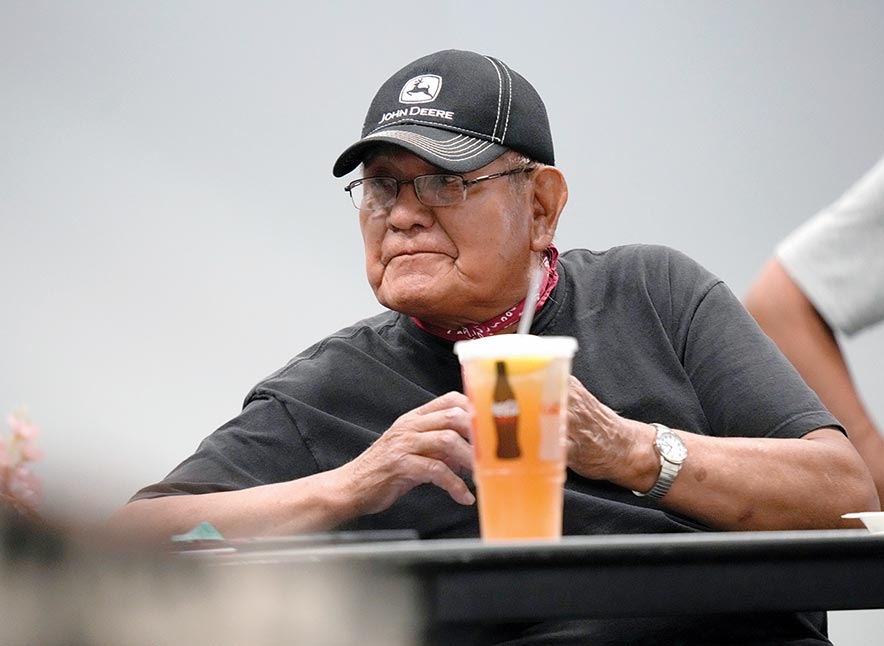 Navajo Times | Donovan Quintero
Jerry Todacheene, Vietnam veteran and president of the Northern Navajo Veterans Organization from Shiprock, listens to a Navajo Nation presidential candidate on how they would help Navajo veterans on Friday at the San Juan College in Farmington.

“I see that everybody only talked about themselves and their families – not about the real issue on the veteran,” said Todacheene, who served in Vietnam from 1967 to 1969.

Dayish asked the veterans in attendance to help him request the U.S. Department of Veterans Affairs’ recently formed 15-member Native American Advisory Council for the Navajo area representative to be Navajo.

Navajo Nation Veterans Administration Director James Zwierlein, who isn’t an enrolled member of the tribe, was appointed last October to the advisory council to represent the Navajo Nation. Nez had hired Zwierlein in November 2019.

Dayish said he spoke to VA Secretary Denis McDonough about requiring an advisory member to be Native American. He said they also talked to McDonough about an agreement that’s supposed to be in place between Indian Health Service and the VA.

“I told him that that’s a nice agreement, but nothing is in place out here. So, we need to address that,” Dayish said he told the VA secretary.

Dayish also said he ran into a roadblock while trying to find out why he was not eligible to get a COVID-19 vaccine when he went to the Albuquerque veterans’ clinic, the Raymond G. Murphy Department of Veterans Affairs Medical Center, about a year ago.

He said he was told his income was too high even though he was unemployed at the time.

His journey led to the Navajo Area IHS office, where he was ultimately told he was ineligible.

“I’m not the only one that’s experiencing trying to get health care,” Dayish said.

Todacheene said Dayish was the only one who seemed to express his concern about Navajo veterans represented at the federal level.

“The only person I see talk about the veteran is Frank Dayish Jr., and how he’s going to help the veterans at the federal level,” Todacheene said.

Todacheene added that he travels from Shiprock to Mercy Hospital in Durango, Colorado, to get medical service.

He didn’t mention the VA clinic in Farmington, the Community Based Outpatient Clinic, or CBOC. Durango also has a CBOC. 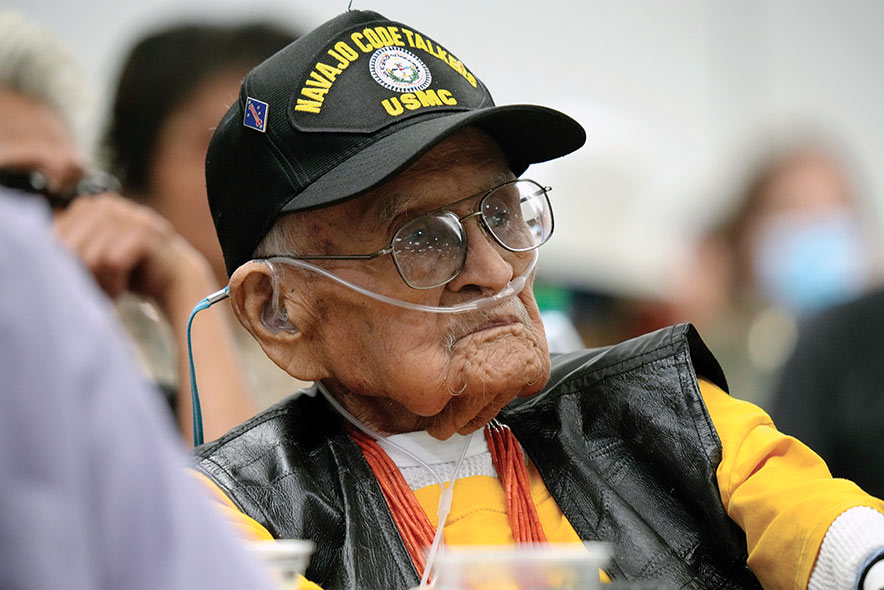 Navajo Times | Donovan Quintero
Navajo Code Talker Samuel Sandoval listens to a Navajo presidential candidate on how they would help him and the thousands of Navajo veterans during a forum at San Juan College in Farmington.

Jones, a Marine Corps veteran, said he was always the loudest critic of politicians who asked for veterans’ votes.

“I didn’t believe them,” Jones said.

Now that he is the one asking for the veterans’ vote, he said he would be his own “worst critic.”

“It’s about time we have a Marine in the presidential office today,” Jones told the veterans at the forum, adding that this is the reason he should be the next Navajo Nation president.

“It’s about time we have a vet that’s in office today because only us know what it means to be a veteran,” he said.

“I need to save some of you out on the battlefield immediately,” he said. “You need housing, you need immediate medical care.”

On his first day in office, Jones said he’d fire Zwierlein, which received the loudest applause from the crowd.

Jones said the Navajo Nation Veterans Act was a “good beginning,” but it still needs a lot of work. The act is intended to provide funding for programs, projects and services or activities for Navajo veterans.

“So, we’re going to remove layers and layers of bureaucracy from the way that the order comes down from Window Rock,” he said. “It’s going to get to the chapter site in hours, not days, not years.”

One of the issues, according to legislation sponsored by Council delegates Kee Allen Begay, Amber Crotty and Carl Slater, is that the current allocation system confused the 110-chapter veterans’ organizations, or CVOs, because there was no way to determine the number of funds allocated for each.

“Where’s all the trust fund going? Who’s using all the trust? Why is it we don’t get enough trust funds to the veteran?” Todacheene asked. “That’s what I’ll be looking at if I was the president.”

Todacheene added that Jones needs to understand he will need to work with the Navajo Nation Council if he wants to make all the changes he was selling.

“Mr. (Justin) Jones, he’s really racing to do this and that, but the Council delegates, they’re in the way, so he’s not really going to help the veteran,” Todacheene said. “It’s the delegates – they’re ones that carry the ball, they really play ball. He needs to understand that.”

Currently, the policies work against the Navajo veteran, said Todacheene.

Greg Bigman said at the forum that the tribe is in disarray.

“We have declining revenue, we have people out there (who) lost faith in our leadership and ability to see progress because we haven’t had progress for the last 40 years,” he said. “We need help to awaken the sleeping giant of the Navajo Nation to help us restore trust.”

The Teec Nos Pos native said he was approached in 2016 to help analyze the Navajo Nation Veterans Administration contract, including making the director’s contract for six years.

As president, he said his first order of business would be to change the language in the agreement.

“Those contracts don’t belong in the law, it’s in the bylaws,” Bigman said. “So, contracts can be cut, and that needs to be fixed.”

Bigman said as president, he’d create five independent business consultants for all 110 CVOs, along with planners who can start putting together cost models that can be used to project potential goals for the future.

“I’m here as your leader to fight with you,” he said. “As a naat’áanii, I plan to sit with you and navigate through these hard issues.”

“And Mr. Bigman, he kind of talked about his family and somewhat about the veteran, not really addressing the veteran’s problem,” he said.

A forum for the candidates will be held at Navajo Technical University in Crownpoint on June 14, on the economy on June 21 at Twin Arrows Casino and at Diné College in Tsaile on June 28.