‘I need to get on that horse’: Last Naatsis’áán hataałii passes on

Buck Navajo Sr., a hataałii who knew the original 12 major Diné ceremonies, sacred prayers, and songs, died earlier this month. He was 103. 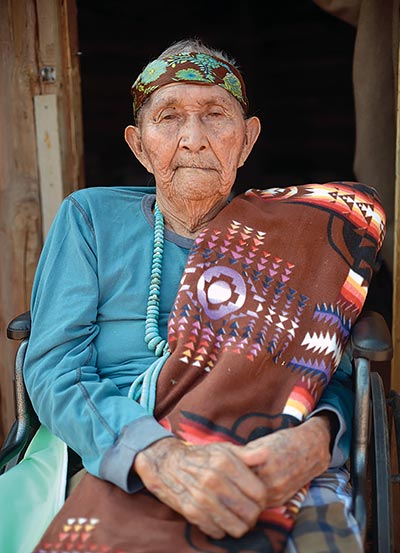 Navajo Times | Donovan Quintero
Buck Navajo from Navajo Mountain, Utah, poses for a picture in this August 2018 file photo. Navajo, considered one of the last medicine men in the Navajo Mountain area, has passed away.

Navajo passed on Nov. 7; his family announced. He was the only hataałii left in Naatsis’áán. He was ‘Áshįįhí and born for Tł’izíłání. His maternal grandfather is Tódích’íi’nii, and his paternal grandfather is Bitáá’chii’nii (Táchii’nii). He was the son of the late Dick Navajo, better known as T’iis Náát’i’, who died in April 1957 at the age of 107, according to vital records.

“He was one of the last medicine men in our community,” said Tiya Manheimer, Navajo’s granddaughter. “He offered a lot of teachings, ceremonies, prayers––anything he could help, with anyone, whether it was family or friends.

“Even people that came from other countries saw him and he was very, very helpful in many ways,” she said. “He never turned anyone down no matter how busy he was, no matter how much work had to be done. He always, always helped anybody. That’s how we remember him and we’re really going to miss him.”

Manheimer said her grandfather, who she called “Hubba Hubba” frequently giggled about something – either about himself or a small thing he forgot.

“Every time you saw him, the first thing he would do, when you walk into his hogan, he would start singing,” she remembered. “He would stand up and kind of dance. That was his way of welcoming you into his hogan.”

Manheimer said her grandfather was gentle and had positive things to say to people.

“We’re going to miss that,” she said, adding that her grandfather encouraged his family to think positive.

“Always say a prayer,” Navajo would tell his family, “and go outside in the morning and say your prayer and that will guide you. Your prayers can take you a long way.”

Manheimer says that’s what her grandfather did and practiced what he preached.

“He prayed every morning for his home, his livestock; for his family, for his kids,” she said. “That’s what carried him to be 103 years old.”

He spent countless hours with these men – and others like the late Ernest Nelson – to learn the ways of a hataałii in stages, advancing to full status of a healer. They knew how to bring/call for water and rain, and they were well-known for their abilities.

Navajo in 2018 told the Navajo Times that he learned all the Diné prayers and songs from them when he was young. He said they exhilarated and resonated within him so powerfully. He had their gift and carried their stories.

Navajo taught that one of the reasons for having a boy and a girl meant male rain and female rain, respectively, and that both are desired in an equal amount. He taught that offerings regularly needed to be given to the Holy People, the Diyin Dine’é, and the rainbow, the water, the earth, and the sky.

Navajo has said even though he’s old, he remembered them.

“And patients still visit me to this day,” Navajo said in two interviews with the Times Aug. 4, 2018.

Navajo had deep ties to the head of the earth, Naatsis’áán, where his umbilical cord is buried near Idaíílíní.

Navajo married Ada Navajo and together they had four sons and eight daughters. The couple had 40 grandchildren and many great grandchildren. Ada died at 96 years old.

“After my grandma Ada passed away, he really stopped doing the prayers because he said his prayers and songs weren’t as powerful as they used to be when she was around,” Manheimer said. “So, he got very lonely. We tried our best to keep him surrounded with families. He said he was really missing her.”

Manheimer said a week before he passed away, Navajo told her that Ada stood by him and was waiting for him.

“It was interesting because he told us that she was wearing an orange velveteen top with an orange scarf,” she said. “He was saying, ‘She’s here, she’s waiting for me.’ What was interesting too was he said there was a horse waiting outside for him by the hogan. And he goes, ‘I’m going to go soon, I need to get on that horse because that horse is waiting for me.’ He was looking forward to seeing her again.”

Manheimer said all of her grandfather’s belongings, including his medicine bag, will stay in the family.

“We have a lot of people asking for certain things in his (medicine) bag,” Manheimer explained. “As of right now, we’ve locked them up and we don’t want anyone to touch it.

“We have to sit down as a family and talk about what’s going to happen with his (medicine bag) because they are precious items and we can’t give them to whoever,” she said. “Most likely we’re going to keep them in the family. We have to protect them.”