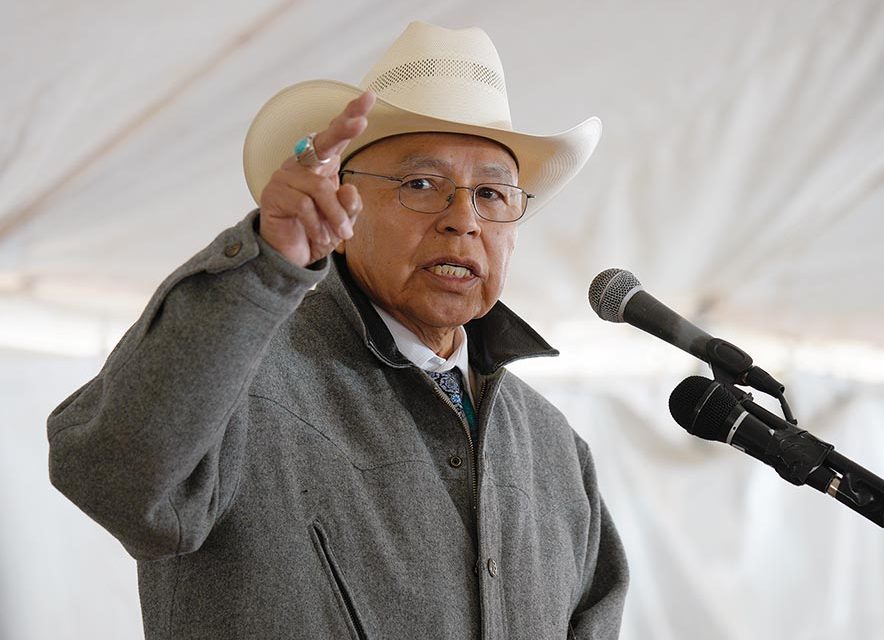 Former Vice President Frank Dayish has thrown his hat in the ring and announced his candidacy for Navajo Nation president.

The two-time vice president, who served under the Joe Shirley Jr. administration from 2003 to 2007, spoke only in Navajo and addressed a crowd of about 200 at the Shiprock Chapter House on Sunday.

Dayish referenced Diné Fundamental Law, veterans’ issues, lack of homes, disputes between livestock owners and grazing officials as some of the reasons why he decided to run for president.

“Our children, our elders, our relatives, those if you who know how to work, let’s work together, let’s make our tribe better and stronger,” Dayish said. “Let’s work as a family.”

“It’s something that I think would be, there’s going to be across the platforms for all of them,” Stewart said of the people who made official announcements to run for the tribe’s highest seat.

“Especially now with the ARPA (American Rescue Plan Act) funding, the pandemic that we went through,” he said. “That’s going to be a major platform for all the candidates.”

Stewart said Dayish would be the first Navajo veteran if he’s elected.

Former Shiprock Delegate Tom Chee, who lost his bid for the presidency in 2018, also was in attendance and heard Dayish’s speech.

Chee said what the tribe and the Navajo people have been dealing with — the COVID-19 pandemic, CARES funding debacle, ARPA — the next president and the 25th Navajo Nation Council need to set aside their own self-agendas and ask, “What’s best for the nation?”

“It’s like two parents in a squabble, they run all over the house, run over the little kids, demanding their rights,” Chee said.

Asked if he might be considering run, Chee chuckled and said only time will tell.

“Well, when there’s no followers, and when people don’t ask you to run, you’re not a leader,” he said. “And so far, I’m in that bubble right now.

“But if these cowboys with all these hats here say, ‘Go for it, strap on your chaps and spurs, your bronc is snorting in the chute.’ So, we’ll wait and see how it goes one or two weeks,” he said.

Dayish rounded out his announcement with some food for everyone. He thanked the crowd and asked for their support.

His next rally will be held in Tsaile, Arizona, this Saturday, he said.