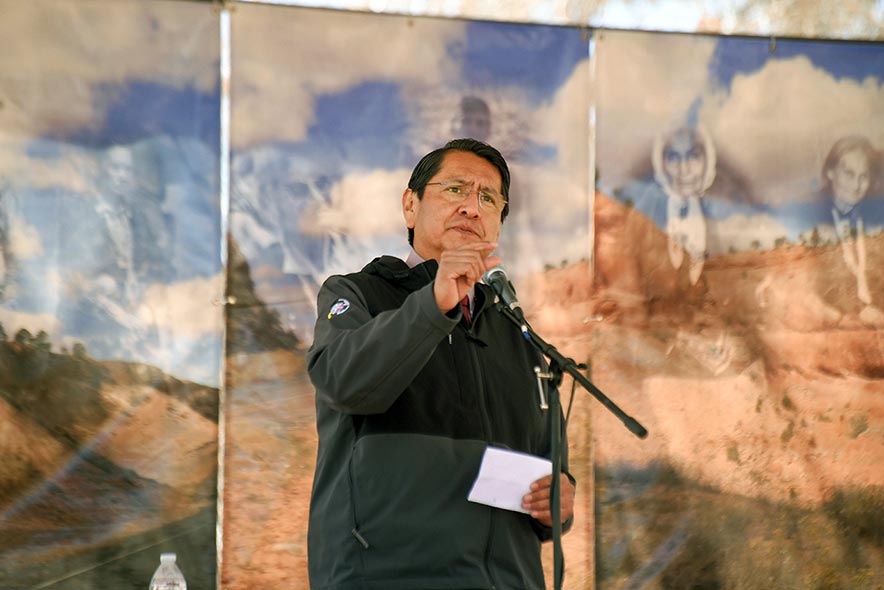 Navajo Times | Krista Allen
Standing in the forefront of the eight portraits of Shą́ą́’tóhí naat’áanii, the same ones at his inauguration in January 2019, President Jonathan Nez announces his re-election campaign Saturday in Shonto Canyon, Ariz.

“‘Ach’íí’,” Nez said as Tynisha Jesus took his portrait in front of a white background at the election office where he filed papers and paid fees.

He joked: “That’s what we say in Western.”

Standing on the Eddie “Cheii” Shootinglady Pavilion, he told his supporters, including his family, seated under cottonwood trees in Shonto Canyon, that he would be launching “Nez 4 Prez 2.0” because his work for the Navajo Nation isn’t complete.

“Shonto – this is where it all began,” Nez said of his political career.

He told his supporters Saturday he stood on the pavilion because of his grandfather, the late Henry T. Donald, who served as Council delegate for Shą́ą́ʼtóhí Chapter from 1959 to 1963. Donald passed on when Nez was a year old.

“I never got a chance to meet him,” he said. “But learning from the community members and the folks in the region, I learned a lot about my grandfather and how he helped the people.

Dinék’ehjígo’, Nez said his grandfather is one of the reasons he went into public service.

In his speech, Nez presented himself as a steely leader who he believes Diné voters will embrace as a figure of stability and transparency.

Nez came into office on Jan. 15, 2019, not knowing he would lead the Navajo Nation through a global crisis.

“We went through some difficult times over the past two years,” Nez said. “Of course, some of our opponents will say, ‘Well, they (Nez team) didn’t do anything.’

“And to have someone say, ‘They didn’t do anything,’ that should be an insult to each of us because we came together as a Nation, as a people, as a community,” he said.

In doing that, Nez is restoring faith among the Diné that their government can work for them and not just for emergencies.

“We’ve gone through some more difficult times in our history as Navajo people,” he added. “We went to Hwéeldi, where we stayed for over two years. We endured the pain until we came home to our homeland. Perhaps that’s what hada’íínółní means, and that’s the teaching we’re missing today.”

“I learned some great things about strength and resilience from this community,” he said. “Never give up. And we got to magnify that to our younger generation.

“The folks of Shonto, the folks of Western Agency, they put a lot of teachings into us here,” he said of his family. “Tough skin – that type of teaching needs to come back into the forefront.”

Nez said he hopes that all the candidates running for office challenge the Diné to do the same.

“To bring some of our way-of-life teachings back to the forefront, that is who we are as a Navajo people,” Nez said.

“There’s a reason why you’re still here,” he said. “Embrace that. Let’s come together, unify, and change the Navajo Nation for the betterment of our young children and many generations to come.”

The next several months will signal an informal start to the Nez campaign’s effort to focus on Diné priorities and inherent sovereignty as he travels from chapter to chapter facing a tough re-election race.

“You delegate that through elections, then they speak on your behalf,” Nez explained. “For the past four years, I did my very best to keep you informed about the government’s going on. I don’t think it’s ever been like that before.”

Nez said his administration took steps toward fulfilling that transparency and truth pledge.

“Some people will say, ‘Oh, there goes his photo ops again,’” he said. “But you know? It’s called transparency.

“The Navajo people need to know what they’re doing with their government,” he said. “No other time in the history of this world, we have technology that can help you know what’s going on in Window Rock. No shady stuff, no backroom deals – transparency.

“That’s what we did for the past four years,” Nez said. “It wasn’t about photo ops. It wasn’t about me saying look at what I did, it was about all of us working together for the benefit of our younger generation.”

Nez added he hopes this challenges the candidates running for office to be transparent, even if it’s hard to hear.

“I want to talk from the heart because you’re my people,” he told his supporters. “You all saw the worse in me, but you never gave up. My mom never gave up.

“I was down and out, but I was given another chance by our Lord and savior, Jesus Christ, to give me an opportunity to serve,” he said.

“Just like last time, they’re (people) are going to bring out all the (backlash) again,” he added. “We’ve all done some bad things, but we’ve learned from those mistakes.”