What was supposed to be a forum to tell the Navajo people who were the best fit to lead the tribe for the next four years didn’t go as planned.

Only Buu Nygren, a candidate for Navajo Nation president, and his running mate Richelle Montoya attended the museum’s forum on Tuesday night.

The campaign representative for the Nez-Abeyta team, Carissa Kee, read a statement to the crowd that stated Nez was in Washington, D.C., attending the swearing-in ceremony for Roselyn Tso who took the oath of office to serve as the director of the Indian Health Service.

Nez apologized for not attending the forum, according to his prepared statement.

“I apologize to all of the attendees and organizers of the event,” Nez’s statement read. 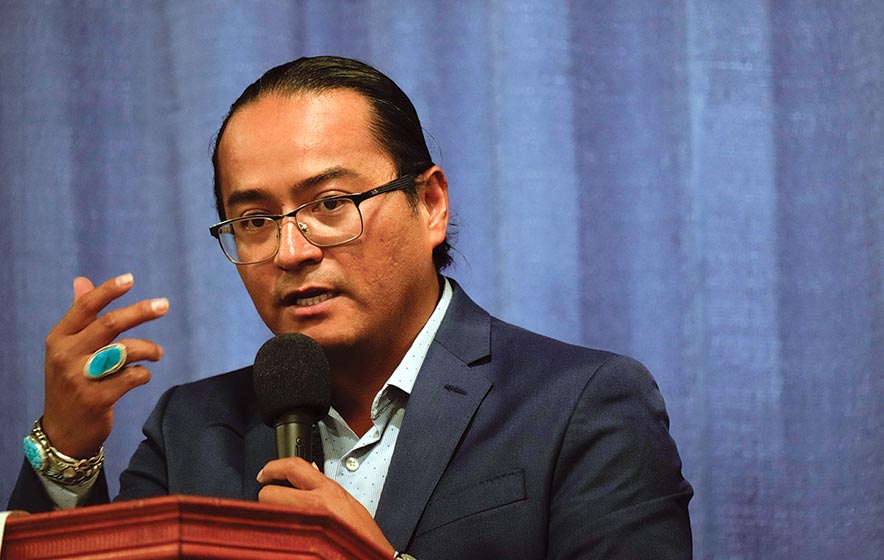 Nygren didn’t seem to appreciate the no-show as he was being introduced.

While responding to a question about the U.S. Capitol riot on Jan. 6, 2021, Nygren explained the importance of holding political leaders accountable using technology.

“We got to start using technology because right now you can be on a phone call from England, from Australia, from Sweden – wherever it may be,” Nygren said. “And you can be livestreaming to certain meetings or even a forum or a presidential debate because even (Navajo Technical University), during the presidential forum, I zoomed in because I wasn’t feeling so good. 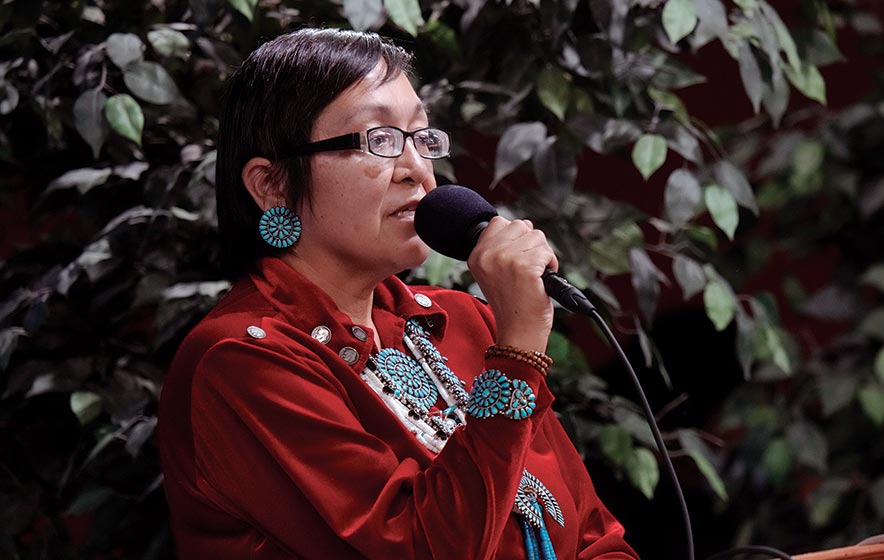 Delegate Nathaniel Brown believes Nez needed to participate in the forum even though “he’s on the job,” referring to the president’s travel.

“I know that Roselyn Tso’s confirmation is important, but I know she’s going to be there, and that can always be done after the elections,” he said, “and so I feel like our people deserve this respect for our presidential candidates to show up.”

After the Sept. 21, presidential debate at Diné College in Tsaile, Nez said he would be limiting the debates and forums he and his protégé-to-be Chad Abeyta would be attending.

“I have to run a Nation,” Nez said last Wednesday. “So, it’s kind of sometimes pretty difficult to do that, and … at the same time, campaign. For us, we have to still lead the Nation and govern at the same time, make time to come out to these debates.

“Based on that, I think we’re going to limit our participation in debates and forums,” he added.

Navajo Voters Coalition member Steven Begay said the coalition began preparing for Tuesday’s forum six months ago. It reached out to both presidential candidates and sent them invitations in August and September.

“We sent letters (at the) end of August to both camps,” Begay said. “And we got a response from Buu Nygren, but the Nez camp they didn’t respond. We sent another set of emails in the early part of September. We got a response from Buu Nygren and did not get a response from the Nez camp. “And then I went to Diné College,” he said. “I gave him letters again to let him know, but last night (Monday night), we got a letter from the president, (who) said he was on his way to Washington, (D.C.). We asked Abeyta, the vice-presidential candidate, if he could make it. They said he was traveling, so we weren’t able to get either one.” 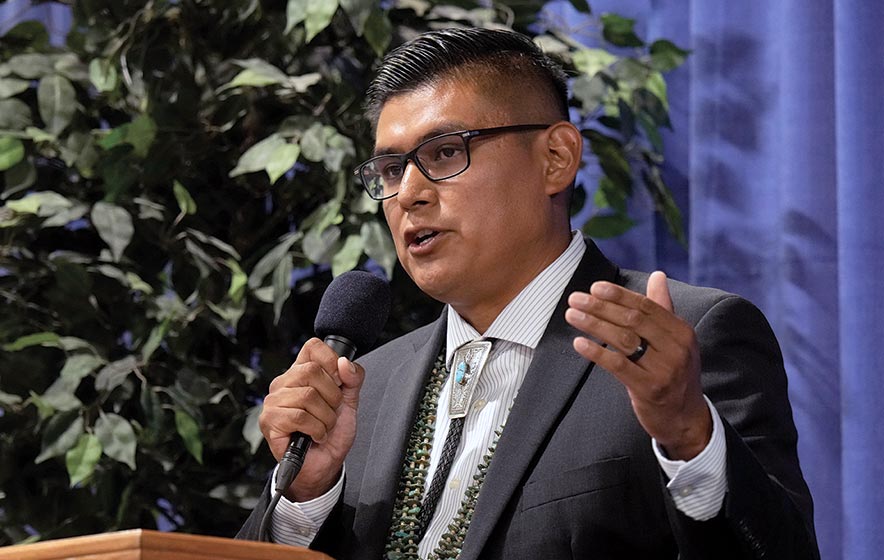 Begay said Tuesday’s event was supposed to be only a presidential forum, but they adjusted their schedule to include Montoya.

Begay said Tuesday’s forum would be the only one the coalition would do for this election.

Louva Dahozy, 95, who attended the forum, said she enjoyed it despite highlighting only one side of the presidential and vice-presidential race.

“I wish the other one was here,” Dahozy said, referring to Nez. “It was really nice; they really asked good questions.”

Dahozy jokingly said seeing two candidates debate made debates more exciting because each candidate would counter one another as they raised their hands.

“But this one, they made it really good,” she said, referring to Nygren and Montoya. “I just wish the other one was here.”

Dahozy said that Navajo belief isn’t about disrespecting one another but having good thoughts toward one another.

Despite the debate being one-sided, Nygren and Montoya were given four minutes to respond to various questions, including voting rights, reducing crime and poverty, and stimulating the economy.

“The Navajo Nation president needs to sit down with the profit-generating entities and dollar-collecting entities to say, in order for us to reduce crime, drug problems, alcoholism, domestic abuse, it takes money to do that,” Nygren said on reducing crime and poverty. “We’re going to have to sit down with them and say, ‘How are we going to generate more revenues from our enterprises and our tax collecting?’

“And at the same time, making sure that people feel some self-worth because the more entrepreneurs and small businesses we have across the Navajo Nation, the only means we have more self-sufficient people within our communities,” he said.

For Nygren, the issue of alcoholism was personal.

Since losing his mother, Charlotte Slim Toney, to alcohol last December, the loss of his mother, he said, has been a challenging situation.

Nygren, in April of this year, during his announcement, said he’d take on the issue of alcoholism if he were elected president.

“All those things need to be revamped so our entrepreneurs can be set up for success,” he said. “We will not hesitate because they’re the backbone of the Navajo Nation economy. We have to start investing in them.”

Abeyta said working with the Navajo Nation Council and the Resource and Development Committee, as well as working with the executive branch that has programs that support small businesses, would help provide infrastructure and help bring business projects into fruition.

On Tuesday night, Nygren said he’d met thousands of Navajo vendors selling their goods at flea markets, who’ve been managing to earn a living without getting help from the tribal government.

“Why can’t there be running water, electricity, nice trees, and a really good environment so people can go there and enjoy themselves?” Nygren asked regarding improving flea markets for Navajo vendors. “So, all the vendors, the small business, to entrepreneurs, to enterprises out there that are pro-self-sufficiency, I will be behind you because you’ve already taken the first step to try to be a good role model.

“But why not as the Navajo Nation government really expand on that and empower you?” he continued.

At the end of the forum, Nygren said it was disappointing that his opponent chose not to participate in the forum.