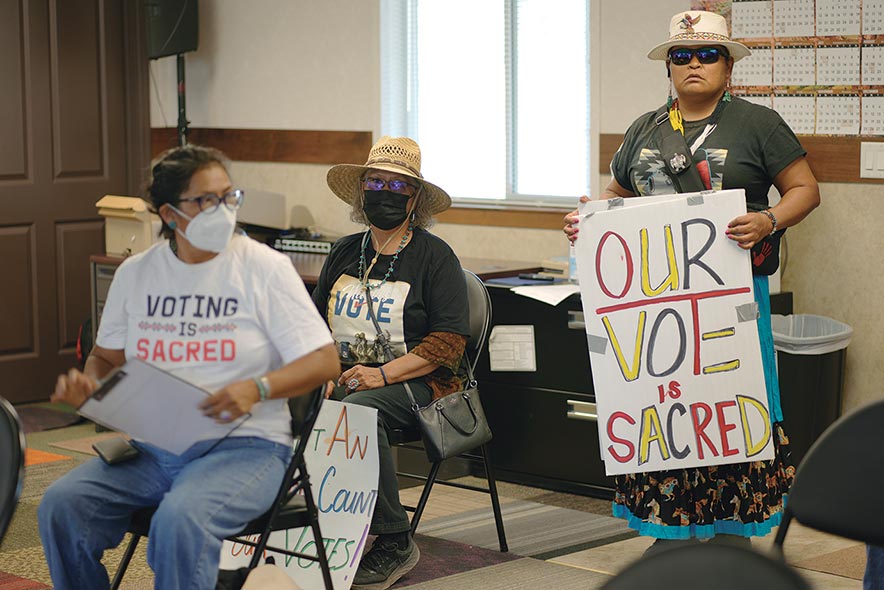 After being pummeled by a recount challenge by several former candidates for president, fumbling what should have been a slam-dunk certification of the votes on Sept. 8, Navajo Board of Election Supervisors Vice chair Raymond Maxx said he hopes they’ll have their act together.

On Tuesday, Maxx said the Navajo Election Administration’s staffing shortage and trying to certify the recount was helping Navajo voters register to vote for the Nov. 8 General Election, which is 47 days away.

“This time, we’re going to break out every elected position on a separate resolution instead of combining all of them at once,” Maxx said.

Since June, Dineh Benally, a former candidate, began emailing the election office and the supervisors requesting candidates be provided what type of voting machines and software would be used.

“We need to implement a technology that gives the voters confidence and security to vote, and it will be counted in a transparent manner,” Benally said in a June 6 email. “Integrity, transparency and confidence are key in fair and free elections,”

Eight days after the Aug. 2 Primary Election, during which board Chair Melvin Harrison said some voting machines had issues when they would not accept ballots, a letter signed by 10 former candidates was delivered to the election administration and the board stating they had concerns about the ballot count being “inaccurate and incorrect.”

Several grievances were also filed with the Office of Hearings and Appeals but were all dismissed.

Former candidate for president Frankie Davis on Sept. 8 said the injunction was filed. But according to her attorney, David Jordan, he filed an appeal with the Navajo Nation Supreme Court on Sept. 9.

In her appeal, Davis alleges 258 votes disappeared from 421 votes from “Fort Defiance alone,” ending with 163 unofficial votes across the reservation.

Davis also alleges disabled voters were not allowed to vote, that voting machines were outdated and defective, and the requirement to speak Navajo was violated.

OHA could also have ordered new voting machines to be acquired or called disabled voters who were not allowed to vote on Aug. 2 to submit their votes.

Jordan added he’d file an injunction if his client’s appeal was not resolved before Nov. 8.

“But I don’t think that’s going to happen. I think the Supreme Court is going to resolve this pretty quickly,” he said.

Maxx said he is aware of the appeal.

“We have DOJ, legislative counsel, ready to address those issues,” Maxx said. “And they will update us. So, yes, there is an appeal from the hearings and appeal office to the Supreme Court on one of the grievances.

“We’ll let it take its course,” he said, “we still keep moving forward with the election process.”

Because a request to recount all votes for Navajo president at all 110 chapters was granted, Maxx said it had impacted the two candidates – Buu Nygren and incumbent Jonathan Nez.

“A lot of people are waiting for our certification, and they’re kind of frustrated and upset that the process is not moving, and it’s not fair to the candidates that are moving on to general – they’re campaigning, paying for flyers,” Maxx said. 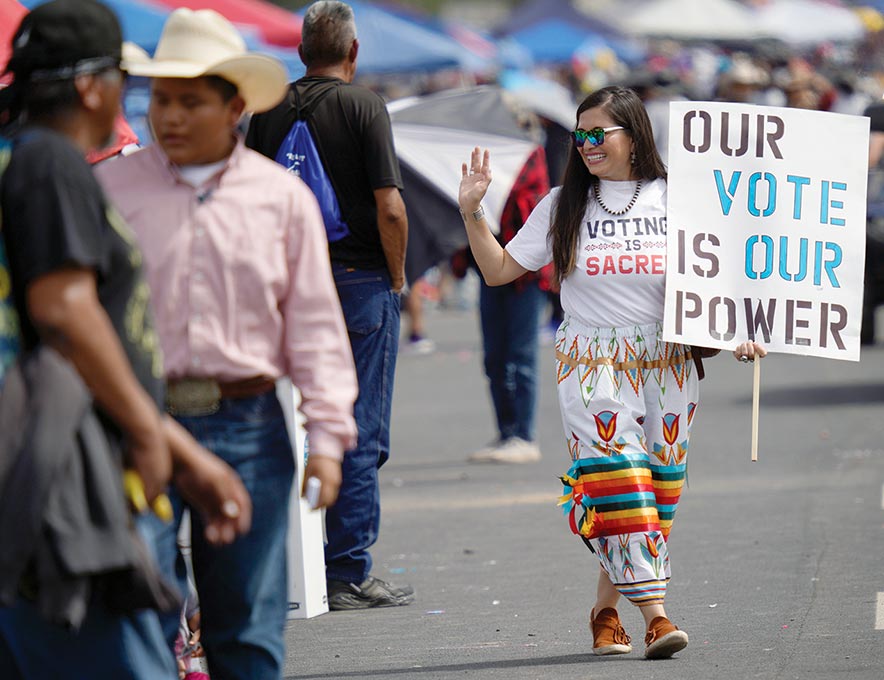 Former candidate Rosanna Jumbo-Fitch, who helped identify discrepancies during a five-day recount and voiced her concerns with Emily Ellison and Ethel Branch on why election board member Young Jeff Tom was on the board, said the election board was most likely going to certify the recount.

“I know they’re going to probably certify because everybody’s watching them,” she said. “The pressure’s on, and everybody’s talking, even the Council. They all wanted to certify this so they could continue with life.”

Jumbo-Fitch said even if the former candidates had the public sign a petition for a revote, she wasn’t sure if that’d be successful, saying the tribal government wanted the recount to be certified.

And despite 34 votes from Chilchinbeto Chapter and 44 votes from Becenti Chapter that were found during the recount between Aug. 29 and Sept. 2, even that would not stop today’s certification.

Not even an Aug. 19 letter sent to the board that stated Tom’s 2016 conviction for conspiracy to commit fraud resulted in spending 30 days in jail and paying $6,000 in restitution, which violates the Navajo Nation Election Code, would stop the certification.

“I was hoping they would be professional about it and answer a question or at least provide us an email with the response, but nothing to date,” Jumbo-Fitch said on Tuesday.

Overall, the recount revealed 89 discrepancies out of 104 chapters. Jumbo-Fitch said they could not recount six chapters, but she didn’t elaborate on which chapters.

“When they read it out loud, (we want) to ensure that they are catching all their numbers because those absentee ballots aren’t included in the tallies that we have,” Jumbo-Fitch said.

“That’s why I was wanting to get all 110 chapters because we’ll really show the discrepancies because the tape that they’re showing us from the machines that they’re so worried about through AES (Automated Election Services), they don’t even match the counts,” she said.

Rio Rancho, New Mexico-based AES was paid a total of $12,250 during the five-day recount, according to an Aug. 26 resolution signed by Harrison.

Maxx said he doesn’t blame Navajo voters who might be worried about their lost ballot or uncounted vote.

“We’re doing to do all we can to make sure that every vote is counted, all accounted for. That’d be our top priority,” he said. “And to also, hopefully, streamline the process where there are no restrictions and make sure that all the voters have a good experience.”

Maxx said for the General Election they plan to focus on the poll officials, the stipend they receive, and training.

“So, they’re very important,” he said. “We need to set a priority and focus on taking care of them and having them do a good job.”

Maxx surmised the votes that were found to still be in envelopes during the recount were most likely due to poorly trained poll officials.

“Or just human error,” he added.

Maxx also attributes that it was possibly human error that caused a Coalmine Chapter vote to get mixed in with Chilchinbeto Chapter votes.

“The way it’s supposed to work was the votes that show up go to the agency that they belong to,” Maxx explained. “And somehow, they got Coalmine at the central office and stayed there and ended up going to a different agency.

“So that’s probably a human error on that part,” he said.

According to the Navajo Election Administration, 47,495 Navajos went to the polls and cast their votes for the 15 Navajo candidates.

Of those unofficial total votes, 17,544 Navajo voters did not vote for Nygren or Nez.

A march will take place this morning at 8:30 a.m. It will start at the Bashas’ parking lot and end at the Law and Order Committee conference building, where the election supervisors will meet at 9 a.m., followed by a press conference at 10:30 a.m.