‘We can make change happen’: Utah’s Davina Smith on the campaign trail, heads for first debate

The first Native woman running for public office in Utah has out-fundraised Rep. Phil Lyman, her opponent, by more than $39,000. 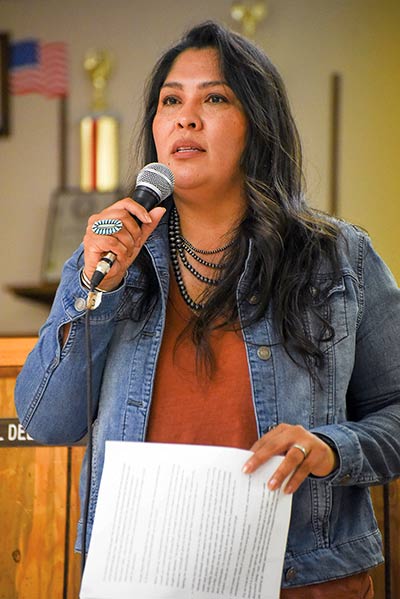 Navajo Times | Krista Allen
Davina Smith, from Tsébii’ndzisgaii, speaks to her constituents during a campaign rally at Aneth Chapter House in T’áá Bíích’į́į́dii. Smith, who resides in Blanding, is running for the Utah House’s 69th district seat. The district comprises 90% public lands, including Shash Jaa’ and Grand Staircase-Escalante in southeastern Utah.

“We (campaign) out-fundraised Phil Lyman 8-to-1,” Smith said. “And in terms of our door-to-door knocking, we have (team volunteers) canvassing in different parts of the (counties).”

“We still have our weekly get-togethers with all the volunteers,” she added. “I was up in Salt Lake City (three weeks ago) for a fundraising event, and we had a very good turnout.”

Smith said she and her team had sent hundreds of postcards to her constituents who attended the fundraising event.

“It’s so amazing – just the turnout and all the fundraising events and meet-and-greets, and to see people come together,” she added, “We just hired a Utah Navajo events and partnership coordinator, so (we) will be focusing along Utah Navajo side in organization.”

Smith’s originally from Tsébii’ndzisgaii, but she resides in Blanding. She is Bitáá’chii’nii (Táchii’nii) and born for Tábąąhá. She is the daughter of Roy and Darlene Smith.

All hands on deck

“It’s an all-hands-on-deck atmosphere because it’s important to get the word out,” said Smith, who will take part in a legislative candidate debate on Oct. 17 in Moab, Utah, where she will face off with Lyman, R-Blanding, each making the case that the future is now.

Smith said her team of canvassers have been knocking on doors and chatting briefly – often engaging in deep conversations – with voters.

She said the idea is to absorb voters in more meaningful conversations without talking points or pamphlets and get them to talk about their experience in the district.

“So, there are a lot that would be happening for Utah Navajo,” she said. “I know these are questions that would be brought up at the debate.”

Smith said she’s preparing for the debate with her team.

“I’m also thinking outside the box, and I want to learn more about other issues,” she said. “When elected, what are some other issues? We live in rural Utah, so our form of work environment is going to be completely different from the city.”

Smith said that rural Utahns are interested in vocational education, which can lead to good blue-collar jobs. And more trade schools are needed in her district.

“I’d love to see our own,” she said. “We do a lot of bids with other states; we can hire our own (Diné). That will be discussed in our debate.”

Two massive and controversial national monuments – Shash Jaa’ and Grand Staircase-Escalante – are in the 69th House district, and Lyman has been a local opponent of both.

“Those are areas I’d love to increase work volume there,” Smith said. “In Grand Staircase, we have only one ranger, and there is a lot of upkeep in terms of trails. In Bears Ears, the co-management plan works with tribes, and hunting is another issue.

“There are a lot of bids that come from out of state, and as long as we’ve known, in terms of our hunting, we’ve always been taught never to overindulge yourself,” she said. “That’s a practice we need to instill because a lot is happening around these (national parks and monuments) in terms of the public lands. So, there needs to be some type of hunting regulation and working with tribes.”

The district isn’t only home to Diné and other tribes such as the Hopi and the Pueblos, said Smith.

“That has to be supported respectfully,” she said, adding that water and the environment in Utah’s deserts are vital resources.

“I really hope that (young voters) know how important their vote matters,” she said. “Walking from door to door, the more issues (I’m) informed about. There’s so much we can do for our community, but it really takes everyone to come together.

“The point is we can make change happen,” she said. “For me, I’m going to be held accountable by my constituents. I don’t go in with my own agenda because we are all a part of this district just as I’m held accountable to Utah Navajo.”

Smith said she cannot make change unless people go out and vote.

“This is so important, and not to lose hope,” she added. “We have many more individuals coming out and stepping up to the plate. Making that step it’s an eye-opener for me. I still have much more to learn, but I know I’m coming in with a lot of conviction and passion. I do want to create change – a better place for all of us.”