Haaland holds her own in heated hearing

For four hours last week, U.S. Rep. Debra Haaland, D-N.M., answered questions from members of the U.S. Senate Committee on Energy and Natural Resources. The committee is charged with confirming President Joe Biden’s nomination of Haaland for cabinet secretary of the Department of Interior. 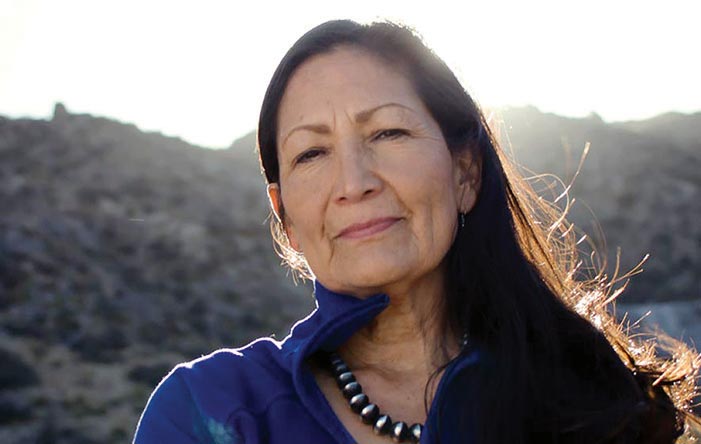 She remained calm, gracious and eager to serve throughout the grueling questioning that heated up around environmental issues and job losses due to President Joe Biden’s pause of new energy leases on federal lands.

At least two senators badgered her with repeated questions and one raised his voice to her.

The hearing was webcast Tuesday and Wednesday, Feb. 23 and 24, at energy.senate.gov

If confirmed, Haaland, Laguna/Jemez, will make history as the first Native American cabinet secretary, “something frankly that should have happened a long, long time ago,” said Sen. Martin Heinrich, D-N.M., when he introduced Haaland to the committee adding that her lineage traces back 35 generations in New Mexico.

The cabinet secretary nomination is not the first time Haaland’s made history.

In 2018, she along with Sharice Davids, Hochunk Nation, D-Kan., became the first Native American women to be elected to congressional seats.

Haaland’s nomination signifies Biden’s confidence that “She will be a true steward for our national parks, natural resources and all land,” remarked Manchin, who has publicly announced his support of her confirmation.

Fossil fuel and the future

“I am troubled by many of Representative Haaland’s views many in my home state of Wyoming would consider radical,” said Barrasso referring to previous statements Haaland made in opposition to fossil fuel energy as a New Mexico congressional delegate.

“Frankly your position on energy is alarming to Mississippians. What should I tell my constituents (who) are affected?” asked Hyde-Smith.

Relating that she understands her role as cabinet secretary, if confirmed, is vastly different from her role in Congress, she said, “I will work my heart out for everyone; the families of fossil fuel workers who help build our country; ranchers and farmers who care deeply for their lands; communities with legacies of toxic pollution; people of color whose stories deserve to be heard; and those who want jobs of the future.”

Attempting to quell fears that the pause on energy leases is permanent, she remarked several times that Biden’s executive order is on new leases, not existing ones, and it’s a temporary effort during an administrative permit review.

“Fossil energy does and will continue to play a major role in America for years to come,” she said, adding that the climate challenge must be addressed at the same time.

Responding to the need for jobs, Haaland said she energetically supports the Great American Outdoors Act, the Civilian Climate Corps and the Build Back Better Plan going forward under the Biden administration.

The GAOA aims to put people to work maintaining and repairing aging schools and outdated facilities.

The proposed Build Back Better plan projects to create millions of clean-energy jobs.

The concern over fossil fuel jobs was just one of many issues brought up during Haaland’s hearing.

Heinrich asked for her commitment to construct new schools on tribal lands noting that Laguna Elementary, where she went to school, is on the top of the list of 78 schools needing replacement due to poor conditions.

“Our children deserve to have opportunities to learn in the best way,” she agreed.

“There are thousands that need to be brought back home,” he said.

Haaland would “absolutely” make it a priority.

“It’s heartbreaking to know that folks who don’t know the power or meaning of those objects think of them as art. They are not art. (They are religious objects),” she stressed.

Sen. Mark Kelly, D-Ariz., bringing with him several letters of support from Arizona tribal governments, asked Haaland if she would prioritize the completion and full funding of Native American water settlements.

“That is extremely important. I look forward to working with you on these issues. There are several water settlements in New Mexico. It would be nice to get those done,” she responded.

Kelly said he was also counting on her support for a permanent ban of uranium mining on federal lands.

He expressed his concern about health impacts on Havasupai people living at the bottom of the Grand Canyon.

“Health and safety are top priorities and that of the sacredness of the Grand Canyon and other historical places,” she replied.

Reaching across the table

Haaland’s track record for collaboration stood out during the two-day hearing.

“As a committee leader, she demonstrated her commitment to work across party lines. Of all the members of Congress newly elected in 2018, she introduced the most bills with bipartisan cosponsors,” said Heinrich.

“I think she will do a good job and reach across the table,” said Rep. Don Young, R-Alaska, who as a committee guest joined Heinrich in introducing Haaland at the beginning of the hearing.

Working together over the years, Young said they secured bipartisan support on the Indian Buffalo Management Act, the Progress Act and legislation addressing Missing and Murdered Indigenous Women.

“It sounds like you are a leader in terms of pulling people together. You have done the hard work of putting together bipartisan coalitions. You are setting a very good tone. I look forward to supporting your confirmation and working with you,” said Sen. Ron Wyden, D-Ore.

“I will be a fierce advocate for our public lands. I believe we all have a stake in the future of our country, and I believe that every one of us – Republicans, Democrats, and Independents – shares a common bond: our love for the outdoors and a desire and obligation to keep our nation livable for future generations,” Haaland said.

As of press time, the senate had not voted on her confirmation.