For nearly a year the Jonathan Nez-Myron Lizer administration has been derailed from its planned course due to the global pandemic and in the state of the Navajo Nation address they gave a rundown of the efforts made to address the deadly virus.

“Throughout this pandemic, our health care workers, first responders, spiritual leaders, teachers, parents, Navajo Nation employees, and many others have demonstrated unwavering determination to help our people in many ways,” stated Nez. “They are the reason why we are filled with hope and optimism for the future of our Nation.” 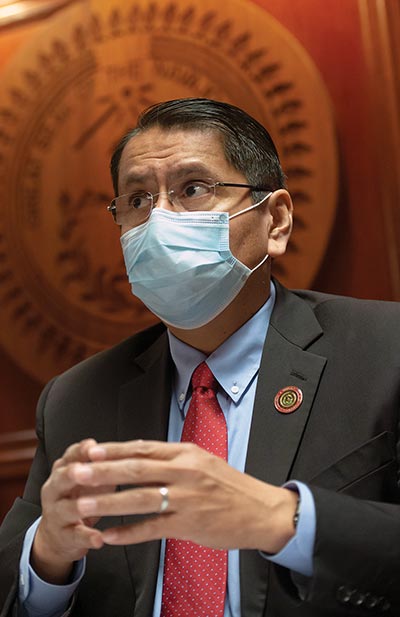 Nez gave his appreciation to the Navajo Nation Council for their support and guidance on how to spend the $714 million the tribe received under the Coronavirus Aid, Relief and Economic Security Act. What was more impressive was Navajo Tribal Utility Authority’s ability to supply 719 Navajo families with electricity.

NTUA also shared its CARES Act funding with neighboring utilities to extend electricity to 54 homes that were located close to the power lines of those utilities. All 300 of the purchased off-grid residential solar units were released to vendors for placement at homes.

With all of this, NTUA also reverted $34 million of their CARES funding into the Hardship Fund for payments to individual Navajos.

“They worked 10-hour days, including weekends and most holidays to expedite the completion of projects,” stated Nez.

JT Willie, director for economic development, and his staff were able to provide $29 million in CARES Act funds to 4,372 business owners and artisans to help replace revenue they lost due to pandemic closures.

Nez said his administration approved approximately $25 million to support the Navajo Gaming Enterprise’s laid off emplyoees, but the proposal did not move forward with Council. “With the closure of Navajo Generating Station, the ongoing pandemic, and other factors, our Nation is in a very touchy financial state,” said Nez, “which makes it very difficult to provide additional financial support.”

When it comes to the Sihasin Fund, the controller reported there is $426 million with $63 million requested for heavy equipment for chapters.

Nez stated in the report that they haven’t decided whether to support this legislation but they ask Council to consider long-term needs. “I know a lot of businesses are contacting us on how we can help them,” said Delegate Nathaniel Brown. “The Navajo businesses that make over $3 million, who weren’t eligible for CARES Act funding. (Also) we have some EMTs who did not qualify for special duty pay and to this day they have worked numerous hours.”

Some $18 million of the $21 million set aside for special duty pay has reverted back into the Hardship Fund because of difficulty in processing departments’ requests. Nez said in his address that they are developing a proposal for the Council to consider to provide hazard/special duty pay, using funds from the Personnel Lapse Fund that were line-item vetoed in the comprehensive budget. Delegate Jamie Henio asked Nez why he line-item vetoed more than $400,000 for chapter stipends.

“Why veto that?” asked Henio. “You can veto anything else but the chapter government funding, and here all along we say we support the chapters. But our actions prove otherwise. We’re just using them as pawns.” Delegate Rickie Nez said if the Navajo Nation is able to reduce Council then it is able to revitalize chapter governments and regionalize them. “We have 110 that are considered communities,” said Rickie Nez. “We have three states with a total of 77 counties … they operate different. Navajo Nation is going to be bankrupt … so we have to start thinking.”

But even with the concerns during this time, one accomplishment to note was the passage and signing of the Navajo-Utah Water Rights Settlement Act by Congress and then-President Donald Trump. The reauthorization of the Special Diabetes Program for Indians is good news, but a permanent extension with increased funding is the goal.