Lady Bengals one game away from state final 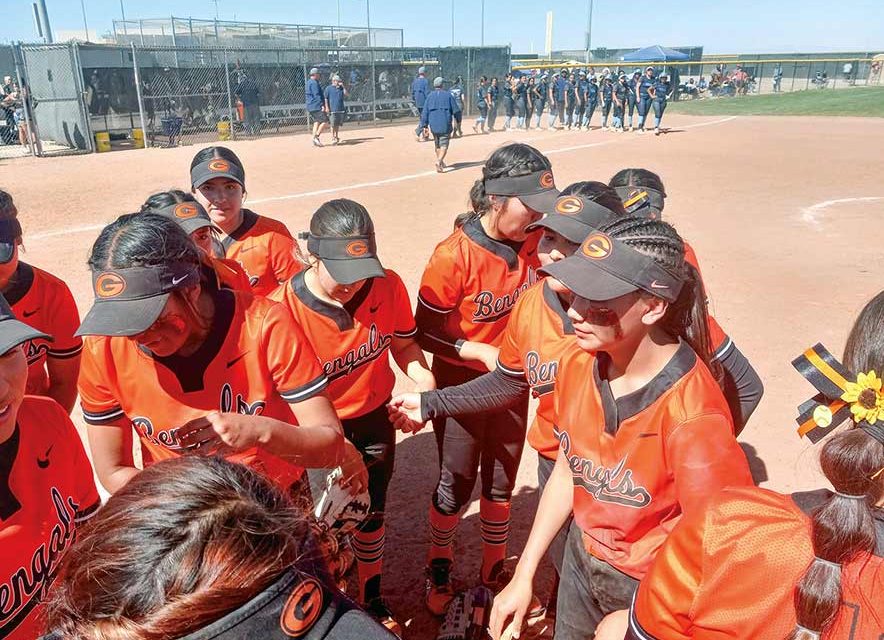 Navajo Times | Quentin Jodie
The Gallup softball team huddle together after defeating No. 3 Silver 10-2 on Thursday afternoon at Cleveland High School in Rio Rancho. Gallup is one game away from reaching the Class 4A title game.

The Gallup softball team is one game away of reaching the Class 4A state title game.

The second-seeded Lady Bengals went 2-0 on Thursday to reach the state semifinals and they’ll play No. 4 seed Lovington at 9 a.m. this morning at Cleveland High in Rio Rancho.

“These girls are working hard and they’re putting everything into it and, you know, it’s definitely showing,” Gallup coach Crystal Pablo said. “We’re taking it one game at a time and we’re here to win games. That’s our main priority. 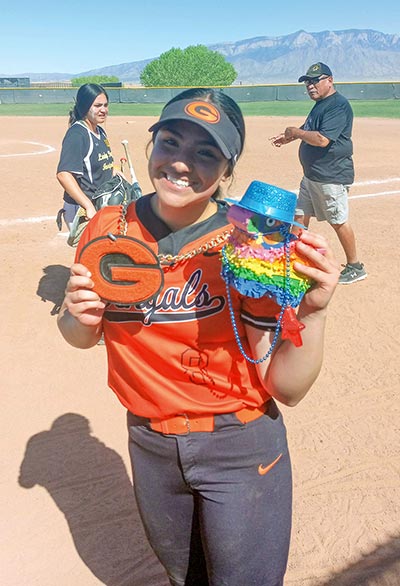 Navajo Times | Quentin Jodie
Gallup leftfielder Chaylee Becenti had a two-out solo homer against the Silver Lady Colts in a Class 4A state playoff game. Becenti was recognized at the end of the game with the “G Chain” necklace.

“We want to have fun off the field, and we just have to remember this is a business trip for us,” she added. “Our job is to win state.”

In other tournament action, the Piedra Vista Lady Panthers staved off elimination in the 5A softball bracket by outlasting No. 12 Roswell by a 2-0 count.

The Panthers went 1-1, losing its only game to top seed Carlsbad by a 2-1 count. PV will play No. 7 Hobbs at 11 a.m. in another elimination game.

In 2A baseball, No. 2 Rehoboth Christian held off No. 7 McCurdy by a 9-5 count in the quarterfinals.

“We were hitting the ball, but our hits weren’t dropping,” Rehoboth coach Anthony Sanchez said. “We came around and we got aggressive with our base running. It took us awhile and, you know our emotions were high and it goes for me too.

“We were amped up, pumped up and we came a little too high,” he added. “We weren’t hitting the ball like we’re accustomed to.”

Rehoboth plays No. 3 seed Capitan at 1 p.m. at Rio Rancho High in the state semis. The state championship game is scheduled for 1 p.m. on Saturday at the Santa Ana Star Field at UNM.

Gallup opened the double-elimination tournament with a 14-1 win over district rival Aztec that went five innings and in the next round they posted a 10-3 win over No. 3 Silver on Thursday.

The winner of today’s semifinals will advance into tomorrow’s championship game at 3 p.m. at the University of New Mexico softball field in Albuquerque.

The loser of this morning’s game will have to await the survivor of today’s elimination game to make the finals. That game is slated for 3 p.m. later this afternoon.

In the pitching circle, sophomore ace Seniah “SJ” Haines gave up one earned run on three hits while striking out six batters in four innings of work.

Lincoln pitched one inning and allowed one hit.

In the late game, Silver plated two runs in the third to take a 2-1 lead.

Gallup got that run back on a two-out solo home run from leftfielder Chaylee Becenti in the fourth that tied the contest.

“We made a few errors and that scored Silver and we just lost all of our momentum,” Becenti said. “We had two outs and I just told myself that I need to redeem myself. I needed to be there for my team, and I just put the bat on the ball, and it went over.”

Gallup went back to work in the next inning as they plated six runs for an 8-2 cushion.

“We just keep reminding the girls that it only takes one,” Pablo said. “It could take one base hit to get the girls going. We just got base hits through the infield in that inning, and with their outfielders playing deep we took advantage of that.”

The Panthers got a 16 strikeout effort from Emma Lovato to stay alive.

The junior righthander gave up three hits in seven innings of work to keep the Roswell team off balance.

“When you’re on the mound you just have to focus,” Lovato said. “You have to focus on one batter at a time and just get through it.”

A couple of times though, the Lady Coyotes had to make the PV pitcher work.

“For each pitch all I thought this is going to be my best pitch here,” the PV junior said. “After battling and battling I finally won. I had to keep my mentality strong.”

Werth said his pupil pitched a great game. He also praised the bottom half of his lineup as senior Akaysia Grogan and Reagan Werth came up with a pair of singles in the fourth for the game’s only scores.

“They hit up the middle and they scored those two runs,” he said. “That was huge for us because obviously that was all we got.

“I told the girls that at this point in time, it doesn’t matter how it looks or how we do it,” he said. “If you score one more run than the other team you’re moving on and that’s what we did.”

The Lynx put the game out of reach by plating five runs in the sixth for a 9-2 cushion before holding off McCurdy.

In that inning, Rehoboth capitalized on three errors by the Bobcats by scoring four unearned runs.

The Lynx came up with five hits with senior Mateo Chapman went 2-for-3 at the plate.

“Mateo played a great game,” Sanchez said. “He had a great game at centerfield, on the mound and at the plate. He did a great job, and he got the ball rolling with a double into the centerfield gap.

“In this tournament, you have to watch their pitch count, so that you can use them the next day and possibly for the state championship game,” Sanchez said of utilizing three pitchers.

As for Capitan, the Rehoboth coach said the Tigers are going to be a tough team to beat.

“Our pitching has to be on point,” he said. “It’s going to come down to who does the little thing and gets their team ahead and I think it’s going to be a good game.”