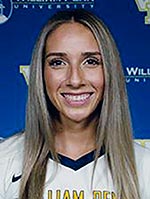 Previously at Piedra Vista High, the 5-foot-9 outside hitter was recognized in October as the Heart of America Athletic Conference attacker of the week, the first weekly honor of her career.

“That was pretty cool,” said the captain, chosen by the team. “Each year I progressed. This being my senior year gave me more of a boost to go out and play the game with confidence.”

As of Monday, she ranked 10th in the conference and third on the team with 131 kills.

With four regular-season matches remaining before the conference championship, she had a career high in service aces. Her kills per game and hitting percentage were career bests.

“She has really found her time on the outside and has been a consistent player for us this fall,” the coach said.

During an Oct. 27 win over Peru State, Jaquez led players from both squads with a career-high 19 kills, her third time this season reaching double figures, and added three digs.

“It was a matter of getting their defense out of line,” she said, noting that she was able to poke the ball over the net and drill winners down the line.

At the direction of the coaches, Jaquez gained 15 pounds since her freshman year.

The intent of the added muscle was so that “there will be more power behind my swings,” she said. “I’m already an undersized hitter. I’m not an overpowering hitter. It’s more smart ball placement.”

Since that first year, she said, her vertical has improved from 22 to 30 inches.

“Bebe has grown exponentially,” the coach said. “She has gotten stronger.”

In addition to the physical gains, she made other improvements to compete with the faster tempo of the college game.

“My court IQ has definitely gone up,” Jaquez said. “Executing more and being more disciplined.”