District rivals Gallup and Miyamura matched up for the third time this season and each time the Gallup team run-ruled its crosstown rivals.

This time the Lady Bengals knocked out Miyamura out of postseason play with an 11-1 victory on Thursday in a game that took five innings at Gallup High School.

The top-seeded Bengals will play No. 2 Artesia on Saturday afternoon for the 4A state crown at 12 p.m. at the University of New Mexico Softball Complex. 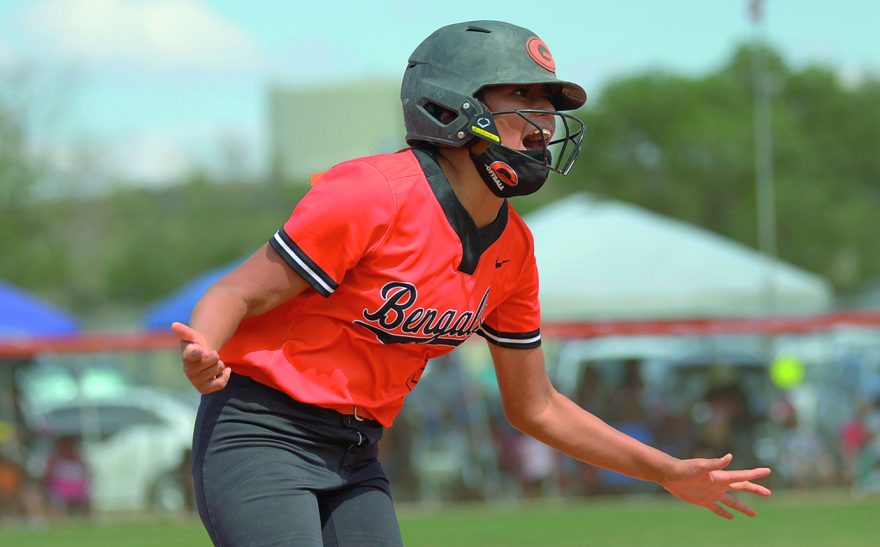 Navajo Times | Donovan Quintero
Gallup Lady Bengal Seniah Haines celebrates as she runs for home on Thursday during the Class 4A semifinal game against the Miyamura Lady Patriots in Gallup. Gallup run-ruled the Patriots with an 11-1 win and they will play Artesia on Saturday in the state title game.

In the other half of the bracket, Artesia shutout No. 3 seed Silver 4-0 to set up Saturday’s finals.

Gallup coach Rayfert Spencer said advancing to the 4A title game was one of the goals they set earlier this year.

“This feels awesome, this feels great,” he said. “I’m so happy for the girls. They deserve it, and they worked so hard. With me yelling at them and pushing them to their limits they deserved it.”

“This is exciting,” Gallup shortstop Savannah Watson said. “This a lot for us to take in right now because this is our first (state) championship game. We’ve all worked so hard for this and I’m just glad that I get to do this with my teammates.”

With their tickets punched, Spencer said they have one final goal in mind: a state championship.

“We’ve been taking it one step at a time, and we have one more step to accomplish that,” he said.

Spencer is anticipated a tough matchup with Artesia as the Bengals traded placing with the Lady Bulldogs all season long for the top spot in the 4A statewide rankings.

“They have a really tough pitcher,” Spencer said of junior ace RyLee Crandall. “She throws in the 60s and in the last 15 games we’ve seen pitchers around 50 so it’s going to be a big jump seeing a 60 miles an hour pitcher who has movement.”

Gallup wasted very little time in taking control in Thursday’s game as they put across eight runs in the opening frame, highlighted by a two-run homer from first baseman Katelyn Pablo and a three-run blast from ace pitcher Seniah Haines.

The Bengals tagged Miyamura starting pitcher Andrea Vinson with five runs on four hits before they made a pitching change after Pablo’s hit her fifth offering over the left field for a 5-0 cushion with no outs.

The Patriots then went to senior Lakisha Shorty and after giving up two walks, Haines homered to bring in those runners in for an 8-0 lead.

“We prepared for Lakisha to come in and throw and once we saw the other pitcher (Vinson) throw we had to readjust,” Spencer said, while noting that they cut short their fielding practices and went straight to the pitching machine.

“We adjusted to her speed, and it worked,” the Gallup coach said. “We scored eight runs. Lakisha came in and she did a good job of slowing us down. We had some key hits at the end to finish the game out.”

Those late hits came in the fourth as Gallup plated more three runs for an 11-1 advantage.

In the fifth, Haines retired the last three batters as she finished the game with one earned run on two hits. She struck out six batters and walked five.

“She’s just awesome,” Spencer said of his ace. “She did struggle in the second inning, but we had her back.”

The lone score Haines gave up was a solo homer from Jazmine Arreguin as the Miyamura third baseman cut Gallup’s lead down to 8-1.

“Gallup has a great team,” Miyamura coach Mattea Lovato said. “They just don’t play defense, they come out and hit the ball and that is what they did today.”

Despite Gallup’s early production, Lovato was hoping that they could rally and string some hits to get back into the contest. They did load the bases in the top of second, but they were denied when Haines got her fourth strike out to end that threat.

“I always tell my girls, ‘They hit, we hit,’” the Miyamura coach said. “Unfortunately, we did not hit. Everybody wanted to kill the ball, instead of small ball and put the ball in play. Sometimes the cards fall don’t fall where you want them to.” 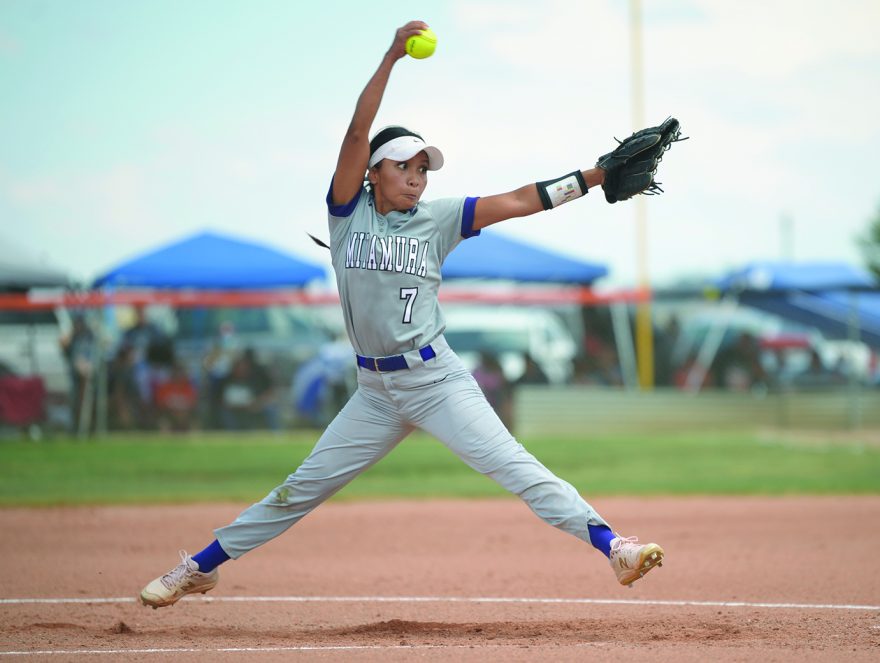 Navajo Times | Donovan Quintero
Miyamura Lady Patriot pitcher Lakisha Shorty (7) leaps off the mound as she pitches the ball to a Gallup batter on Thursday during the Class 4A semifinal game in Gallup. The Lady Bengals advanced to the 4A title game with a 11-1 win over its crosstown rivals.

Going into Thursday’s semis, Lovato said they had planned on throwing their eighth grader in hopes of throwing off Gallup with some off-speed pitches.

“Unfortunately, it didn’t work out the way we wanted it to,” she said. “I think the first couple of hits and the errors that we made set the tone for the game.”

Lovato said it was a tough loss but they’re going to root for their crosstown rivals in the championship game.

“We’re going to cheer for them because someone needs to show everybody in the state who Gallup is,” she said.