Local teams in the boy’s divisions of the 2020 Chandler Prep New Years Classic didn’t fare too well, but they walked away with experience as they head into important conference games. 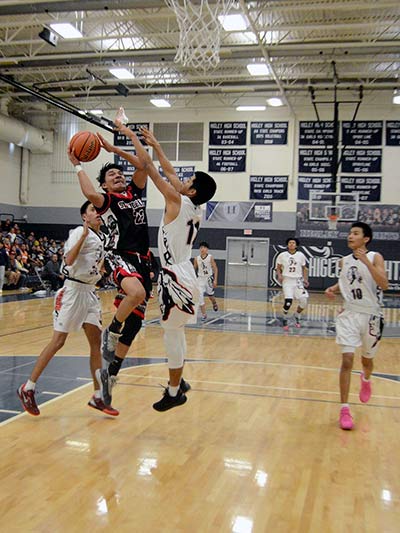 “The game and tournament showed our boys that they can play as a team,” said St. Michael head coach Joshua Thompson after a game with San Carlos. “Our focus has been to meet the energy of the game, come in with energy and try not to come in flat. My main thing is that we hustle and play defense – and they did that.”

St. Michael competed in the platinum division, which included teams like Greyhills, Red Mesa, and Valley Sanders. In the first round, St. Michael lost to Ben Franklin High, 48-37, but went on to beat both Valley Union, 61-36 and Red Mesa, 52-25. Despite tough efforts to overcome the San Carlos team, St. Michael walked away with a loss, 49-45.

“We are now heading into the conference games and those will count so we are getting ready for that,” Thompson added. “Even though we lost to San Carlos, the game gave them confidence.”

Thompson said in the game against San Carlos, the team lost two key players – one who got into foul trouble in the second quarter and then one to an injury.

“That showed them that they can play without some key players,” Thompson added. “They were able to come back, take the lead, we just didn’t finish our free throws. I am happy with how they finished this game.”

For Red Mesa, head coach Hank Charleston said his team still has a ways to go.

“These kids need to know where to pass the ball; we still had way too many turnovers,” Charleston said. “When we get their turnover, we don’t finish. Overall, it is a process and a hard one to finish the game. They get frustrated and it has been hard on them.”

“We have to run our plays, be patient, take care of the ball and execute on what we get,” Charleston added of the upcoming conference games.

The only local team in the diamond division was Window Rock. In the opening rounds, Window Rock lost to Paradise Honors, 73-43, then to Scottsdale Christian, 47-42. In the third round, Window Rock walked away with a win against North Canyon, 49-35, and Rio Rico, 46-42 for the consolation bracket championship.

Window Rock’s head coach Tom Bizardi said the tournament “gave us an opportunity to continue to build our program by providing us with competitive games during the winter break, so that we stay focused and prepare for conference play. We competed against different teams with different strengths like speed, strength, including offensive and defensive strategies.”

Bizardi is in his first year as head for the Scouts.

“This is the first year I am implementing my coaching philosophy with Window Rock High School basketball program,” he said. “I know it is difficult for them to be introduced to a new program and adjust their playing style. I continue to stress to the players that we are continuously a work in progress. We still have an abundance of skills and strategy to implement to be effective later on in the season. Therefore, we are taking one game at a time and making adjustments quarter by quarter in games.”