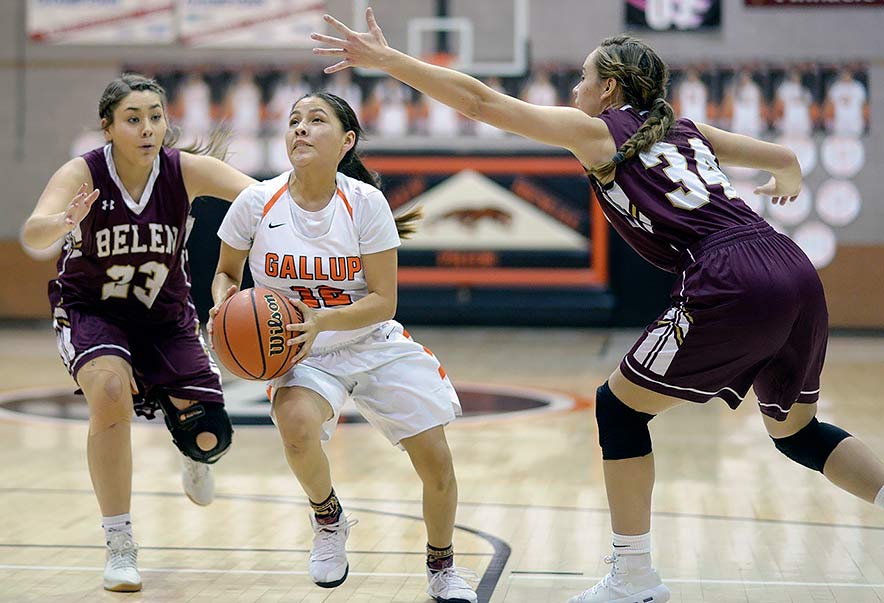 In terms of routine wins, the Gallup girls’ basketball team didn’t give the Belen Lady Eagles any room to breathe on Monday night.

The Lady Bengals (7-4) forced the issue with their ball pressure to score a 74-32 victory over the winless Eagles at Gallup High.

Gallup coach Todd McBroom said anytime they can get playing time they are going to use that time to build on things they need to work on.

In particular, the third-year coach alluded to a 21-second stretch when Gallup gave up four offensive boards in the middle of the second quarter.

McBroom also made reference to a 9-1 Belen run as the Eagles closed a 22-point deficit down to 35-19 at the break.

“There’s always things that we can work on, even if it’s small goals,” he said. “We worked on ball movement and sharing the ball and different things like that.”

As for Belen’s late run in the opening half, McBroom said they fine-tuned their defense that took away the middle pass.

“They started to break our press but the girls did a great job of adjusting,” he said. “They pressured the ball and they turned them over quite a bit.”

With all that ball pressure the Bengals collected 29 turnovers for the contest. Eleven of those extra possessions came in the third stanza as Gallup scored 21 unanswered points for a commanding 56-19 advantage after a two-point basket by shooting guard Michaela McCurtain with 3:26 left in the quarter.

“We came out on fire,” Gallup sophomore Jordan Joe said of their third quarter blitz. “Even though we were up by a lot coach motivated us and that gave us a push to play hard and keep the momentum going.”

Gallup post Hailey Long said their defense was as good as it can get during that five-minute stretch at the start of the second half.

“Our defense made it a lot harder for them to get the ball on their side of the court,” she said. “I feel like we accomplished what we wanted to do as a team in that second half – we played better defense and we rebounded the ball.”

McBroom concurred and he credited the “tip balls” for helping them score in transition.

“Any time you can get tip balls on the press it’s going to lead to good shots,” he said.

With two weeks remaining before the start of District 1-4A play, the Gallup team will enter a tough stretch of games against some state-bound teams starting with the Portales Shootout on Thursday.

The Bengals will play Portales, Carlsbad and Pojoaque Valley at the three-day round robin tournament this week. The following week they will play at Rio Rancho on Tuesday and then at Espanola Valley next Saturday.

“It’s not going to be easy playing on the road but it helps build for March,” McBroom said. “We’re going to be on the road in March and it’s going to help build character and endurance.”

Joe said the entire squad is looking forward to these games.

“It’s going to test us but if we can play together like we did tonight we should win those games,” Joe said. “I definitely believe we can win because I believe in my team and the coaches believe in our team.”

Long chimed in and said the caliber of the teams they’ll face will help in their strength of schedule, a determining factor in the state seeding process.

“If we can win most of these games we can get a better seed for state,” she said.