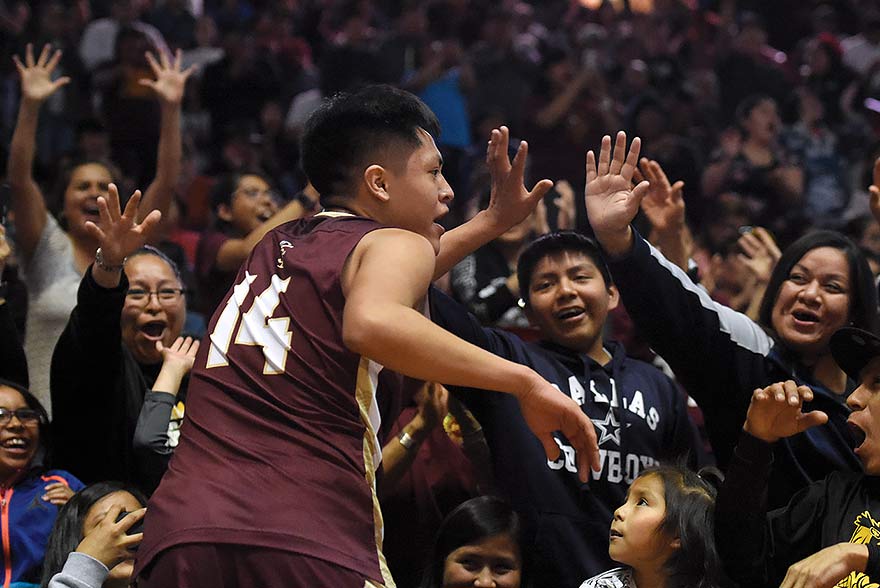 Navajo Times | Ravonelle Yazzie
Santa Fe Indian’s Virgil Valenica gives high-fives to the crowd after the Braves won the New Mexico Class 3A semifinal against the St. Michael Horsemen at the Dreamstyle Arena in Albuquerque on Friday.

The fifth time proved to be a charm for the Santa Fe Indian boys’ basketball team.

The Braves finally toppled Santa Fe St. Michael’s after five tries, winning 48-35 in the New Mexico Class 3A state semifinals at Dreamstlye Arena, “aka the Pit,” on Friday before a near capacity crowd.

The St. Michael’s Horsemen entered the state playoffs as the top seed but it will be SFIS playing in the 3A championship game on Saturday at 12 p.m. in Albuquerque.

“I told the boys that we almost have to play perfect to beat a team like that,” SFIS coach Jason Abeyta said. “We nearly did play perfect but at the end of second half we had a few mishaps but we forget, sometimes, that these guys are high school kids.”

After St. Michael’s got within 36-30 early in the fourth, SFIS got some key offensive boards to go up 40-31 with 5:46 left on a putback by senior post James Bridges, who finished with 19 points and 11 rebounds.

With a sizeable margin, SFIS opted to eat some clock and that almost backfired as the Horsemen got within 40-34 after Braves’ turnovers.

Nonetheless, SFIS got some friendly bounces to go their way as St. Michael’s was on the verge of stealing the ball. Instead, the Braves capitalized on some broken down defensive plays to stretch the lead to double digits. 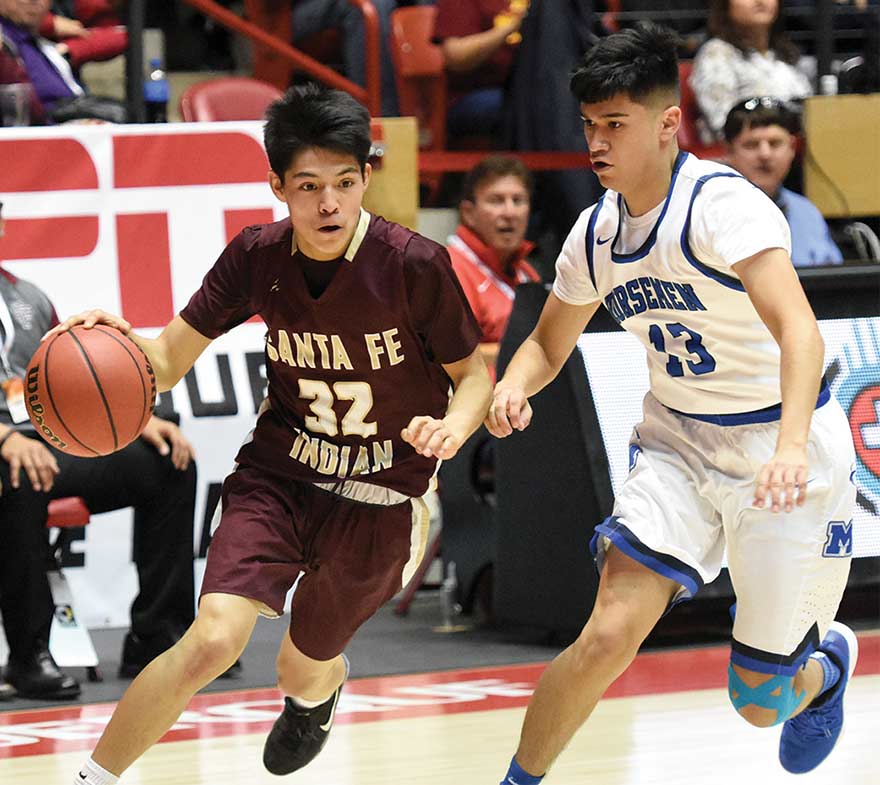 Santa Fe Indian Brave Shaun Riley takes the ball down court during the New Mexico Class 3A semifinal game on Friday in Albuquerque.

“We were just able to execute there at the end,” Abeyta said. “I mean these guys took care of the ball and they did what they needed to do.”

Early in the contest, SFIS nailed 5-of-6 shots and got some friendly rolls at the 3-point line for an early advantage. A trey by Bridges at the top of the key midway through the opening quarter earned the No. 4 seed a 13-4 advantage.

The Braves tacked on two more treys to start the second quarter, upping the advantage to 23-10 on a baseline swish from senior guard Anders Pecos with 3:29 left before halftime. 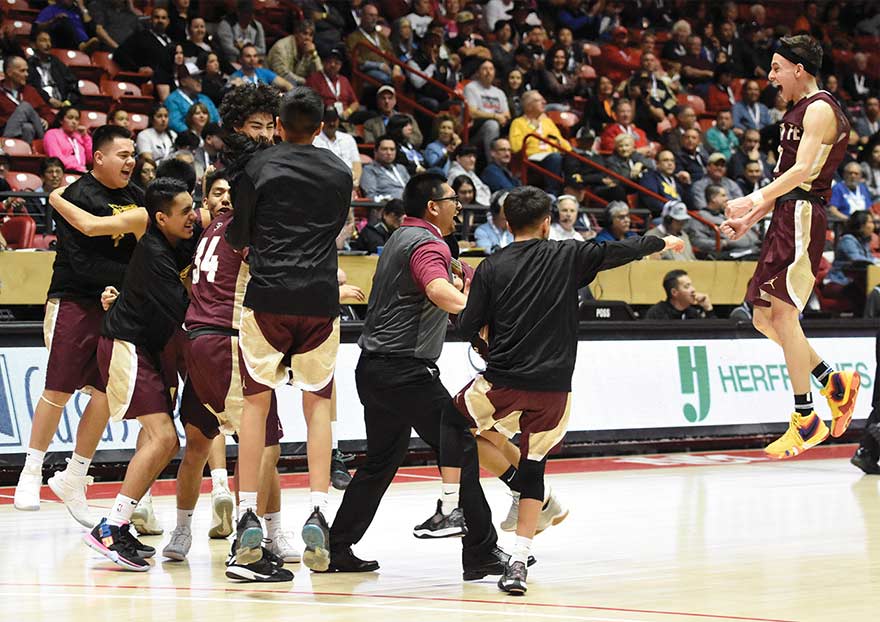 The Santa Fe Indian School Braves celebrate their win against St. Michael’s on Friday afternoon during the New Mexico Class 3A semifinals. The Braves defeated the St. Michael’s Horsemen, 48-35.

“It was huge coming out with the momentum, especially with all the support we have gotten,” said Abeyta of his team’s sizzling start. “I think we got the crowd into it and I think that helped us a lot.”

The top-seeded Horsemen, however, closed that gap considerably on an 8-0 run. St. Michael’s freshman forward Devin Flores got the rally going with a pair of free throws. The Horsemen then completed the run by shooting the ball near the basket as they cut SFIS’s lead to 23-18 at the half.

St. MIchael’s trimmed the lead down even further at the start of the second half, as they pulled within 28-27 when senior Jacob Royal hit 1-of-2 free throws with 3:36 left in the third.

SFIS, however, punched right back with a quarter-ending 9-2 run to go up 36-29 heading into the fourth with Bridges and senior Jaden Aguino aiding that rally.

Bridges admitted he got scared for a moment when St. Michael’s cut the lead down one point but he had a lot of faith in his team.

“I really thought we were going to let this go but I knew my teammates can take on these type of situations into their hands,” the SFIS senior said. “Like my coach says, I have that fire in my eyes and I just started to hit.”