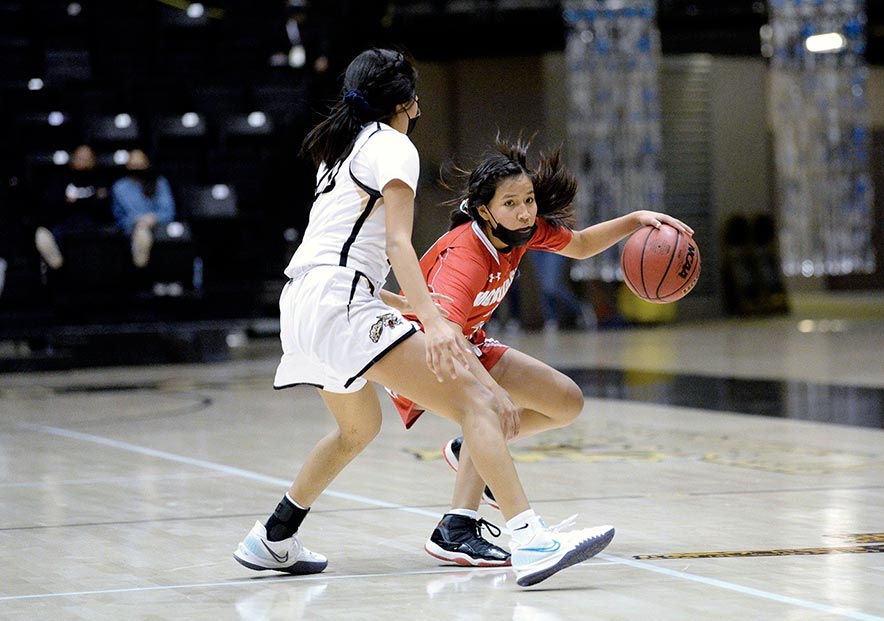 There was a light crowd at the Wildcat Den Friday night as the basketball teams played their Winter Homecoming games.

With the COVID-19 omicron variant spreading, the school took precautions to mitigate risking exposure and encouraged fans to follow precautions.

The Chinle basketball teams went up against the Monument Valley Mustangs, and despite the small crowd, there was no lack of cheers.

The girls’ game started with Lady Mustang Sheridan Curley making the first basket with a free throw. Chinle’s Shaundiin Yazzie responded by making two free throws of her own. The Lady Wildcats took off to quickly secure the lead and put distance between them and the Lady Mustangs. Lady Wildcat Lashanye Benally made the first 3-pointer of the game, followed by Qoah Yazzie. The first quarter ended 19-4 for Chinle.

However, in the next period, Monument Valley found its rhythm and made advances. Shyrai Shorty made the first 3-pointer for the Lady Mustangs. Angel Holiday, Kierra Johnson, and Curley each made 3-pointers in the final 3 minutes of the period. Despite its rapid gains, Chinle won the second quarter 33-28.

In the final period, Chinle made fouls that put the Lady Mustangs on the free-throw line, inching them closer to the lead. Chinle tried to respond, but the Lady Mustangs’ defense was making it difficult. At the one-minute mark, Lady Mustang Paris Littleben’s basket put them ahead of Chinle, 54-53.

Chinle raced to get ahead in the final seconds while the Mustangs tried to run the clock. But a foul gave Ashley a chance to two successful free throws, winning the game for Chinle 55-54.

Despite the win, the Monument Valley girls are currently ranked No. 3 in the 3A North region, while Chinle is ranked No. 5.

Still, girls coach Francine McCurtain was proud of her team’s performance, even if it got very close in the end.

The defense got a little loose as the game went on. During the final period, the girls lost some of their confidence.

Still, McCurtain credits them with a good start. She commends Ashley for her leadership and maintaining contact with the ball and Shaundiin Yazzie for keeping her composure which helped the team take care of the ball.

“So, you can tell that the game and intensity got to the girls, but we were lucky and able to come out on top of this one, but it is a much-needed win,” McCurtain said.

“It feels good to be back in our home court and get a win. I hope the girls continue to use this as a confidence builder and to move on and take to the next game.”

Mustangs pull away after six ties

The teams ran back and forth for a full minute for the boys’ game before Kay Phillips made the first basket for Monument Valley. 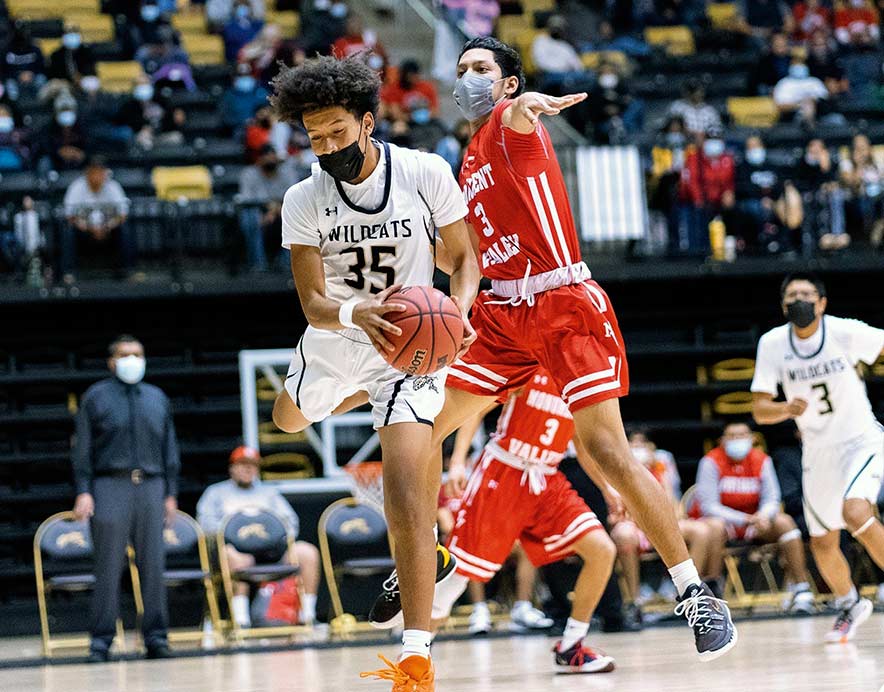 Brent Benally made Chinle’s basket a few seconds later and tied the game 2-2. It tied again at 4-4, 11-11, 13-13, and finally 15-15 by the end of the quarter, exciting the crowd. Andrew Sheppard scored the most for Monument Valley with six points. For Chinle, Kyleu Yazzie scored the most, also with six points.

In the second period, Chinle tied one last time at 17-17 before the Mustangs started pulling again. The Mustangs began to find cracks in Chinle’s defense and started to outshoot them. The Wildcats chased Monument Valley before the first half ended 38-32 for the Mustangs.

Trevor Benally scored 15 out of the 17 points made by the Wildcats, including three 3-pointers. For the Mustangs, Nahvonie Gray scored the most with 10 points, including 2 3-pointer shots.

During halftime, Chinle held its coronation for winter homecoming royalty. Varsity players Jarvis Woody and Ashley from the girls’ team were voted the title king and queen, respectfully.

Chinle increased its defense in the third quarter and slowed the Mustangs’ advances, but it continued to score. Chinle was close to its heels, but the Mustangs pulled a narrow win in the third period with 52-49. Sheppard led the score again for Monument Valley with 8 points. Tristian James led Chinle’s points with 7.

The Wildcats briefly turned the tide in the fourth quarter with well-placed shots, bringing it to 53-52. However, the Mustangs retook the lead and put distance between them and Chinle. The Wildcats continued their pursuit, but the Mustangs didn’t stop. Wildcat Trevor Benally made the last shot of the game, a 3-pointer, much to the thrill of the crowd, but the Mustangs took the win with 71-63.

Woody led Chinle with the most points, scoring seven in the final quarter. Monument Valley’s Albrandon Byjoe led with 9 points.

Mustang Coach Randolph Gilmore was pleased with the win, especially since the team lost a previous game against Chinle. He thanked the Wildcats for the game and called them a well-coached team.

“We played more patient on offense, and we were more disciplined on defense,” Gilmore said. “We still made some errors and mistakes, but overall, I think we did a good job in the second game against Chinle.”

Gilmore said his team was short on players, but he congratulated the players who stepped up during the game and helped secure the win.

After losing Roberto Flores due to foul troubles, Gray stepped in and helped turn the game into a great defender and shooter. On the other hand, Keiyan Mann did a great job on offense and becoming more confident with each game.

“But overall, I think everyone did a great job, offensively and defensively,” Gilmore said. “We are starting to play more team basketball, and this is what we will need if we want to do good in the second half of the season.”