Chinle shows No. 1 status in win over Wingate 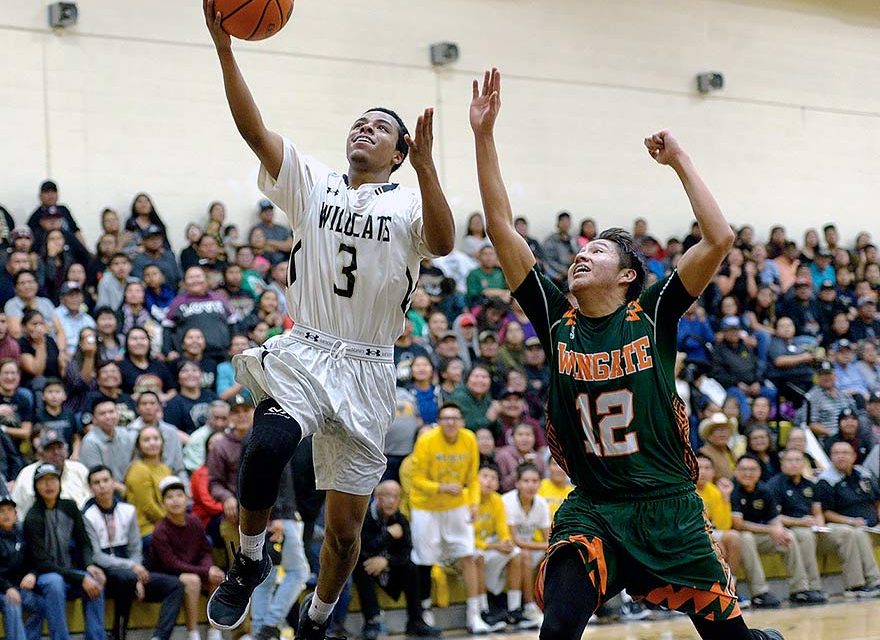 The telltale signs of being the No.1 ranked team started to show in the second quarter.

It took some time for the Chinle boys’ basketball team to get going on Tuesday night, but on the strength of their defense the Wildcats beat Wingate 53-34 in a rare interstate basketball game.

Chinle outscored Wingate 20 to 3 in the second quarter to erase a one-point deficit for a 33-17 lead at the break inside a packed gym at Chinle High School.

Due to a water break over the Christmas vacation, the Wildcat Den is out of commission as school officials are scrambling to repair the warped gym floor in hopes of having it available for the 3A North Regional tournament early next month.

“We were missing two of our starters so this was a new experience for some our kids,” Chinle coach Raul Mendoza said. “Our leading scorer was not here so basically it took them a while to adjust. Halfway through the second quarter they were, like, ‘Hey we need to get the job done.’”

Junior point guard Curtis Begay provided that spark, as he pumped in 12 of his game best 23 points in the second quarter.

“I thought Curtis did a great job tonight,” said Mendoza, whose team improved to 18-4 overall. “He kind of took over and after that the whole team started to participate.”

Senior wing Jason John was just as effective as he finished with 19 points.

After battling Wingate in the opening quarter, the Wildcats shifted into another gear midway through the second stanza as they stretched 19-14 cushion into a 30-15 advantage on a three-point play by John with 51 seconds left in the half.

Begay capped Chinle’s run with a trey before Wingate got a much-needed basket from senior post Parrish Miller at the end of quarter.

Longtime Wingate coach Al Martinez said the defensive pressure from Chinle got to his team.

“You know, their pressure is probably the best pressure we’ve seen all year,” Martinez said. “Their No. 1 for reason. And I’m pretty sure they’ve been able to turn everybody over like they did to us tonight. I’m guessing we had 23 turnovers but we probably had more than that.

Martinez said his team fought but the 17-point swing in the second quarter was too much to overcome.

“The difference in the game was in that second quarter,” he said. “They got us because after that we played them even. I am real proud of the effort tonight.

“We’re still trying to develop our game a little bit,” he added. “Offensively we’re not hitting shots but you know the kids listened and they played hard. As a coach that’s all you can ask for.”