‘Everybody knows who Beaver is’: Navajo in Wyoming breaking records, melting hearts 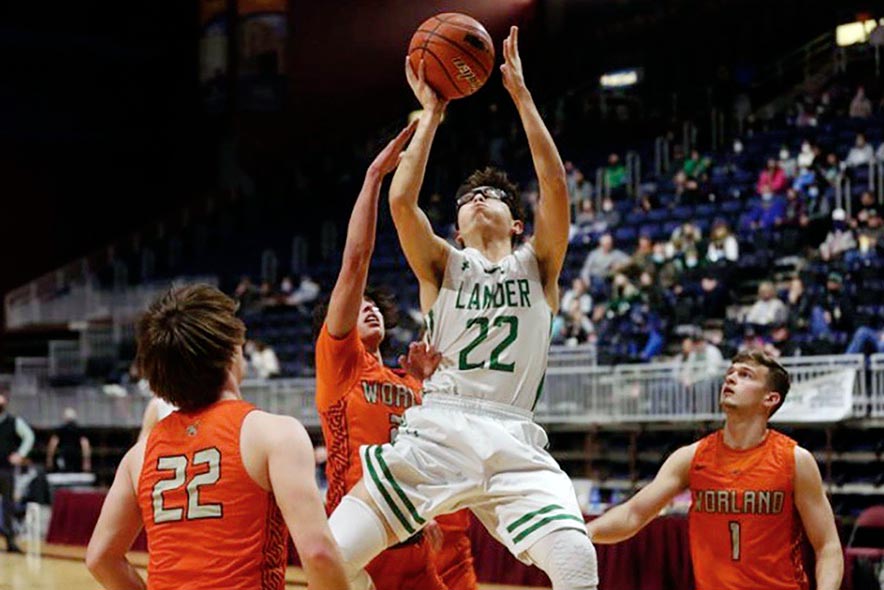 He has family in Wyoming, Arizona and Oklahoma. But aside from having a diverse culture and a large family, Bryan is a stellar athlete who recently scored his 1,000th point in his basketball career.

Bryan started playing with the varsity boys at Lander Valley High, 10 minutes away from Wind River.

Starting out as a sophomore in 2019, Bryan was a part of the Wyoming 3A basketball champions in 2019 and was All-Conference and All-State selection for 3A basketball in 2020.

In 2021 his team came in 4th place at state and he is an All-State and All-Conference selection for 3A basketball. He is also the first Native 3A player of the year from his school.

He also has fun in track and field and in 2019 the team placed 4th place with him competing in the long jump.

“I’m very proud of my accomplishments,” Bryan said. “Everything I have done that’s what I put the time in for, that’s what I worked for. My dad always taught me to be like that – ‘You put in the hard work and it pays off’ – and it really does. I’m really glad that I was able to accomplish as much as I have in my high school career.”

He was born in Fort Defiance but his family decided to move to Fort Washakie when he was young so that they could be closer to Bryan’s maternal grandparents. Despite this, Bryan remained close to his Diné relatives and says Canyon de Chelly is one of his favorite places to visit.

Bryan would then go to elementary and middle school in Fort Washakie before transferring to Lander Valley High so he could participate in its sports program. The transfer was somewhat of a challenge for him as there weren’t many Natives there.

“When I transferred over to Landers, I was the second Native kid in that school in my grade,” Bryan said. “Being Native, my heritage and everything have played a big role in what I do and why I play and why I love the game and everything. It’s a part of my heritage, my culture.”

Bryan thrived in both academics and extracurricular activities like choir and clubs such as Idaho Select which tutors skilled basketball players. He has always been an active boy from a young age. Both his parents were athletes as well as his older siblings. Bryan has been playing basketball since he was 4 or 5 years old, and according to Lander Valley head boys’ coach Stu Mullins, he was a big part of their team.

“He is extremely skilled: He can shoot at all three levels, can hit threes, and he’s learned to finish a lot better round the basket,” Mullins said. “And he’s definitely got some style to him … He’s got the big goggles on and he always plays with a smile and his personality is definitely infectious. Everywhere we go, everybody knows who Beaver is.”

Beaver is Bryan’s middle name, but people use it as a nickname, from family to friends and opponents alike. Few actually know Beaver is the name of Bryan’s uncle.

Bryan describes himself as a very competitive individual, but most people know him for his caring and energetic attitude.

“He takes things seriously, but not too seriously,” Mullins said. “He’s a good friend and a good teammate. He does thing the right way, I think from an early age his parents have done a good job with him as far as encouraging him to try out new things.”

His parents, Viola and Darwin St. Clair, are proud of their son’s accomplishments, but even more of his humble and caring personality.

“He’s outgoing, he’s kind, a very friendly guy,” Viola said. “After every game the first thing he does is he goes up and give his Másání a kiss or a hug. … He meets people pretty much everywhere he goes and … he is friends with all different kinds of kids and ages.”

Bryan always put in the effort to do his best. He was always going to summer camps, staying for extra practices and exercise on his own. But he also made sure he was having fun while doing it.

“I’m very proud of him, and this year he did get a letter in academics and I’m proud of all his achievements and the stuff he does because I don’t know if people understand the time that it takes him to do it,” Viola said. “It’s more than just going to practice, but when he’s doing the musical, sometimes he’s having to grab a bite immediately after school, going to practice and then getting straight over to musical rehearsal until nine at night and still make sure his school work is done.”

Bryan has received many invites to join collegiate teams, ranging from local Wyoming colleges to universities in North Dakota. He’s been getting offers to join basketball teams, track & field teams and sometimes both.

Bryan isn’t entirely sure what he would like to study. He’s leaning towards psychology, but he ultimately wants to learn something so that he could help his tribal community. He plans to learn as much as he can at college and bring it back to the reservation and inspire other kids to follow in his footsteps.

Bryan’s list of accomplishments could have been longer, but like with everything else last year, COVID-19 ruined everything. Bryan and his friends were literally on their way to the basketball championships when their bus turned around, called back when Wyoming went into lockdown.

Bryan then spent six months in quarantine, unable to play sports or hang out with friends. Nevertheless, his whole family, including himself, contracted the virus and he missed a late cross-country season. Lander would go on to win at the championship but it bummed Bryan that he wasn’t there to be a part of it.

“What made it so scary was that I was worried about my grandma and my dad,” Bryan said. “I didn’t know how it was going to affect them and I was scared, but it has really been a long trip and it’s something I’ll never forget and it taught me many things too …

“I’m just very fortunate I was able to have a basketballs season and a track season going on right now too, because I know many kids didn’t get a season. I really do thank the creator for blessing me and letting me, letting my family recover, and for letting me play my senior year.”

During the pandemic, Bryan’s care and love for his family stood out.

“That was a lot for a 16-year-old to deal with because everything just ended abruptly but also internally as a family after that,” Viola said. “Transitioning to online schooling and then our whole family ended up getting COVID and it was scary.”

Bryan’s father and grandmother both ended up in the hospital, Viola said tearfully. “And (Bryan) really stepped up and was very helpful especially when my husband was in the hospital.”

Darwin admires his son’s selflessness, especially a time when he declined to go to a basketball tournament in Salt Lake City even though it was something he always enjoyed. The city was a COVID hotspot and Bryan didn’t want to risk bringing the virus back with him and endangering his grandmother.

“I was very impressed by his leadership and his ability to think of somebody else besides his own needs and wants,” Darwin said. “He isn’t a selfish person, even on the court he’s like that. If you were open, he was going to pass you the ball, he wasn’t worried about winning and not about what his stats was going to be.”

It was during Bryan’s final high school game that he got to score his 1000th point and he almost forgot about it. At the time he was more focused on helping his team win the game when two opponents came out of nowhere and knocked him down hard. He was hurt, but he kept playing. Not until well after he reached that milestone did the feeling finally hit, and even now it’s still hard for him to believe.

Bryan gives thanks to his schoolteachers, principals and coaches on the Wind River Reservation and at Lander High, along with all of his fans who supported him through the years, including the coaches of other schools who voted for him to be player of the year.

Bryan gives a lot of thanks to his family for helping him, inspiring him and loving him. It may sound overwhelming having a large family in three states with just as many traditions, but Bryan wouldn’t trade it for anything in the world.

“I’m happy I’m four different tribes,” Bryan said. “I’m happy to be Eastern Shoshone, Navajo and Cherokee because it gives me more to learn about each morning. … To be Native American in general, that’s a big part in my life.”