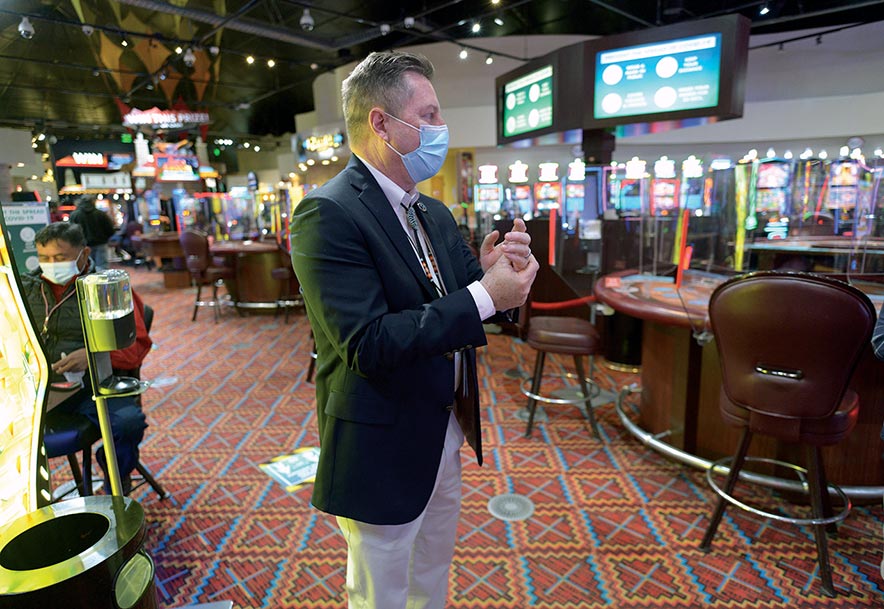 After years of advocacy by a large coalition of nonprofits, health organizations, government officials and traditional practitioners that have promoted anti-smoking policies for Navajo, the Navajo Nation Gaming Enterprise casinos are finally opening up smoke-free.

This could potentially lead to a ban on commercial tobacco use in public places for the whole tribe since the casino stance on smoking has served as a bellwether and a deterrent for acceptance of no-smoking policies on the Nation. After being closed last March due to COVID-19, NNGE’s Fire Rock and Northern Edge Casinos opened the doors March 19 with a new clean air policy. “

We’re really excited that the Navajo Gaming Enterprises have decided to reopen commercial tobacco smoke-free,” said Patricia Nez Henderson, vice president of the Black Hills Center for American Indian Health, and an expert in the field of commercial tobacco control and prevention.

“We’ve been at this since 2008 and there have been so many people that supported this effort throughout the years, from traditional healers to elected leaders,” she said. “Their heart is in the right place when it comes to health.”

NNGE CEO Brian Parrish said that shift in policy at this time is primarily related to COVID-19 safety protocols. “When we knew it was time to reopen we were not going to allow folks to smoke or use smokeless tobacco inside the building,” said Parrish. “We have designated smoking areas outside that are covered and sheltered, but there’s no smoking allowed inside the buildings.”

Henderson said the new smoke-free policy will protect casino employees from second-hand smoke from cigarettes, which is even more toxic than exhaled smoke, and contains around 70 cancer-causing chemical additives. “Any type of exposure to second-hand smoke is certainly a trigger,” said Henderson. “With Navajo Nation, we’ve had so many COVID cases. We just don’t know what effect that will have on the body long term, especially the lungs.”

Henderson said advocacy groups are hoping the new policy will represent a permanent change. She encourages the Navajo people to advocate for that too. “Go to your Council delegates, the president and the gaming enterprise and let them know that you’re thankful that they’ve made this decision, but that you want a permanent policy in place to protect not just yourself and your family but future generations,” she said.

While the public health benefits of going smoke-free are now well understood, the gaming industry has generally lagged behind in adopting comprehensive smoke-free policies even though employees and patrons are exposed secondhand smoke are at great risk for cancer and cardiovascular disease.

Since 2006, when the NNGE was founded to develop and manage casinos, the organization has mostly resisted the effort to go smoke-free, primarily citing it would negatively impact casino revenues, which has served as a key barrier to implementing a comprehensive smoke-free policy on the Nation.

The “Team Navajo” coalition, also formed in 2006, identified the lack of a smoke-free policy on Navajo as a major public health issue normalizing the use of tobacco products and increasing the likelihood of diseases and death among smokers and those who are exposed to secondhand smoke. According to the CDC, American Indians/Alaska Natives have the highest prevalence of cigarette smoking compared to all other racial/ethnic groups in the United States and therefore have a higher risk of tobacco-related disease.

Per the Truth Initiative, as of May 2020, AI/AN adults had the highest smoking rate in the U.S. at 22.6% compared to 13.7% of adults overall, with AI/AN high schoolers at 16.2%, compared to 5.8% overall, and middle schoolers at 3.7% compared to 2.3% overall in the country. While federally recognized tribes are exempt from state tobacco laws, they have the authority to adopt their own laws to regulate smoking on their tribal lands.

Comprehensive smoke-free laws, which have proven to be effective at protecting non-smokers and reducing tobacco use, including among youth, yet have not been widely adopted by tribal governments across the Nation.

The states of Arizona, Utah and New Mexico passed smoke-free laws over a decade ago but the Navajo government has yet to implement a global smoke-free policy. In 2008, Team Navajo drafted legislation aligned with Navajo Nation Fundamental Law, which laid out the detrimental effects of commercial tobacco on people and their right to live in a healthy environment, while respecting the role of “nát’oh” for ceremonial purposes.

Public health advocate Hershel Clark, spokesperson for Azee’ Bee Nahagha of Diné Nation, said from a cultural point of view it is important to distinguish between sacred tobacco made of medicinal herbs used for ceremonial and healing purposes from addictive commercial tobacco filled with chemical additives and used recreationally.

The Navajo Nation Council did adopt the Navajo Commercial Tobacco-free Act of 2008, but with pressure from the NNGE, the act was vetoed by former President Joe Shirley Jr. who said the policy would put Navajo casinos, just starting up at the time, at a disadvantage economically, and that there was too much ambiguity between what defines ceremonial and commercial tobacco.

“It got really political in 2009 under the Shirley administration,” said Clark. “The reasons given for not going smoke free at that time were there was no funding for enforcement, that it would infringe on bonafide use of ceremonial tobacco by traditional practitioners, and it would be detrimental economically to the casinos.”

A second effort to pass comprehensive smoke-free legislation failed in 2009. Then in 2011, President Ben Shelly signed an executive order prohibiting the use of commercial tobacco in public spaces and workplaces, including casinos, but that was nullified by the Department of Justice that determined that Shelly was overreaching his authority.

As of now, the only existing smoke-free policy on Navajo that remains covers the executive branch only. “Chapter houses are covered, but any other businesses like restaurants, hotels, casinos, that is not included,” said Henderson.

‘The right thing to do’

However, now with COVID-19 the tide may be turning, tipping the proverbial scales in favor of smoke-free policies across the United States.

Clark, who is also program supervisor for the Southwest Navajo Tobacco Education Prevention Project, said more than 200 casinos across the country have reopened smoke-free after being shuttered due to the pandemic. “One of the things that really came about during COVID was this national movement of tribal casinos opening smoke-free,” said Clark. “The ‘new normal’ is what they’re calling it.”

He credits greater public health advocacy and awareness. SNTEPP’s mission is to improve the health of Navajo people through commercial tobacco prevention, cessation and policy, while respecting the use of ceremonial tobacco, and collaborates with other nonprofits such as Americans for Nonsmokers’ Rights and Air is Life. “It’s been a grassroots effort from the get-go,” said Clark. “We’ve been educating people about exposure, particularly now with COVID. People are more aware of their surroundings and want a smoke-free environment.”

Even Foxwoods Casino Resort in Connecticut, one of the largest casinos operated by the Mashantucket Pequot Tribal Nation, went smoke-free in the summer of 2020, said Clark. “They’ve been very instrumental in getting the word out to the rest of the tribes that this can be done and it’s a great time for casinos to go smoke-free,” said Henderson.

In August Pequot Chairman Rodney Butler told CDC Gaming Report that the smoking ban was ‘just the right thing to do.’ “Every decision we’re making was from a health sense and keeping people safe,” said Butler. “The non-smoking (policy) was instrumental in gaining the confidence of the tribe, the tribal members, our employees, and our patrons to come back.”

Henderson said creating smoke-free environments also needs to be done in coordination with tribal health providers so that current tobacco users who are wanting to quit have access to counseling and pharmacotherapy. “Nicotine is a very powerful drug,” she said. “You can ask any person who is a multi-drug user and they’ll say that of all the drugs they have been on, quitting smoking is probably the most difficult thing to do.”

Addressing trauma, including from the pandemic, is also a key component moving forward. “For me as a Navajo scientist, one of the things that we’re realizing is that there’s a strong connection between trauma and addiction,” said Henderson. “We know that nationally rates of smoking have gone up because of the pandemic.”

Parrish said he is optimistic that if the downward trend in COVID-19 cases continues, in a couple of weeks operating capacity at the casinos, now at 25%, can be expanded. “Hopefully we can go to 50 percent, offer food and beverage, and then we’ll open Flowing Water and Twin Arrows and bring all of our staff back,” he said. “The nice thing is the energy levels in the properties are really high,” he said. “Our team is so glad to be back and working and our patrons are excited to come in.”

With any luck, the casinos will flourish into the future while remaining smoke-free. “If this decision is a permanent one, then we’ll be very happy,” said Henderson.