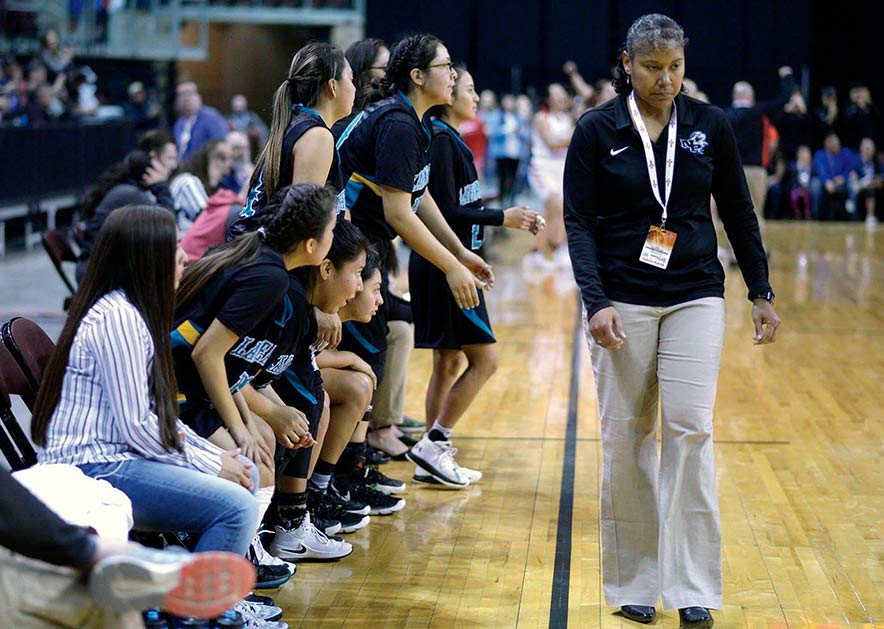 File photo
In a rare moment, Navajo Prep coach Rainy Crisp coached against her counterpart Tanisha Bitsoi in the New Mexico Class 3A girls’ finals on Mar. 11. The two Diné female coaches reflected on the significances of facing each other in the state title game.

Between waking up on championship Friday and stepping onto Dreamstyle Arena, Rainy Crisp realized something.

Not that the Navajo Prep coach was on the cusp of winning a second state basketball title or that her team was back at the Pit after an 11-year absence, it was that she was about to coach against another female Navajo coach.

Crisp said she realized that she and Tohatchi girls’ basketball coach Tanisha Bitsoi were about to take part in a special experience — two Diné coaches coaching Diné teams in a state title game.

She reached out to Bitsoi via text about an hour before the game.

“I just wanted to wish her the best of luck as well and that we would always have each other’s back as well,” Crisp said. “I did tell her that two female coaches making it to state and coaching in the state playoffs is awesome and she responded, ‘Two Native female coaches.’”

Bitsoi said Crisp reached out to her and when they saw one another at the Pit, it was an awkward embrace.

“When I actually saw her it was just us two in the hallway, it was funny,” Bitsoi said. “That’s when I realized I was, like, ‘This is really neat.’

“Not only is it two Native women in the championship game but two teams from the same district,” she said. “The whole thing, it became bigger than what it was.”

The two went head to head in the title game, which ended in Navajo Prep’s favor.

While Crisp basked in the victory, she thought about how much bigger the game was simply because she and Bitsoi were there pacing the sidelines.

“It’s something that you don’t see very often, especially at that state championship level,” she said. “It was two competitive coaches just going out there and coaching their hearts out.”

Crips, who is a few years older than Bitsoi, learned of her before she became a coach. They played in the same basketball tournament circuit and even played on teams together.

Crisp said she’s admired Bitsoi since she took over the Tohatchi program over five years ago.

“Ever since she started coaching at Tohatchi she has really brought that program alive,” Crisp said. “She has developed them and took them and that program at a whole new level, where it is right now.” 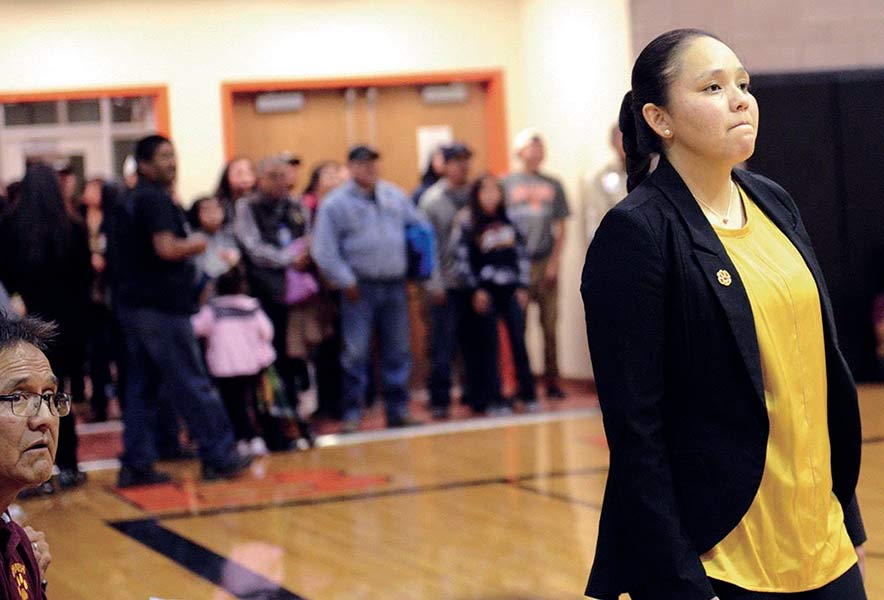 Bitsoi said she knew little about Crisp and her Arizona State University basketball days, even though she also played college basketball.

From there their friendship bloomed. They didn’t just cross paths in local tournaments but eventually as coaches, standing on opposite benches on the sidelines.

Crisp said it wasn’t long before the teams and coaches built a friendly rivalry.

“Since she’s been coaching the district games have been turned into rivalry games,” she said. “We have a packed gym every time we play each other.”

And off the court, their friendship blossomed.

Bitsoi said they got to know one another as female Navajo coaches coaching teams of young Navajo women.

Crisp said their growing friendship is what prompted her to text Bitsoi just before they faced off in the title game.

“It’s just more of that history that Tanisha and I have. There’s not many people that know that we’re friends,” Crisp said. “That friendship will always be there and she has had my back in so many ways. So I just wanted to reach out to her and just let her know that, yes, we’re here … it’s a special thing for us.”

Bitosi said it wasn’t until the middle of the game when it hit her.

“I think it was at halftime, we came back down and across, I saw her assistant coach Jessica, who’s the same age range as me and I played against her in high school. It did cross my mind,” Bitsoi said.

“Now that I think back on it, I thought it’s important for future generations of Native women to lead a group of women like we do, try to be a platform for everybody else,” she said.

Crisp said that’s exactly what made it a special occasion.

She said she too recognized the importance of that moment for her team and for Native young women everywhere.

“It’s just our way of just giving back to our community, to our Native youth,” Crisp said. “It was great to see two female Native coaches at that level. What better role models for our youth to have. It is something I believe that is just shows our youth that they can get to that level.”

She added that she took the time to greet the Tohatchi players as she would have greeted her own players.

“I gave each one of them a hug and told them they did a great job,” she said. “It doesn’t matter that we’re from different schools. I definitely saw them just as girls playing a game that they love and, of course, in any sport there’s going to be a winner and a loser, we happened to come out on top this year. But I wanted to be there to support them, too.”

Bitsoi said their friendship brought a new meaning to the title game.

“We’re just trying to use what we can to influence better, to try to help our people,” she said. “It’s not common, I feel like, across the state, there’s more men coaching.

“It’s important for our younger generations,” she said, ‘for them to look up to us.”