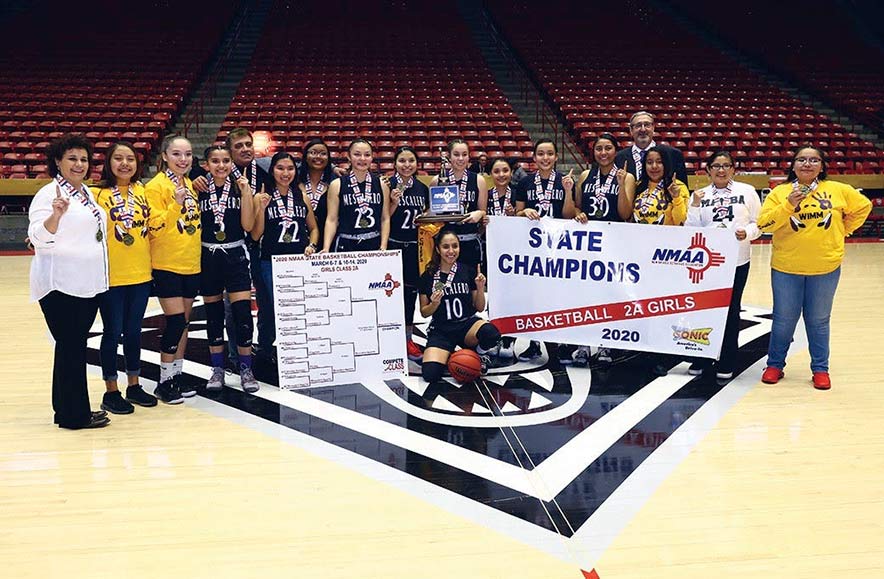 Special to the Times | XL Sports Photography
The Mescalero Apache Lady Chiefs finished the season as the New Mexico Class 2A champs after defeating No. 1 seed Peñasco by a 69-54 count.

Losing a state title game was all the motivation the Mescalero Apache girls’ basketball team needed.

Last year, they lost in overtime to Pecos, 53-46, in the championship game.

The Lady Chiefs didn’t want to experience that same feeling so they took upon themselves to upend top-seed Peñasco by a 69-54 count last Friday in a rather quiet Dreamstyle Arena with no fans for its first state crown.

“Last year all of us came back into the locker room knowing that we could have won so it was heartbreaking,” Mescalero Apache senior Fallon Velasquez said. “We just had one goal in mind and we just took it game by game until we got here. All the stuff that was in front of us didn’t matter, we just had to stick together.”

Fellow teammate Ramona Fossum chimed in, “I’m so happy to bring this back to my community because they all helped us to get this.”

Both players said it was tough to not have their fans in attendance as the New Mexico Activities Association decided to complete the last three days of the state tournament without fans due to the COVID-19 pandemic.

“Our fans are a big part of our team and to get them taken away from us was tough,” Velasquez said. “But we all came so much closer together this week. We just came out there and do what we had to do.”

In their state title run, Mescalero Apache coach Elmer Chavez said his team stayed the course even though they struggled to find any offensive rhythm in the opening half.

The Chiefs erased a four-point halftime deficit and turned it into a 48-38 lead heading into the fourth.

“I told the girls to keep shooting, eventually those shots were going to fall,” said Chavez, while noting that in the second half they were less stagnant in their offensive sets.

“We were just standing around in the first half,” he said. “I think with having no fans here we were dead.”

With a much deeper bench and fresher legs, Chavez said he challenged his girls to keep pushing the ball.

“We kept attacking and in the second half once we got it going there was no stopping us,” he said.

In the third quarter alone, Mescalero Apache outscored the Panthers 24 to 10. And with Peñasco having a hard time keeping up, the Chiefs carried that momentum into the fourth in their 15-point win.

The Chiefs, who enjoyed a 17-of-21 effort at the free-throw line, had six players score headed by the double-double turned in Velasquez, who finished with 32 points and 10 rebounds.

For Peñasco, Carly Gonzales finished with 18 and Adrianna Tafoya helped out with 14.

With the win, Mescalero Apache finished the season with a 28-3 record. Since taking over the program, Chavez said his kids have amassed 128 wins.

“We’ve done very well and that’s because they have dedicated their lives to being great basketball players,” he said.