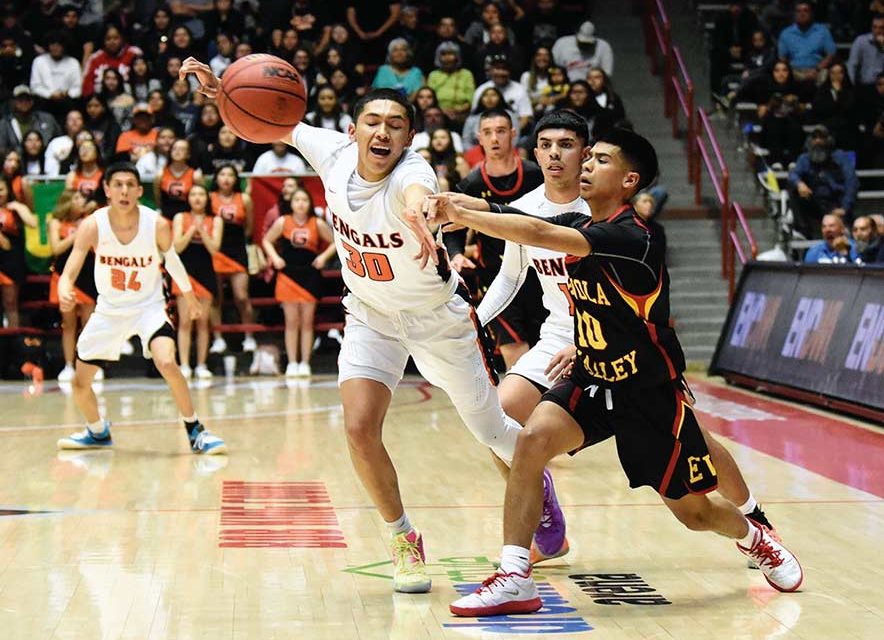 Navajo Times | Ravonelle Yazzie
Gallup Bengal Joaquin Ortega leaps forward in an attempt to steal the ball away from an Espanola Valley player last Wednesday night during the quarterfinal round of the New Mexico Class 4A boys state tournament at the Dreamstyle Arena in Albuquerque. Gallup reached the state semifinals, losing to Albuquerque Highland.

The Gallup High boys’ basketball 2019-20 season came down to responses they didn’t have.

The No. 2 Bengals faced a tough No. 3 Highland in the semifinals of the Class 4A state championships and fell short, 69-49.

Gallup coach Josh Dunlap said his team was as prepared as they could be but simply didn’t have all the answers they needed to defeat Highland.

“The big talk was that they were super talented, and we would have to play one of our best games,” he said. “The big focus was their big guy, Jose Murillo, who is 6-9. Our guys have never played anybody that big. We didn’t really have an answer for him.”

Gallup looked promising at the start of the game, keeping a step ahead of Highland and leading 14-13 after one quarter.

The Bengals continued to dominate at the start of the second quarter, but Highland increased the pressure and challenged Gallup. Highland led 30-27 at the half.

Dunlap said things still looked promising for the Bengals going into the half. He said they executed in all areas they discussed but needed to continue it going into the second half.

After a short back and forth on offense, Highland took over in the third quarter, making a 11-0 run to lead 46-31 midway through the quarter. Gallup battled back while Highland extended their lead to 55-32 after three.

Dunlap said it wasn’t easy to coach his team after the third quarter as they seemed deflated.

“The 6-9 kid just grabbed it and dunked it. We tried to keep our head up but we didn’t have an answer,” he said. “I could see it on their faces. When I saw we were down 15, we knew it was going to be an uphill battle.”

Gallup did what they could in the final quarter, but Highland extended their lead even more and ran away with the 69-49 win.

Dunlap said his team continued to work until the final buzzer.

“Our leaders, our seniors, they knew they wanted to play our best. We kept talking about how important it is to finish strong for our returning players,” he said. “To make sure we use this experience for next year.”

Dunlap said his team could have also used their sixth man, the Gallup fans, to help them through their downs in the game.

He said while it is not an excuse, it was indeed a factor in the team’s overall success.

“I don’t think other coaches can relate as much as we can because they don’t bring 10,000 fans to the Pit, but I thought that fact was huge especially in our win against Espanola Valley,” Dunlap said.

“It was kind of eerie at the Pit,” he said. “It was a very weird game. When we get to rolling on our press and when the crowd is so loud we can’t call anything, I really think it helps us on the court. Nobody can deny 10,000 people screaming for you, it gives you some kind of energy.”

The Bengals ended their season 25-6 overall and 10-0 in district.

Dunlap said the team was nothing less than successful this season. He said they had continued the tradition of returning to the playoffs and took a step closer to ending up in the finals.