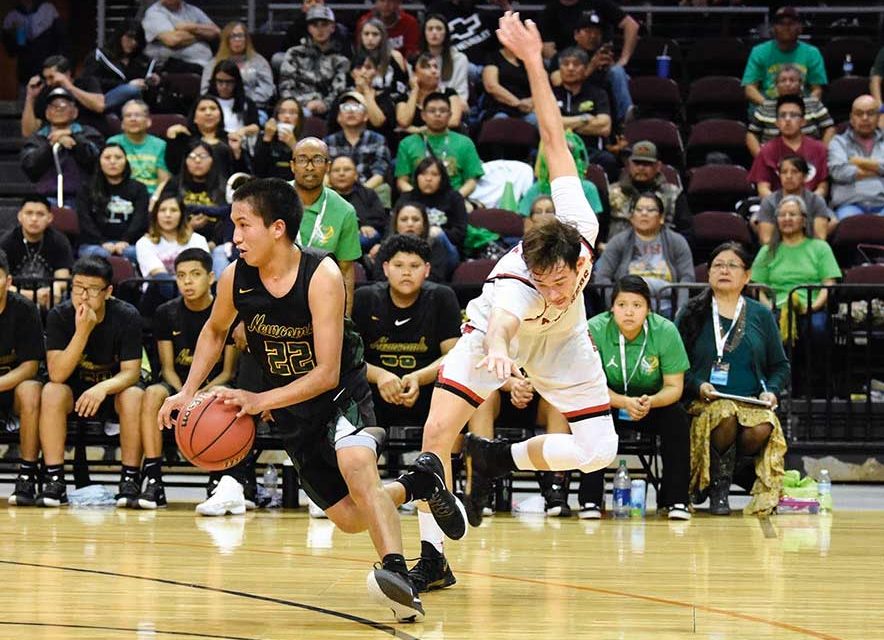 Navajo Times | Ravonelle Yazzie
Newcomb’s Deondre Begay reverses the ball in attempt to get away from a defending Menaul Panther on March 11 during the quarterfinal round of the New Mexico Class 2A boys state tournament at the Santa Ana Star Center in Rio Rancho, New Mexico.

For many, the Newcomb boys’ basketball team didn’t belong in Dreamstyle Arena.

Some said they were too small, some said they had had their Cinderella season, and others said they didn’t have what it takes to compete in the Pit.

But they did it anyway.

Though the No. 5-seeded Skyhawks fell short, falling to No. 1 Pecos 80-47 in the Class 2A semifinals, they accomplished what they wanted to.

Newcomb head coach Dominique Richardson said they had vowed to return to the Pit and they kept their word.

“The kids were excited to play back in the Pit,” Richardson said. “People around were thinking we didn’t have a chance to get back to Albuquerque to do what we did, but we did.”

Pecos came out running in the first quarter with an 8-0 lead, leaving Newcomb having to bounce back.

The Skyhawks put up a three-pointer for their first points of the game. Pecos led 16-10 after one.

With their shots falling short, the Skyhawks leaned on their defense, but Pecos still managed a 9-0 run to start the second quarter. Pecos led 36-17 at the half.

Richardson said the team started the second quarter within reach until Pecos threw a wrench.

“The first four minutes of that second quarter they kind of got us out of our rhythm,” he said. “Toward the end, we finally woke up.”

Newcomb carried their late-second quarter momentum into the third quarter and scored back-to-back to trail 36-21 to kick off the second half.

Pecos answered with a three-point basket and Newcomb spent the rest of the quarter staying afloat. Pecos led 59-33 after three quarters.

In the fourth quarter, Newcomb chipped at Pecos’ lead but ran out of time.

Richardson said there were some key moments where Pecos deflated his team, but at no point did they give up.

“In the third quarter we were down 17 but I think No. 14 hit a buzzer beater and that kind of took the life out of us,” Richardson said of senior Anthony Armijo. “My kids kept battling, kept guarding, they didn’t go out without a fight.

“Any other team probably would have given up,” he said. “They were getting rebounds, it was a good thing to see, that they kept fighting to the final horn.”

Having lost to Pecos in the title game last year, Richardson said the team knew they had to play top notch, but they didn’t expect to play a game similar to the one last season.

“It was déjà vu,” he said, “the year before where we had the same thing happen. I know they were bummed. I know a lot of shots they were used to taking didn’t go in. But they were happy, they were proud of their efforts.”

Most importantly, Richardson said the team realized something about themselves.

He said they found that they had accomplished more than many thought they could.

“They realized that it’s not the way you start, it’s the way you finish. We finished strong,” Richardson said. “We just talked about character, of where they grew up and how they wanted to prove a point to everybody.”

The team lost most of their core last season but this season they graduate the class that stuck with Richardson since he started coaching.

“Where they live at Newcomb, even in the first couple of years everybody was like it’s a one-year thing (to do as well as they did). It wasn’t one of those traditional powerhouse schools in the area,” Richardson said. “For them to prove it, for three years in a row, Newcomb’s up there with any other team in the area as well as the state, it speaks volumes for them.”

Newcomb senior Davien Begay said the team had some bumps in the road and knew they had some hardship ahead even at the start of the season.

He said they had missing pieces and leaned on younger players.

“Last year we were a more solid, tough squad compared to this year,” he said. “But we did accomplish a lot. It was just a great season overall. I couldn’t ask for anything better, we pretty much accomplished our goal.”

Newcomb graduates 10 seniors including guards Deondre Begay, Deontay Begay, and Deion Johnhat, all players that have been Richardson since he started coaching at Newcomb.

“It’s kind of tough, you’re going to miss some kids like Deondre, Deontay, who have pretty much been with you since they were eighth graders,” Richardson said. “Now I got to start right back over, which I’m excited about, a whole new batch.

He said the new group will have the task of finishing what the core group started.

“They wanted to prove that they can do some special things at Newcomb,” he said. “Now these new kids can create their own path, how they want to be successful.”