In a program steeped with tradition, the Gallup girls’ basketball team ended a 10-year drought on Saturday.

The fourth-seeded Lady Bengals outscored the Española Lady Sundevils, the No. 2 seed, in three of four quarters to post a 63-51 win in the New Mexico Class 4A state title game inside the famed Pit in Albuquerque.

“We’re expected to be in this game year-in and year-out,” Gallup coach Todd McBroom said. “It was fun and exciting to go win it, so we’re very happy.”

Gallup junior Jordan Joe said winning a state title is something they’ve longed for and she’s just happy to be a part of the longstanding tradition.

“I feel really good ’cuz my auntie used to play and she won a state (title), so my whole goal is to win state, too,” she said. “It feels great.” 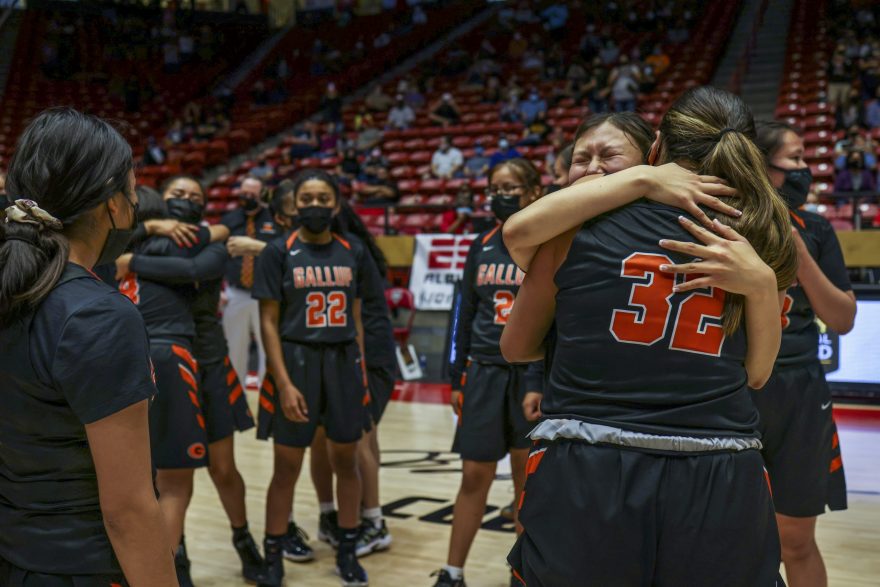 Navajo Times | Sharon Chischilly
The Gallup Lady Bengals celebrate after winning the New Mexico Class 4A state title at the Pit in Albuquerque on Saturday.

Lady Bengal post Hailey Long acknowledged the fan support they received for spurring them on, as the Bengals got off to a great start, leading 10-0 in the first four minutes of the contest.

“This is an amazing feeling, especially with the Gallup community coming here,” she said. “It felt good and we knew that we couldn’t do this for ourselves, we did it for our people at Gallup.”

Espanola Valley coach Sam Estrada said there were a combination of things that didn’t go well with his team as the Bengals exploited the inside presence of both Long and Joe.

“They had shooters, they had scorers and they had two big girls that we had a little trouble with,” the Española Valley coach said. “They’re not just big, (but) they can play. And when you surround that with shooters then you have a great team.”

Long led the Bengals with 14 points and five rebounds while Joe was one rebound shy of a double-double as she finished with 10 points and nine rebounds.

McBroom praised the play of his two post players as they helped Gallup defeat Albuquerque Highland and top-seeded Portales in the first two rounds of the state tournament. 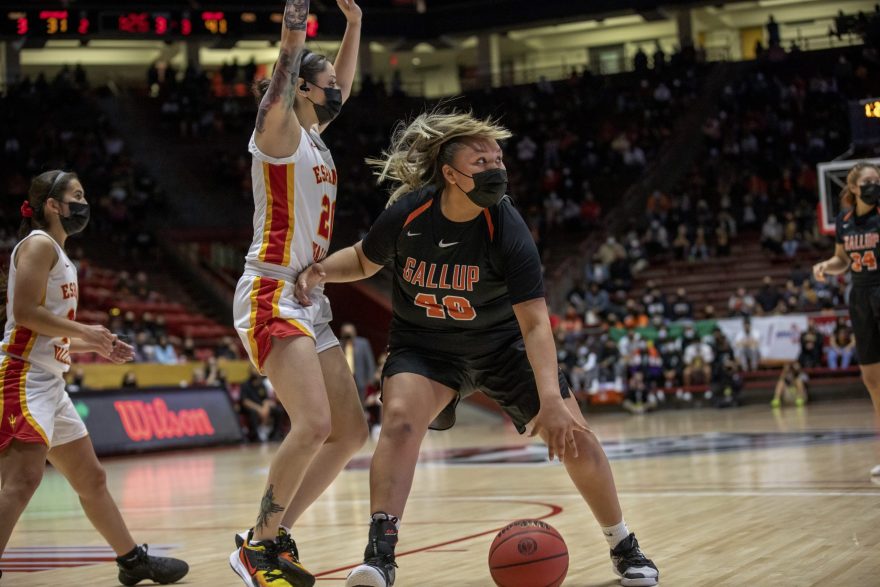 In the two earlier games, Portales and Highland had towered over both Long and Joe, but McBroom said they held their own.

“In some games they might have been undersized … but they still took it to them,” he said. “They’ve had a great week and they’re two of the best in the state.”

In Saturday’s championship game, Gallup also had juniors Michaela McCurtain and Trinity Juan in double figures as they chipped in 13 and 11 points, respectively.

In that early surge, the Bengals got a pair of threes from McCurtain and Juan while Española Valley missed five shots.

A stunned Española Valley squad finally got going when Destiny Valdez nailed a trey with 4:34 left. Another trey from Jordan Torres got them within 15-11 but Gallup scored five straight.

Española added a free throw to end the first and in the second they got the Gallup fans a bit antsy as a trey by Valdez cut the Bengals’ lead down to 24-21 with just under five minutes left.

That was as close as the Sundevils would get as Gallup closed out the half on a 13-2 run behind six points from Long for a 37-23 cushion.

Estrada said his team struggled to find any rhythm as Gallup forced his team to start their offensive sets from beyond the three-point line.

“We didn’t shoot well, but they played good defense on us,” the Española coach said. “The better teams can get out on you, and they can get on your shooters and that’s what happened today.”

In the one quarter that they won, Española Valley outscored the Bengals by a 13 to 6 margin with senior Anita Deaguero nailing two late treys to bring her team within 43-36 going into the fourth.

McBroom said towards the end of the third they got “a bit unorganized” but he expected that.

“I told the girls at halftime (that) they’re going to make a run,” he said. “It’s just how it works and we got to make sure we weathered it.”

The Gallup team did, as they got going again, opening the fourth with a 9-0 run as they quelled any hopes of a Sundevil comeback while leading 52-36.

Estrada said his team followed the game plan of cutting the deficit to under double digits, but when they got it down Gallup started to hit their shots.

“They might have been a little cold for a few minutes when we made that little run to seven, but they started hitting shots again,” he said. “As long as they continued to hit shots we were going to struggle to make up that deficit.”

Deaguero, who led Española Valley with a game-best 18 points, said they’ve come back from bigger deficits but they were not prepared for Gallup’s strong play.

“We just weren’t ready for the intensity they brought,” the senior guard said. “We just knew that we had to match it.”

With the Bengals shooting at a 7-of-15 clip from the three-point line, Deaguero said they had to pop out on the Gallup shooters. And when they did it left the interior open as the Bengals scored 34 points in the paint.

“We were hoping that they would start missing,” Estrada said.

Gallup finished the season at 14-1 overall as they will graduate three seniors – Esther Cowboy, Kennedy Smiley and Savannah Watson – and return 11 lettermen.

“We’re gonna take a few weeks and celebrate,” McBroom said, while adding that the expectations are going to be high to repeat. “Hopefully, we get to do summer basketball and get back to work and start working for another one.”