Jordan Hanley had plenty of suitors seeking her talents.

She also had the option of giving up basketball and concentrate on her studies.

But the former Gallup Lady Bengal opted to continue playing basketball as she recently signed with Scottsdale Community College.

“I had other colleges interested in me but I felt more comfortable going there,” Hanley said of her selection. “My mom went there and I kind of know Phoenix so it was a no brainer. 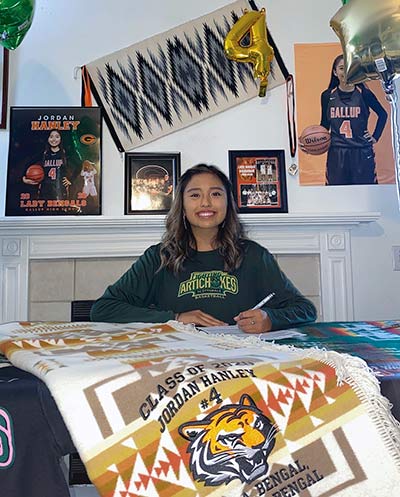 “I know the coaches and I know the campus very well,” she added. “I wanted to be in a place where I was more comfortable to where I can further my education. I’m just happy to have this opportunity.”

While at SCC, Jordan said she’s going to be pursuing a degree in business at the two-year college, as she aspires to become a marketing manager.

And while she was ecstatic her eldest daughter signed with her alma mater, Hanley’s mother, Natalie, said there were some moments that she thought Jordan was done playing.

“She kind of didn’t want to play any more but I know that Scottsdale Community College has been reaching out to her,” Natalie said.

“Tasha really talked to her and she convinced her to give it a shot,” Natalie said of her daughter playing collegiately. “And when she signed that was a proud moment for me because she didn’t give up on what she had worked on for her whole life.”

As a former collegiate player, playing under Medder, Natalie said she went out of her way to get her daughter exposed.

“From a young age she’s played a ton of basketball,” she said. “We traveled all over the United States for her to play.”

Part of her excursions include playing in some top-notch national tournaments in places like Atlanta, Dallas and Indianapolis while playing under the New Mexico Elite and New Mexico Clippers, a pair of traveling teams based out of Albuquerque.

“It’s really different out there,” Jordan said. “It’s more different than the tournaments that we have out here. They have a lot of teams playing and there’s more talent out there.”

And while it was tough at first, she felt that playing in those national tournaments helped foster her growth as a basketball player.

“The talent level is amazing but over the years I got more comfortable playing in those tournaments,” she said. “It helped me challenge myself because those girls can play.”

Natalie concurred while adding that her daughter matured by leaps and bounds.

“It made her a lot tougher, mentally and physically,” she said. “It made her work harder to get to where she’s at.”

To help get her name out there, Natalie said her daughter worked closely with Truth-Spin, a firm that has helped many New Mexico and Arizona athletes earn collegiate scholarships in soccer, basketball, football, softball, cross-country and rodeo.

“They really helped her in recruiting process,” Natalie said of Truth-Spin, a company that was started by Eric and Felicia (Guilford) Taylor.

“Coach Taylor was Jordan’s eighth and ninth grade soccer coach,” Natalie said. “He’s been there ever since and he’s never given up on her.”

And while she got offers from as far as Minnesota, Natalie said she’s happy that her daughter chose SCC.

“I know she had other options but I think going to Scottsdale is kind of a family thing,” she said. “I played under coach Medder and I played one year with Tasha so I’m very comfortable with them.

“I know that they will take good care of her and I’m just really proud of her continuing her education with a basketball scholarship,” she added. “Her goal was to have her education paid for while also playing sport that she loves.”