A lucrative Cowboy Christmas run was what Erich Rogers needed.

Prior to last weekend’s Fourth of July holiday, Rogers held the No. 20 spot in the PRCA team roping (heading) standings.

But over the course of seven days, the Round Rock, Arizona, cowboy moved up 10 spots thanks to the $17,143 he won with heeling partner Paden Bray, who moved up 12 spots to No. 8 in the world.

“We had an awesome week,” Rogers said on Monday of the condensed Cowboy Christmas run that had fewer rodeos this year due to the COVID-19 pandemic. “There is no words to explain the week that we had. It was just a great week.”

And while some cowboys had to battle the elements in places like Mobridge, South Dakota, Rogers said they were fortunate enough to draw their steers on days that it didn’t rain.

“We avoided all the mud,” he said. “That was a big factor to our deal but our horsepower was phenomenal.”

In addition to competing their runs under agreeable weather, Rogers said they drew some impeccable steers.

“We just used all of the good steers we got,” he said. 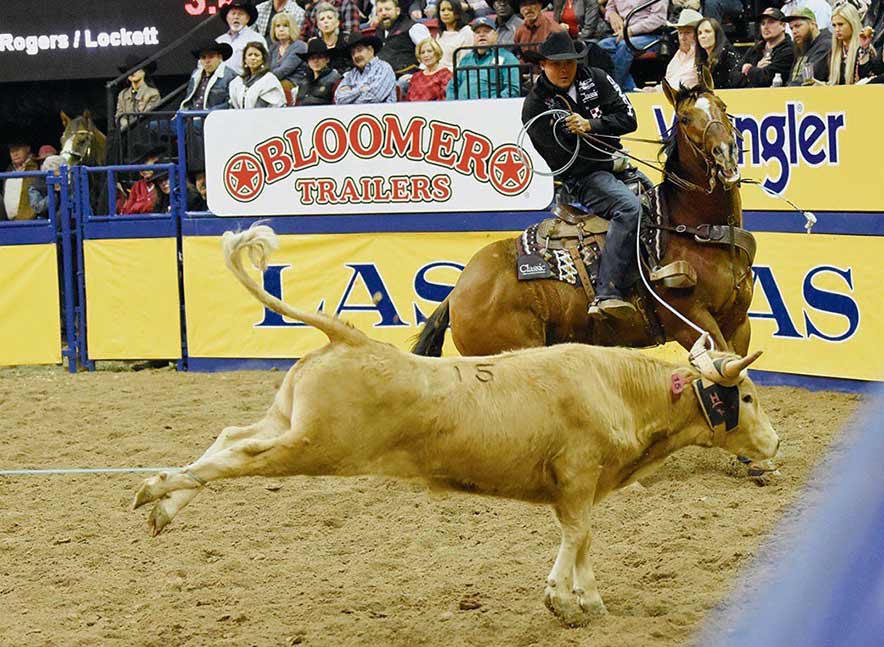 File photo
Erich Rogers makes a clean catch at last year’s Wrangler National Finals Rodeo in this file photo. Rogers won $17,143 with heeling partner Paden Bray at four pro rodeos last week during the Fourth of July run to move up to No. 10 in the world standings.

The pair started their Fourth of July run at the World’s Oldest Rodeo in Prescott, Arizona, as they earned two checks, totaling $4,043.

In the opening round they turned in a 5.6 run, which put them in a two-way tie for third with fellow Diné cowboy Derrick Begay and White Mountain Apache cowboy Ty Romo.

In the average race, they finished in a two-tie for third with a 12.2 aggregate.

“It sure dang helped,” said Rogers when asked if the two runs in the Arizona desert got things rolling for them.

“In Prescott you have to come out in the same box and you have to score a little bit and go catch,” he said. “That is what we did and that was a good way to start the week.”

Following their performance, the pair hit all of the rodeos up north and of those rodeos they collected their biggest payday at the Cody Stampede in Wyoming.

“That run was awesome,” Rogers said. “We drew a really good steer and we just went after him as fast as we can. We made a hellacious run on a good steer.”

Their winning exploits didn’t stop there as they earned checks at two other rodeos. They won $3,154 at the Mandan Rodeo Days in North Dakota and $1,275 in Mobridge at the Sitting Bull Stampede.

With the success they had, Rogers is looking to earn his 10th qualification for the Wrangler National Finals Rodeo, which is scheduled in early December at the famous Thomas & Mack Center in Las Vegas, Nevada.

“I feel real good about what we did. It kind of lifts a weight off our shoulders,” he said. “It gives us a little breathing room knowing that we had such a good week but it’s not over yet.”

With the regular season ending on Sept. 30, Rogers said there are still plenty of pro rodeos to be held despite the season being truncated due to the pandemic.

“I like to thank the committees for the rodeos that are still happening,” he said. “Having these rodeos gives us a chance to keep going and keep rodeoing.”

Rogers said it was sad to see the annual pro rodeo in Window Rock canceled due to the high number of positive cases that hit the reservation.

“It was a bummer when we found out that Window Rock got canceled,” he said. “It was a rodeo that I look forward to. It’s a chance for me to come home, especially with the big fan base we have on the rez.

“Everybody loves the sport of rodeo and I wished we could have come back but I understand we had so many cases of COVID-19 cases on the rez,” he said. “It was a bummer but everybody’s health and safety is important.”

As one of the most travelled competitors in the PRCA circuit, Rogers estimates that he’s going to miss between 50 to 60 rodeos this year as some of the more lucrative rodeos canceled their event this year as the coronavirus has wreaked havoc on the rodeo season.

Nonetheless, he’s added other pro rodeos onto his schedule that he normally wouldn’t go to.

“Before this year I hadn’t gone to any of the North Dakota rodeos,” Rogers said. “They had four rodeos up there and I went to all of them. It’s been kind of crazy to see new territory on this road trip.”

With rodeo taking a backseat for much of the spring months, Rogers said it’s given him some time to reflect on how much he’s missed it.

“It feels good to be competing again,” he said. “Sometimes we take things for granted but I’m glad to be on the road and seeing all of my buddies.”