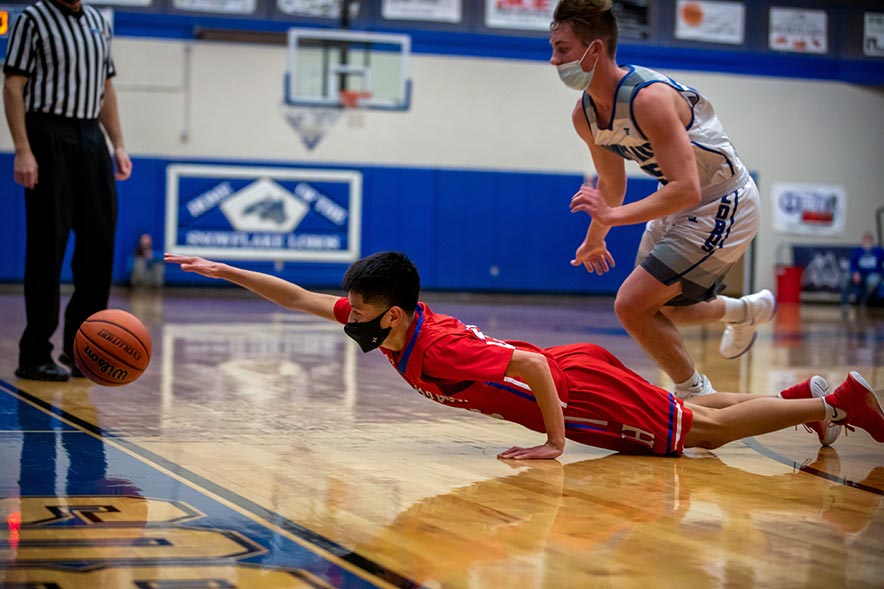 A few things are working against the Holbrook boys and girls basketball teams.

And while most squads have had a smooth transition since the start of the delayed winter sports season two weeks ago, the Roadrunners are starting to get their feet under them.

Both squads have had two games canceled due to COVID-19 protocols, Holbrook AD Greg Perkins said.

Perkins, who also serves as the girls’ basketball coach, said there are no positive cases on either squad at this time, but when there is exposure outside of the team they are following the rules.

“We have three levels of safety measures in place,” he said. “We want to make sure we’re safe as we can be.”

Because of the protocols in place, Perkins said they had one of their games canceled earlier this week. With that game being scratched, the longtime Holbrook coach was hoping to get a few days of practice, but a string of snowstorms prevented that.

“Some of our kids come from the reservation and for safety concerns we didn’t want them to come in,” he said.

And while these obstacles have been a hindrance, Perkins said both teams will overcome this.

Nonetheless, the lack of practice and game time were quite noticeable for both squads as they dropped their 3A East Region opener to the Snowflake Lobos on Thursday night.

Both teams dug themselves in an early hole as the girls’ team dropped a 50-39 game while the boys came up short 56-50.

“Our team can be pretty good but right now we’re trying to get into shape,” Holbrook boys coach Delmar Johnson said. “We have done a lot. We had to shut down because, you know, with the things going on. We didn’t practice for a while. We were out for about 10 days and that hurts when you have a layoff.”

Despite those obstacles, Johnson said the kids are happy to be playing basketball. 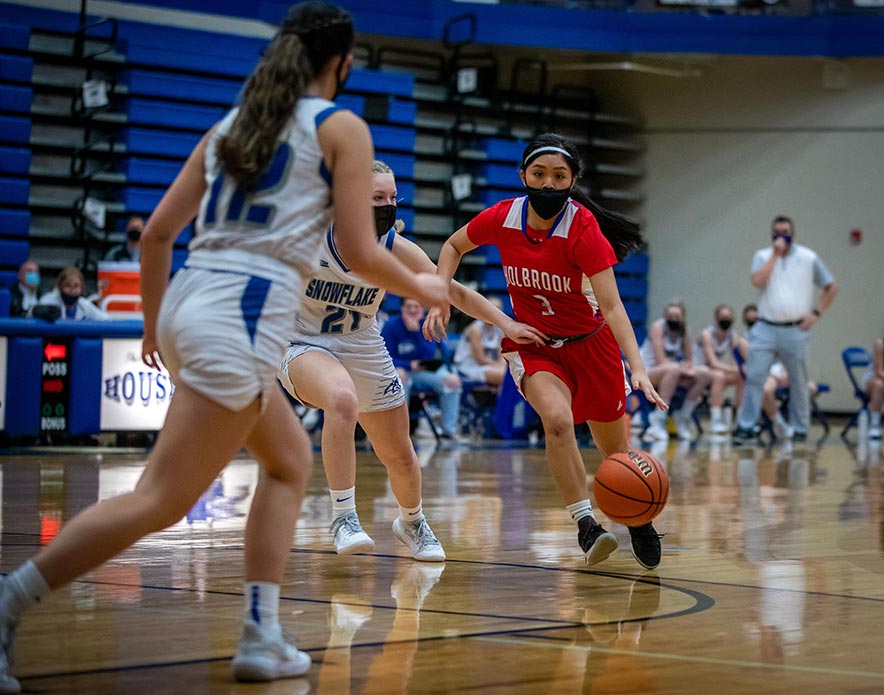 “We’re just thankful that we have a season even if we only play 10 games or less,” he said. “We’re just taking advantage of that … because a lot of the schools on the reservation are not playing. We’re in the position to where we have to be thankful that we’re even playing any game.

“I’m just happy that we get a chance to play,” he added. “I just want to see what we can do as a team once we get a couple more players coming back after sitting out.”

After surrendering a 14-point deficit in the opening quarter, Johnson’s team cut Snowflake’s lead down to 29-18 at the break.

The Lobos extended that cushion to a dozen points midway through the third, but Holbrook used a 12-4 quarter-ending run to close that gap to 39-35 behind some crisp shooting from Anthony Nelson as the senior guard sank 7 of his team-best 23 points.

Holbrook (1-1) momentarily took a 45-41 lead when Nelson hit his fourth trey with 5:12 left in the game. As a team Holbrook made nine threes.

The momentum, however, shifted in Snowflake’s favor as they used their size to finish out the game scoring 15 of the last 20 points for the six-point win.

“The one thing we have to do is we need to fight every single game, especially against a good team like Snowflake,” Johnson said. “We’re going to be live and die by the threes, but we got to get better at rebounding and playing defense.

“We scrapped and clawed our way back into the game,” he said. “We had a chance to win the game, but we came up short. I think we just got tired because of the 12, 13 (deficit) but other than that I’m proud of my team.”

When asked about their run in between the last two quarters, Nelson said they played much harder.

“We didn’t back down,” he said. “We just found the open man and we made some good shots. We did a lot of things positive to get back into the game.”

After Nelson’s 23, Holbrook had two other players in double figures with sophomores Quentin Thomas and Brandon Tapaha adding 11 and 10 points, respectively.

In the girls contest, the Lady Roadrunners kept pace with Snowflake in the early going as the contest was knotted at 7-all.

The Lady Lobos, however, used a 13-0 run to open up a 20-7 cushion. From that point on, Holbrook had to play catch up as they got as close as three points late in the third quarter.

It was still a five-point contest (40-35) with five minutes left but Snowflake capped the game on a 10-2 run.

“This is a disappointing loss tonight because I felt like we could have won,” said Perkins, whose team dropped to 0-2. “But Snowflake is very good. We knew what we had to do to win the game and we didn’t quite do as well as we should have.”

The Roadrunners were hurt by fouls, committing 22 during the game as Snowflake made 13-of-25 free throws.

“I think that if we were able to execute our plays more and not fouling as much we could have controlled the tempo of the game,” said Holbrook senior Matehya Aberle, who finished with a team-best 14 points.

“We didn’t do a good job of watching their cutters down low inside,” she said. “We could have controlled the board better too.”

Nonetheless, Aberle said they’re going to get better as they are destined to be a state contender.

“We’re hungry for it,” she said. “We gotta come to practice hungry for wanting that gold ball. It’s going to come down to mental toughness and execution on our offense and defense.”

Both teams return to action on Saturday with the girls hosting Flagstaff while the boys will be on the road at Flagstaff. Tipoff is scheduled for 5 p.m.