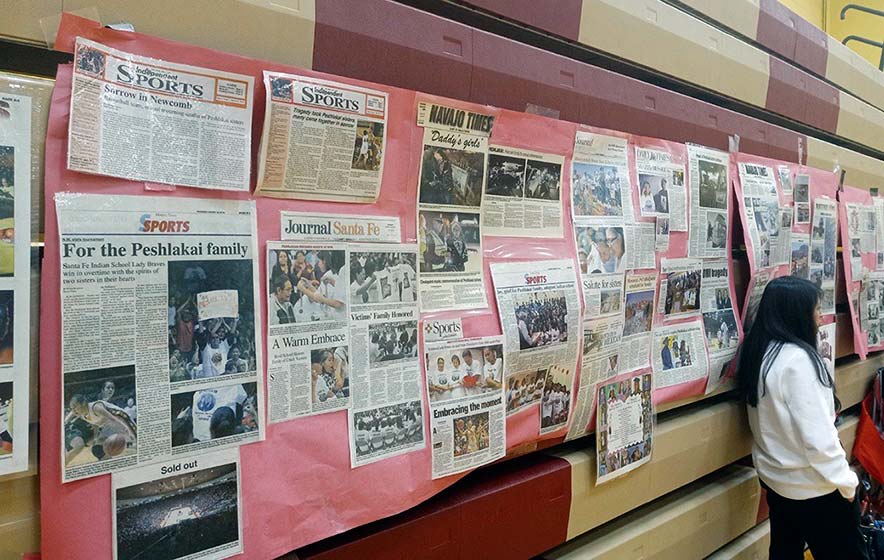 A collage of newspaper clippings donned the north end of the Rehoboth Christian High gymnasium.

For three days it served as a reminder for the pain and anguish the Peshlakai family has endured after losing two beloved sisters, DeShauna, 17, and Del Lynn, 19, in March 2010 to a drunk driver.

On that March night, the two teenage girls were killed in the back seat of their parents’ car as they were making their way home from a state basketball playoff game in Santa Fe.

The two sisters were traveling with their parents, Dave and Darlene Peshlakai, and while they were waiting at a stoplight on Cerrillos Road they were rear-ended by James Ruiz, who was later sentenced to 40 years in prison for his role in the deaths of the two sisters.

The collage was looked over by many during the 9th Annual Peshlakai Angels Memorial “Don’t Drink and Drive” basketball tournament that was held over the weekend.

“We put those articles up for people to see the angry and anguish we experienced, so that they can make better choices,” Darlene said. “You know, we’re not going to stop you from drinking, but we want you to make good choices.

“If you want to drink, plan ahead,” she added. “There are a lot of ways that you can prevent that – get somebody to drive you and if you live in the city get a taxi.”

The annual tournament made its return after a two-year hiatus due to the global pandemic. For its first eight years, the tournament was held at Newcomb High, the school the Peshlakai girls attended.

The family moved the tournament to Rehoboth as a way to give back since the private Christian school went out of their way to accommodate the family during the girls’ funeral services 12 years ago.

Their funeral was initially supposed to take place at the church on the school campus, but the number of people who came to pay their respects outnumbered the capacity limits.

The school, Darlene said, got the ball rolling to move the services to the high school gymnasium to allow more mourners to attend the funeral.

“They fixed everything, and they pulled out the bleachers,” she said. “They had good hearts, and we’re very appreciative of that. Not too many people will do that and open their doors like they did. They took over and fixed it for us.”

In hindsight, Darlene said having her daughters’ funeral services inside the gym was a perfect fit.

“That was their life,” she said. “They’re passion was inside the gym, playing basketball and volleyball.”

Dave said the family had been in talks with Rehoboth of bringing the tournament to the school in the spring of 2020, but the pandemic halted those plans.

“We wanted to have it here two years ago but because of COVID we couldn’t,” he said. “We’re thanking them in return for opening up their gym for us at that time.”

Rehoboth High Principal Dan Meester said the tournament was a huge success, adding that the school and the Peshlakai family had similar interest in hosting the tournament.

“What they’re trying to accomplish with this tournament is keeping people safe and making awareness of drunk driving,” he said. “That fits right in line with the mission of what Rehoboth is all about, so we thought it would be a great fit.

“Unfortunately, the pandemic canceled it for a couple of years,” he said. “So we were excited to be able to have it here and we welcomed them this year. And it’s been a great few days and so we really enjoyed it.”

As the tournament host, Rehoboth collected all money raised at the gates and concession stands.

Meester said part of the $200 entry fee that was collected from each team paid for the referees who officiated the tournament.

“All of the proceeds from the family goes to causes that support drunk driving awareness efforts,” Meester said. “And the gate and the concession will help with Rehoboth athletics here.

“And that’s just a nice win all the way around, but Darlene wanted to make sure that people know this is not a moneymaker for the family,” he said. “This is entirely a massive charitable effort by them to benefit schools in the area.

“And, of course, to raise awareness of the importance of not driving drunk and staying safe on the roads,” he said.

Meester said the money raised will help to support some of the travel expenses incurred with tournament games.

“Some of our teams have to stay overnight, whether that’s for state or for a season tournament,” he said.

Depending on how much is raised, Meester said there is an opportunity for the school to purchase some equipment they might use for basketball, such as a shoot-away machine.

“It’ll be something that will benefit our students in the long run,” he said. “Obviously, we want to have a maximum effect on as many athletes as possible.”

Due to the three-day time frame, Darlene said they had to condense the tournament to a 32-men and 16-women team bracket.

“We normally have 55 to 60 teams, so the brackets filled up really fast,” she said.

LA Ballerz was one of those teams that were on standby before they made the tournament field.

“They gave us a call on Thursday about 3 o’clock, so when we got the OK we were excited to play,” LA Ballerz basketball player Orlando Kee said.

Kee said the team is from the Western Agency with most members coming from the Leupp, Arizona, area.

In the double-elimination tournament, the LA Ballerz defeated Puma by 90-72 in the finals as the game got called with just under four minutes to play.

In the women’s title game, Run-N-Gun avenged an earlier loss to The Gizzettes, coming away with a 60-47 win in the finals.

“It’s very gratifying, especially coming from the loser’s bracket,” Run-N-Gunn player Valara James said. “You know, we put our hearts out there and I’m just proud that we came away with the win.”

After losing to The Gizzettes, the tournament champions posted four straight wins to claim the title.

“It was a total team effort and, you know, the girls were tired, but we just pushed through,” James said. “Like I said, I’m glad that we came out with the win. I’m proud of them because they stepped it up in this game.”