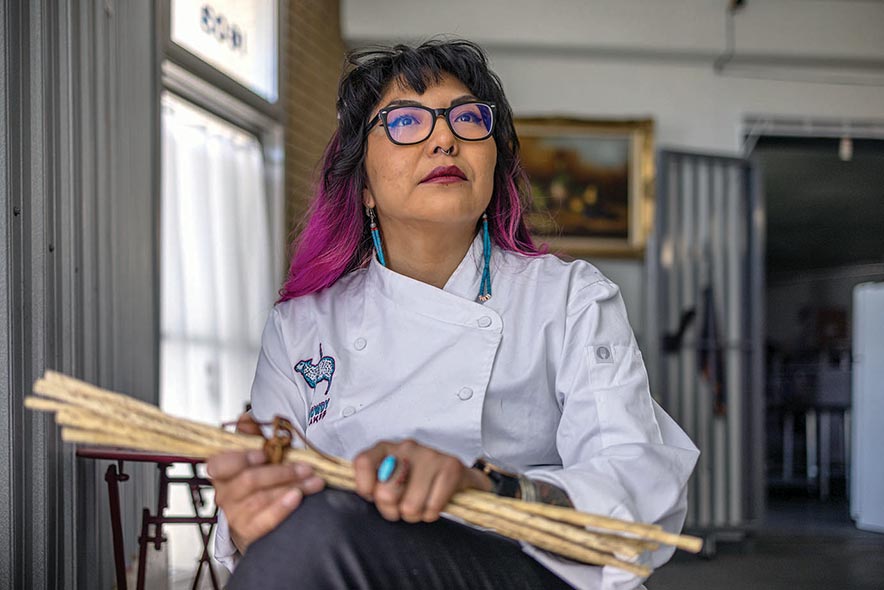 Special to the Times | Sharon Chischilly
Culinary artist and baker Elizabeth McKenzie, 34, Diné, holds up her ádístsíín as she poses for a portrait. McKenzie is the owner of Howdy Cakes in Albuquerque.

Elizabeth McKenzie, 34, owner of Howdy Cakes in Albuquerque, started a personal project a couple years ago to provide residents of Navajoland Nursing Home in Chinle with care packages around the Christmas and Easter holidays.

They call their project, ”Hozho2O,” which is supposed to be like the chemical formula of water, H2O.

They have organized this project on their own and are not a defined organization. This project began around the time of the Gold King mine spill in 2015.

The mine spill was an environmental disaster that occurred near Silverton, Colorado, when U.S. Environmental Protection Agency personnel and workers with the Environmental Restoration LLC caused toxic water waste to spill into the Animas River.

This spill reached the San Juan River which runs next to Shiprock. The spill affected irrigation and the area’s water supply.

“I couldn’t find any sort of relief effort for it (Gold King mine spill) so some friends helped me wrangle up water to take out to Shiprock Chapter, so people didn’t have to buy water since they needed drinking water,” McKenzie said.

“From that it expanded into going up to Standing Rock during that season and then it also turned into, kind of what I’m trying to salvage it, is bringing items out for the elderly at Navajoland Nursing Home,” she said.

They have done this project for the last few Christmases and Easters. The main motivation is to let the people know that they are thought of and loved.

McKenzie remembers visiting their great-grandfather at the nursing home in Gallup when they were younger.

“I always cherish that memory and it just really makes me so sad to realize that a lot of people just dump their elders there,” McKenzie said.

“A lot of them don’t get visitors and they just kind of sit and look out the window and I just wonder if they’re just waiting like one day for their family to come walking up,” they said, “and it breaks my heart.”

Elders are the culture keepers, and they teach us how to be, they said.

This project is important to McKenzie because it gives her a chance to reach out to the grandmas and grandpas that do not have anyone.

The first time these care packages were put together was for a Christmas holiday, McKenzie recalls. They said they got to talk a few of the elders, and it was emotional because a lot of people knew who their grandpa was.

“They (the elders) always ask, ‘Who are you?’ and ‘Where’s your family from?’” McKenzie said.

“My grandpa, who raised me, is Dr. Taylor McKenzie,” she said, “who was the first Navajo doctor and he’s an orthopedic surgeon and when they find that out, a lot of them are like, ‘Oh, Dr. McKenzie operated on my hip, he operated on my whatever.’”

The elders also will talk about going to see Dr. McKenzie while he was running for office and during these times McKenzie tagged along with her grandpa.

She said to know that she was with these elders at some point in time before formally meeting them is awesome and she enjoys having these conversations with them.

Throughout the last few years of putting these care packages together, the project has gained a lot of support within Albuquerque.

“It’s really awesome because there’s a lot of community support here in Albuquerque, a lot of people want to help but just don’t know how,” McKenzie said. “So, it’s kind of like letting them know how and really thanking for contributing and keeping the community strong.”

McKenzie reached out for help on their business’s Instagram account, asking for donations in the form of baskets, playing cards, slippers, cool combs, soft socks, sugar-free candy, large-print crosswords, and handmade cards with positive and loving messages. A deadline of April 13 was set.

As of last week, she was preparing packages for 64 residents.

“I would more so encourage people to maybe mail cards to the nursing home,” McKenzie said.

Any further information about McKenzie’s business can be found on Instagram @howdycakesabq and on their website www.howdycakesabq.com