‘It is not one-and-done’: Gallup still optimistic after tough loss to PV 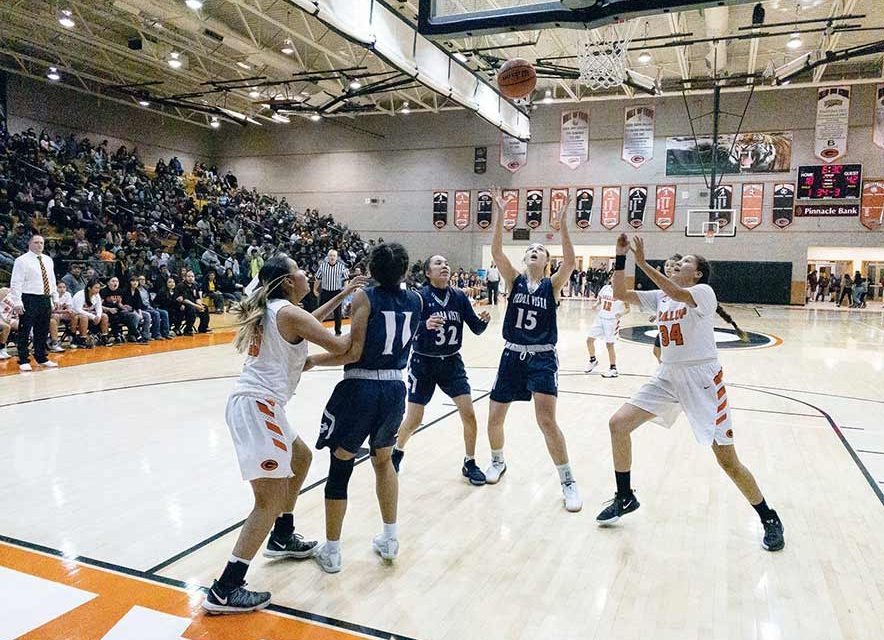 Navajo Times | Donovan Quintero
Gallup Lady Bengal Jordon Joe (34) and Piedra Vista Lady Panther Bailey Rasmussen (15) look at the ball as it starts to come back down on Saturday night during the 45th Annual John Lomasney Basketball Tournament in Gallup.

It was an early season match-up of top teams in the Gallup John Lomasney Invitational Saturday night, but after a tough 65-40 loss to Piedra Vista, the Gallup girls know some things that need to improve.

“We were very poor on the defensive end,” Gallup head coach Todd McBroom said following the loss. “And we didn’t rebound very well.”

McBroom said the Lady Panthers are the top-ranked team in the state for a reason. Still, with this being only the third game of the year for Gallup, he said there is still plenty of time.

“It is not one-and-done yet,” he said. “It is not March, and there’s a very good chance that we will meet them again down the road.”

Piedra Vista dominated from the start, taking a 17-6 lead after one, and leading 38-18 at the half.

The Lady Panthers continued to add to their lead in the third, and then were briefly able to get a running clock when they pushed their lead to 35 points early in the fourth.

Gallup closed out the fourth strong, scoring 14 of the last 18 points, but it was not enough to get them within striking distance.

“This is the best game we have played all year,” Piedra Vista head coach Joe Reed said following the dominant win. “Our defensive energy was huge tonight, and we did not give them a lot of 3s and were able to keep this crowd out of the game.”

He said that the Gallup Invite was big for PV, giving them good experience of playing in front of a loud fan base as they prepare for games later in the season, and the possibility of playing in The Pit at state.

“Any time you come to Gallup and play against Gallup it is going to help you,” he said. “This crowd is great. Coach McBroom is lucky to be able to coach in front of this kind of crowd every night. For us, it gets us ready to play in the state tournament.”

In the third-place game, Tohatchi pulled away with Krystal Benally scoring all 12 of her points in the second half to lead Tohatchi to the win.

Benally took over in the third however, as Tohatchi outscored Alamogordo 13-6 and in the fourth the Lady Cougars had a 16-7 advantage to hold on to the win.

Benally scored 12 points to lead the way for Tohatchi, with Cameron Tsosie adding 11 and Gabrielle Thomas put in 10.

In the consolation bracket championship, Navajo Prep put things away early with a dominant, 63-33 win.

For Silver, Katelyn Limardo scored 16 and Alissa Jameson put in 10.

In the seventh-place game Miyamura got a big third quarter from Malia Ukestine to help overcome a big night by Shiprock’s Evette Lansing.

Lansing scored 26 points in the game, but it was not enough, as the Lady Patriots got 18 from Ukestine and 13 from Katianna Toledo and pulled away in the second half for the win.