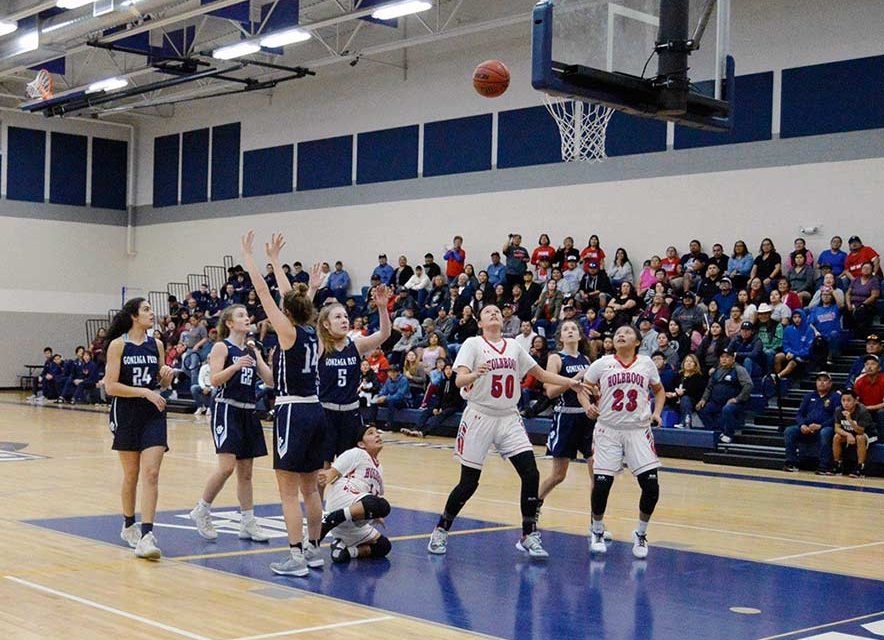 Special to the Times | Candace Begody
Holbrook’s Talynn Spencer gets knocked to the floor and watches the two-point shot fall during the championship game of the 2020 Chandler Prep New Years Classic basketball tournament in Gilbert, Ariz. over the weekend.

For a minute there, it looked like the Lady Roadrunners would become the 2020 Chandler Prep New Years Classic champions.

It was only the first quarter, but it seemed like a good sign when they opened the game with a three-point shot, followed by an easy layup.

Even the crowd, the majority of which were from Holbrook, approved as many rose to their feet shouting and cheering.

Holbrook stayed close to Washington state’s Gonzaga Prep throughout most of the game. At the end of the first half, Gonzaga Prep led by only a few points, 22-17, and by the third quarter, both teams were trading baskets, neither team with a comfortable lead.

But Gonzaga Prep turned up the heat in the final quarter nailing a few key shots to pull away from the Roadrunners by 10 points. Despite Holbrook’s efforts, the Roadrunners simply could not come back and accepted the runner-up honors with a final score of 51-41.

“They were a team that made you pay for mistakes,” Holbrook coach Greg Perkins said of Gonzaga Prep. “We hung tough, but we made a couple of mistakes and they were able to pull away. We fouled them and they kept making their free throws. We had our chances and if we had a couple less turnovers, we had a chance to upset them.”

Despite their loss in the championship game, Perkins said the tournament allowed the team to find themselves.

“We struggled and were sluggish before Christmas break,” said Perkins. “We couldn’t sustain anything, but we found ourselves at this tournament. We were able to sustain the good parts of the game. Defensively, we found out what we are capable of.”

The tournament also gave the team the confidence it needs for region play, especially after losing the state title to Page at last year’s state tournament.

“We will be in the state tourney again,” Perkins said. “We have been there 11 years in a row, and it has become our primary goal to return every year.”

As of press time, the Holbrook girls were No. 2 in the 3A East Region with a conference record of 2-4 and an overall record of 11-5.

Despite a third-place finish, Window Rock came the closest to beating the eventual tournament champions – Gonzaga Prep – as they lost by a mere two points, 44-42.

The Window Rock Lady Scouts put away Casteel, 51-45, in the first round, and snuck past Alchesay in the second round, 52-41. Their only loss came at the hands of Gonzaga Prep in the semifinals. Window Rock then beat American Leadership Academy-Gilbert North, 46-40, for the third-place finish.

“We knew ahead of time how tough they were going to be,” said coach Sharon Todacheenie of the Gonzaga Prep game. “The height and shooting was there, and the strength of inside players was there. We knew what we were up against, but our girls knew how to play against that team and players.
“We knew we could win the game and we almost did,” she said. “The only thing that troubled me was we never got on the free-throw line the whole game.”
Window Rock did not get to the charity line at all during this game.
“There was a lot of roughness, but the officials didn’t call it,” she added. “But that didn’t stagger us. Even though the outcome was losing by two points, we gave them a good game.”
As to any standouts for the team, Todacheenie said there isn’t one.

“Each one of the players had playing time,” she said. “We have a deep bench and don’t rely on the first five. They all stepped up and finished the game and worked consistently. Even though there are five on floor, there are five that are ready to play that pick up where the starting five left off.”

Window Rock now has an overall record of 13-3 including all the tournament games.

In the Gold Division, the Many Farms Lady Lobos went 3-1 in the tournament and finished in fifth place in their respective division.

In the first round, Many Farms slid past Glendale Prep, 38-34, but fell in the second round to Northwest Christian with a final score of 32-28.

Many Farms faced Red Mesa in the third round and managed to get past them, 32-31.

“We came out nervous,” said Many Farms head coach Tracy Todacheene of their game against Red Mesa. “We didn’t establish our tempo. We were rushing things and that affected our game.

“I am glad they gave us a tough game,” Todacheene continued of Red Mesa. “We really needed something like that.”

Of the overall tournament experience, Todacheene said, “This is a good tournament to come to because you are facing all nationalities. It is more competitive because we are facing taller people and quicker girls. It also shows us what we need to work on and where we need to get better.”

Todacheene said he has a new group this year, with only three seniors on the team.

“You see it when you watch them,” he added of how young the team is. “They’re still working on improving, and I hope by the end of the season, they are ready to peak and to attack the conference and state tournaments.

Last year, Many Farms made it to the state playoffs but was bumped out in the first round.

“That was a big fight,” said head coach Sandy Benally of the Del Oro game.

“One of our starters got hurt, but we gave them a fight.”

Having played against tougher competition, Benally said, “This tournament is going to help us. Our kids need to toughen up. A lot of these schools are very physical and when we come here, some of our players get thrown around, they get scared and start backing off.

“This tournament allowed them to get tougher,” she said. “Just learning to play against height too and being in control. Getting together and playing stronger together.”

St. Michael finished the tournament with a 1-3 record, beating Yuma Catholic in the first round, 43-31, before losing to Paradise Honors, Valley Lutheran and Mountain View.

“We were put in a tough bracket, which was good because we wanted to play bigger schools,” said St. Michael head coach Carl Adams. “Against Yuma Catholic, we played against girls that were six feet tall. That was a good win for us.”

Against Paradise Honors, Adams said, “They were pretty tough, physical and tall. We learned how to pressure, and we figured out what we need to do when it gets tough.”

“We were both tired, we had played a couple games by then and traveled,” Adams said of the Valley Lutheran game. “The previous game took the legs out of us.”

In their final game, Mountain View took the win over St. Michael with a final score of 46-40.

“We didn’t give up and pushed all the way through,” he added.

Monument Valley placed second in the consolation bracket after losing to Leading Edge, 56-49.