A chance to reconnect with a past coach was too good of an opportunity for Hailey Long to pass up. 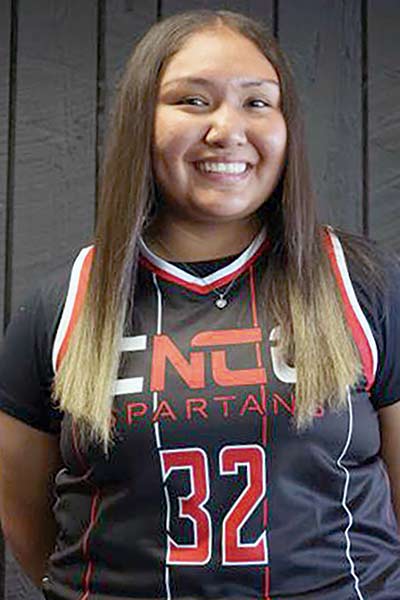 Out of Gallup High School, she had basketball offers from colleges in multiple states, including Arizona and Washington.

She ultimately decided to play for Colorado Northwestern Community College, where she has reunited with head coach Eric Benedick, who said he coached her in club ball from eighth to ninth grade.

Their connection has resulted in immediate impact, for the 5-foot-10 forward was named the Scenic West Athletic Conference player of the week, according to the college’s online site.

“She’s a very talented individual that plays with a very high motor,” Benedick said. “She has a great knack for rebounding. She’s also very skilled off the bounce.”

Through four games (2-2), Long led Colorado Northwestern by averaging 19.3 points and 9.8 rebounds per game and shooting 55.3 percent from the field.

“She’s shown she was underestimated and undervalued coming out of high school,” the coach said.

Long fouled out in the opener, finishing with four points and two rebounds. “Most of them (fouls) were defensive when I was trying to get the board,” she said.

She recovered from that debut to post three consecutive double-doubles in points and rebounds. She led players from both teams in scoring and rebounding during the win over Central Wyoming.

“My team was able to give me the ball quicker and at the right time,” she said. “I had so much energy and intensity and so much tenacity to go at the goal.”
She is able to score from the perimeter and near the basket. “When I’m open on the three, I’ll most likely take the shot,” she said.

If the three-pointer isn’t there, she will drive to the basket to score from the inside or draw a personal foul. She converted nine of 13 free throw attempts against Central Wyoming, topping all players with trips to the charity stripe.

Benedick noted her growth from when he coached her years ago. “She’s a high IQ player,” he said. “She went from somebody who was a little shy to shoot the ball to somebody who knows how to lead offensively.”

As far as ball control, Long learned how to position herself to collect rebounds without fouling opponents.

“Use my body to box them (foes) out. I would try to run to the basket and get in a good position,” she said. “If they were shooting in the paint, I would get closer to the goal.”

The team employs a man defense, so typically she is assigned to defend a bigger player. She is trying to improve her foot speed to stay with the guards when she has to defend them. Her length helps in covering ground, for she said, “I’m able to take bigger steps.”