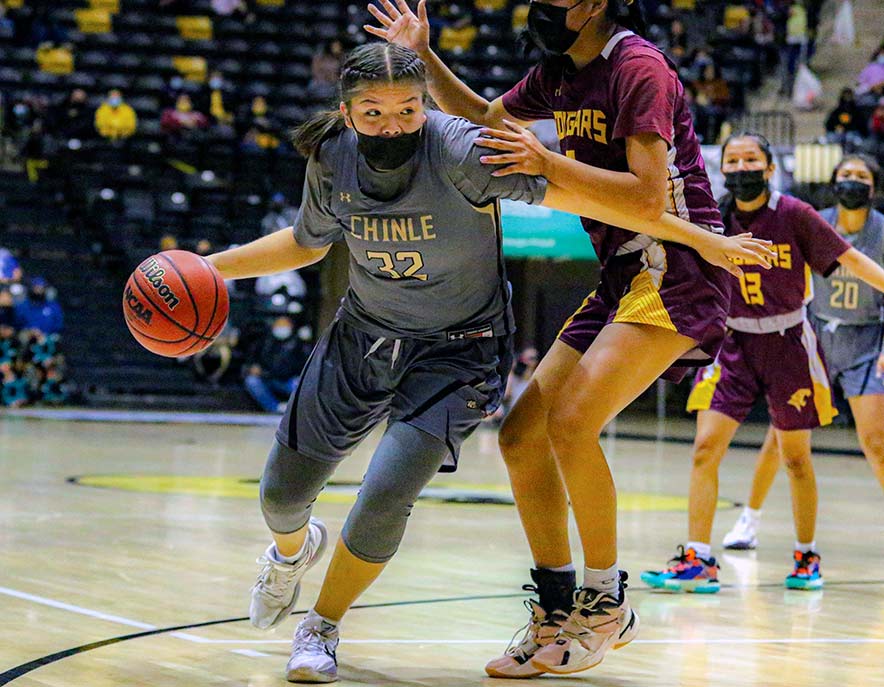 Navajo Times | Cyrus Norcross
Chinle Lady Wildcat Aisha Ashley (32) drives the ball forward as Rock Point Lady Cougar Arianna Begay (10) guards her on Dec. 11 during the championship round of the Choice Wireless Tournament in Chinle. The Wildcats defeated the Cougars, 46-41.

Earlier that evening, Red Mesa faced off against the Hopi Lady Bruins. Red Mesa quickly started making baskets, making it halfway thorough the quarter before Hopi found its rhythm and hurried to catch up, ending the first quarter 17-15 for Red Mesa.

Hopi briefly took the lead in the second period, but Red Mesa stole it back and put more distance between them, with Red Mesa leading 34-26 in the first half.

Red Mesa’s defense was strong, prompting the Bruins to push its limits. In five instances, the Lady Bruins threw the ball across the court to an open player who made a basket. This was an effective tactic for a while before Red Mesa locked down on its defense. Hopi got closer in the third quarter with Red Mesa in the lead 46-41.

In the final period, Hopi made a stunning recovery and quickly caught up to Red Mesa with two baskets and successful free throws from Neveah Lomavaya.

Kaleigh Huma put them one point away from overtaking Red Mesa for the contender’s prize. But in the final minute, Danika Chico made two successful free throw shots and a basket from Alexa Poyer secured their victory with 57-53.

For Hopi, Lucille Polingyumptewa led the team with 22 points, teammates Huma and Katrese Lomayaktewa followed with 11 points each. Hama, Lomayaktewa and Leala Nevayaktewa made one 3-pointer each.

For Red Mesa, Jada Begay finished with 24 points, making six 3-pointers throughout the game. Her teammate Poyer is the only other Red Mesa player to make two 3-pointers.

Red Mesa coach Sandy Benally thanked the Chinle team for having them and the Hopi team for playing. This was the third time they faced the Lady Bruins and he felt like his team has improved since then. He is proud of his team’s determination and their drive to keep pushing.

“Today we did real good,” Benally said. “We’re actually meshing and the only thing we’re hurting with is our rebound.

“But our shooting and moving the ball up is improving, which is good,” he said. “Overall, we’re doing pretty good right now, hopefully we can keep it up for the rest of the year.”

The girls’ championship was held later that evening between Chinle’s Lady Wildcats and Rock Point’s Lady Cougars. Aisha Ashley started the game with the first basket in the opening minute before Shelby Chee answered back with a free throw. Chinle moved quickly, gaining a seven-point lead in the first period.

In the second quarter though, Rock Point started to pick up its game. The team put pressure on the Lady Wildcats, giving itself room to breathe and make baskets.

By the three-minute mark, Chinle was ahead just by one point at 17-16. At the 30-second mark, they tied at 24-24. Finally, the Lady Cougars stole the lead with Danielle Johnson making a basket at the buzzer, ending the first half for Rock point with 26-24.

In the third quarter, they tied at 26-26 before Chinle retook the lead. Playing with more aggression, the Lady Wildcats broke through Rock Point’s defenses and continued pushing forward. After adapting to Chinle’s attack, the Lady Cougars stepped it up as well, chasing closely after the Lady Wildcats, ending the quarter 33-28 still in Chinle’s favor.

In the final period, Chinle fought to maintain the lead, but Rock Point slowly caught up to the team. Arianne Begay bumped the Lady Cougars into the lead briefly at 36-35, but Chinle quickly retaliated as Ashley and Ashlyn Lynch made a basket in the next play. After that, the Lady Wildcats maintained its lead, winning the tournament 46-41.

Arianne Begay, who made 27 points and the team’s only 3-pointer, led Rock Point.

For Chinle Aisha Ashley made 14 points. Her teammate, Shaundiin Yazzie, made three 3-pointers and Lashante Benally made the only other 3-pointer for the team.

Rock Point girls’ coach Arthur Reed said he is happy with his team’s performance. Some of his team members are volleyball players who are still nursing injuries from their recent season but are still determined to play a good basketball season.

Reed knows they’ll have a good season this year. And there are things his team can improve but he is certain that they will overcome it.

“This group is very dedicated, I think they’re focused on what their jobs are,” Reed said. “And the girls making MVP, they deserve it.

“They’ve been working hard and they’re leaders too,” he said.

Chinle coach Francine McCurtain was also happy about her team’s performance, saying they executed all their plays and is proud how they did everything to the best of their abilities.

“Rock Point has tall girls, and we try to get the ball out of their hands,” McCurtain said. “Sometimes we didn’t but I asked for the effort and the boxing out and making sure they hustle out there and they did that so that was really good.”