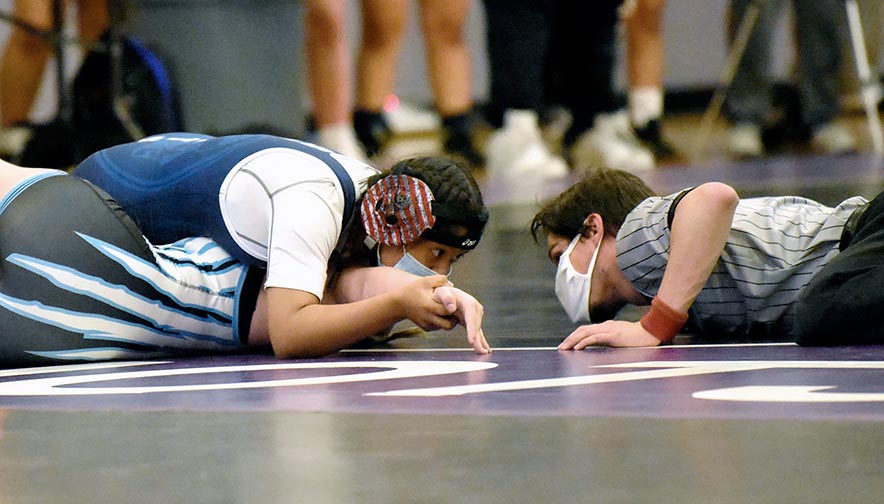 Navajo Times | Donovan Quintero
A Window Rock Lady Scout wrestler eyes the referee as he checks to see if her opponent’s back is on the mat on Friday in Gallup. Window Rock will host a multitude of teams at this week’s Veteran Memorial Invitational in Fort Defiance on Friday and Saturday.

Before taking over the Window Rock wrestling program, Duane Hanley spent a few years coaching at the middle school level.

During his time at Tséhootsooi Middle School, the wrestling program enlisted dozens and dozens of wrestlers, but when they reached the high school level they developed different interests.

“We’d have big numbers in the middle school program but high school wrestling is a whole different animal,” Hanley said. “In a way, it kind of filters the kids who want to continue to wrestle and they’re the ones that are more disciplined to the sport.”

Hanley said most of the middle school wrestlers he coached did other things and some joined the basketball team when they got to high school.

“It’s hard to compete with basketball and basketball is the biggest sports on the rez,” he said.

Heading into this year, the first-year coach wasn’t sure what kind of numbers he would see, especially coming off the canceled 2020 season, shut down due to the pandemic.

In previous years, he said they would have up to nine wrestlers traveling to every competition.

This season, however, their numbers are up as Window Rock has 26 wrestlers on the team with half of them competing at last week’s “Battle for Honor” wrestling dual at Miyamura High School.

The girls’ team saw a significant increase, going from three wrestlers to nine.

“They’re starting to come around,” Hanley said, while noting that he coached Jiiniibah Redhorse at 120 and Meredith Mitchell at 145 at the middle school level.

“They’ve been in the program for a couple years, so they’re my top leaders,” he said.

The Scouts added Ganado transfer Jamaal James (126) to the team.

Hanley said he would like to get all of his wrestlers to state, but realistically he’s looking for his veterans to get qualified.

At the start of the season, the Scouts competed in the round-robin tournament at Winslow High and saw the competition from other sectional teams.

“Getting that preview really helped,” Murray said. “It gave them a chance to see what they have to work on to get past their opponent.”

Afterward, Hanley had a conversation with his assistant coach on the drawbacks of taking a whole season off due to COVID-19.

“You could really tell that we were really behind,” Hanley said. “The schools that had programs during COVID had an edge on us but going into this competition and the one in Kayenta (last week) you could tell the kids are coming back.

“They’re getting that feeling again, and they’re starting to remember what it’s all about,” he added. “A lot of their matches were a lot closer. I feel like they’ll come around. We just need a few more matches.”

The Scouts will get plenty of that when they host the 7th Annual Veteran’s Memorial Invitational on Friday and Saturday.

“It gives the kids exposure,” Hanley said. “It’s a really big deal because the kids get to see the techniques from other wrestlers.”

The VMI will host a multitude of boys’ and girls’ teams from Arizona, New Mexico and Texas for the two-day event.