When Kirtland Central girls’ basketball coach Devon Manning arrived at Bronco Arena this season, he knew he had stumbled upon something special. 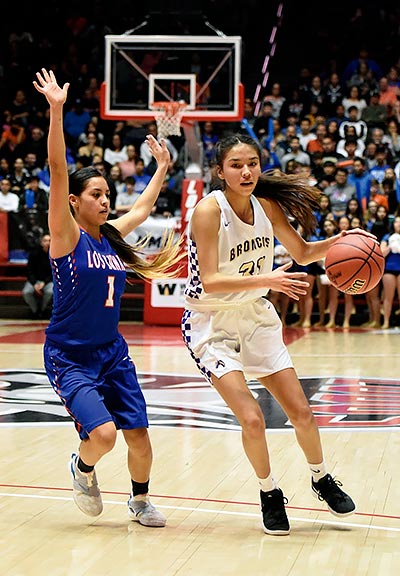 Lady Bronco Tiajhae Nez brings the ball down court during the New Mexico Class 4A state championship game against the Los Lunas Lady Tigers in Albuquerque.

The Lady Broncos had a habit of playing in the state playoffs, but hadn’t reached their potential. Under his guidance, the Lady Broncos became regular-season district champions, district tournament champions, the No. 1 seed in the Class 4A state tournament, and made it to the finals after a seven-year absence.

But at the end of a successful season, it all came down to what they didn’t have – a few more plays.

Kirtland Central fell short of their 20th state title to No. 2 Los Lunas, 49-43, in the championship game and finished their season 27-5 overall.

Manning said it was as simple as that.

“I just thought we were the two best teams in the state battling it out,” he said. “It just came down to a few plays that we didn’t make compared to what they did.”

The Tigers kicked things off with a 3-point basket by one of their leading scorers of the game, Natalie Jojola.

But the Lady Broncos matched them on offense and led 12-10 after one quarter.

The Lady Tigers took advantage of offensive opportunities in the second quarter and made a 10-3 run to end the first half with the 25-20 lead.

At the half, Kirtland Central had shot 32 percent overall, compared to Los Lunas’ field goal percentage of 69.

Los Lunas coach Marty Zeller said that was how they planned it.

“We’ve been to a couple Kirtland Central games and I know they can shoot, but the bottom line is stats helped a lot,” he said.

“They only had one player that had more than two 3-pointers,” he said. “The game plan wasn’t to let them shoot – nothing easy, anyway – but to make them shoot off the dribble, let them create.”

Los Lunas made an 8-0 run to start the second half and led Kirtland Central 33-24. The Lady Broncos chipped at the Tigers’ lead but trailed 38-28 after three quarters.

Both teams made it a hard-fought battle in the final quarter, with Kirtland Central replying to Los Lunas’ offensive gains. The Lady Broncos managed a short 5-0 run of their own to get within six points with less than a minute left in the game.

Kirtland Central ran out of time and opportunities toward the end, which gave Los Lunas the 49-43 victory.

Manning said his top-seeded team met their match and the game came down to who took advantage of opportunities.

He said it didn’t help that his team struggled offensively.

“We picked the wrong game to not have a good shooting game,” he said. “But as bad as we shot, we were still in it. It just came down to we just didn’t make enough plays.

“People are going to look back in the fourth quarter, but we missed a lot of easy looks in the first half, too,” Manning said. “You got to give Los Lunas a lot of credit. They made us work, but I thought we made them work too.

“When it all came down to it, they just made a few more plays than we did,” he said. “I thought we were pretty evenly matched. We let them get away from us a little bit, and we just never narrowed that gap.”

Though Manning said his team was not shaken by Los Lunas’ defense, Zeller said it was key for his team.

“We definitely wanted to keep it away from number 22 (Tatelyn Manheimer) and I think we did a pretty good job,” he said. “It was probably her low in the state tournament (three points).
“Our girls know how to identify,” he said. “We work on identifying shooters, penetrators, extremely hard and I think it paid off.”

Mia Guest led Los Lunas with 15 points and Jojola who added 12. Kirtland Central had no players in double-digit figures, but were led by Aubrey Thomas with 9 and Siigrid Lii’bilnaghahi who added 7.

Kirtland Central made it to the semifinals last season in Class 5A where they fell short to Los Lunas.

Then Manning took over the program and said it was nothing short of an incredible journey.

“We wish we were on the other side,” he said. “Playing a game like this, with the crowd that we had, the community support, I can’t even put it into words.

“I really got to thank these girls,” he said. “They’re the ones who took me on the ride. They were the driver, I was just the passenger who was annoying them, telling them where to go.”