The 2019 Santa Fe Indian School boys’ basketball team has accomplished something no other Braves’ team has done in 30 years. 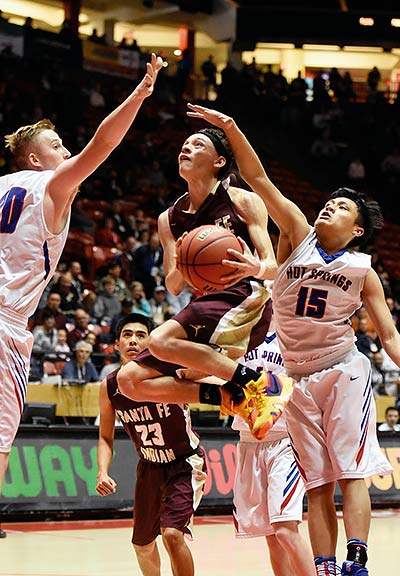 This year’s group made the finals in the New Mexico Class 3A state tournament, finishing as the reserve champion to the Hot Springs Tigers on Saturday at the Dreamstyle Arena – the Pit.

SFIS coach Jason Abeyta said it took a special group of players to accomplish what they did and he credited seniors James Bridges, Jaden Aquino and Jason Abeyta for making the commitment to the summer programs he offered. But with the challenges of living in different Pueblos and on the Diné nation, Abeyta said it was hard to get them together.

“They are feeling down right now but we wouldn’t be in this spot right now, playing in the championship game,” the SFIS coach said. “That is what I’m trying to make them understand because years before we were lucky to get into the state tournament. That is what they created for us.”

Abeyta said it was amazing that his team left their imprints as one of 3A’s best but he reiterated that it took a lot of hard work.

“It does take time,” he said. “A lot of people think that you can change the program just like that. No, you can’t do that and that is one of the things that I am grateful for these gentlemen.”

Even though they are graduating six seniors, Bridges said they are leaving the program in good hands. The other seniors are Anders Pecos, Ethan Roanhorse and Nashone Yazzie.

“It’s a good program,” he said. “I feel like we are leaving our younger brothers in a good spot. I feel like they are going to fill in those shoes quick and be in the same situation that we are in. Hopefully they can bring back a state title.”

In the finals, the Braves got off to a good start but they could not hold on as Hot Springs pulled out the win.

And although they had their chances, SFIS went 7-for-16 from the free-throw line in the fourth quarter. Surprisingly, they didn’t make one attempt in the first three quarters.

“Our nemesis showed its neck tonight,” Abeyta said. “Man, we just didn’t knock down free throws. I know it’s hard on them on what happened but it just came down to us missing free throws.

In the early going, the Braves hit 13-of-20 shots for a 28-14 advantage with Bridges, Roanhorse and Virgil Valencia combining for 18 of those points.

Nonetheless, Hot Springs scored the final six points of the first half and trailed by 10 at the break.

The Tigers had a pair of old-fashion 3-point plays and two treys to fuel a 20 to 8 effort in the third as they regained the lead at 38-36.

There were six lead changes in the final quarter and two ties with Valencia forcing overtime when he hit 1-of-2 free throws with 56.6 seconds left in regulation.

“Sometimes it takes a few motivational words to get their motors running but they never quit,” Hot Springs coach Derek Bean said of his team. “They just trusted the process. Defense won the ballgame today.

“We got down early but we’ve been there before,” he added. “We just had to believe in what we were doing.”

Hot Springs had two players in double figures with Verrels Lukman leading the way with 17 points while Coltin Whitehead added 11.

Bridges kept SFIS afloat with 16 points while Aguino had 11 and Roanhorse chipped in 10.