The Newcomb boys’ basketball team clawed their way past tall, quick, physical and mentally tough opponents throughout the 2018-19 season.

They won more than they lost except for the one they really wanted: the Class 2A championship where the No. 3 Skyhawks fell to No. 1 Pecos, 58-37.

Newcomb coach Domonique Richardson said, “When they got looks they kept shooting and they just didn’t fall – but we just battled. We didn’t get the outcome we wanted, but I’m proud of how they played.

Despite the loss, the Skyhawks made history: For the first time in the school’s 38-year history, the team played in the state championship game, earning a red runner-up trophy.

They accomplished every goal they had this season – to be regular-season district champions, district tournament champions and get past the quarterfinals of the state tournament. 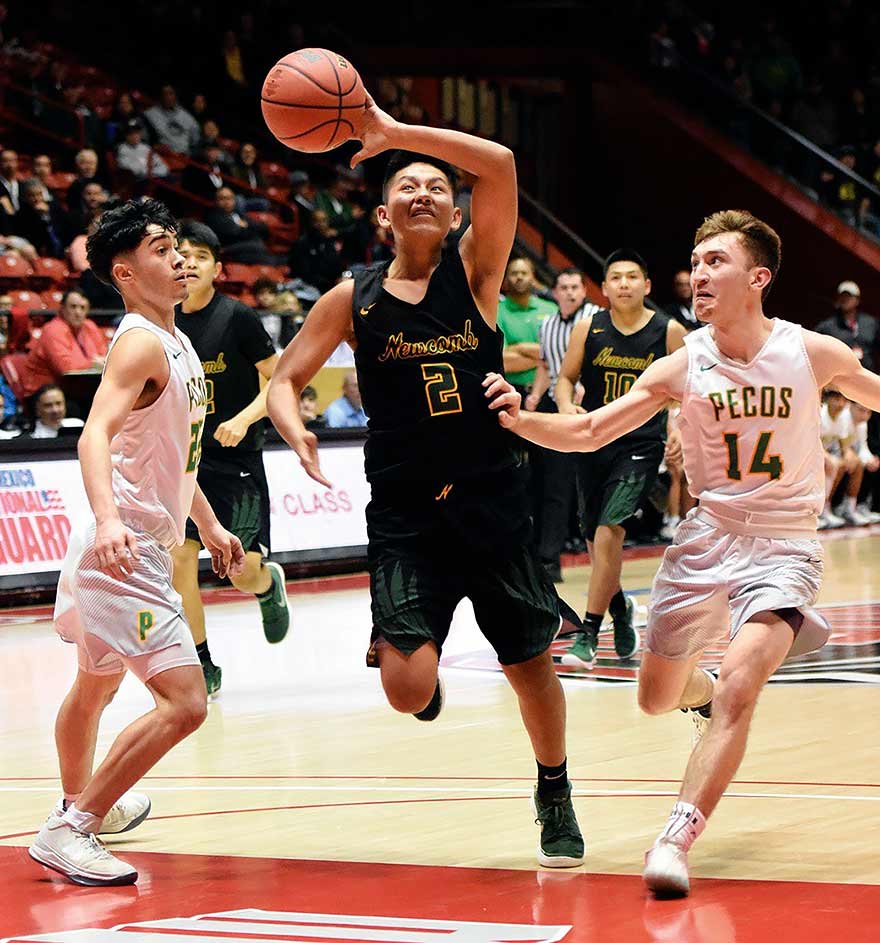 Newcomb’s Deion Johnhat takes the ball between two Pecos Panthers during the New Mexico Class 2A championship game on Saturday in Albuquerque.

Pecos entered the game intending to work the inside the paint, which they did. They made a 9-5 run to start the game and and extended it with points from the inside and from the free-throw line. They ended the first quarter up 16-9.

Newcomb started the game with offensive woes such as shooting 29 percent in the first quarter that continued into the second.

The Skyhawks tried to turn things around in the second with a 3-point basket by Kelkenny Watchman, but Pecos answered with a 6-0 run to lead 22-11. Newcomb made a 5-0 run but trailed 27-16 at the half.

Pecos coach Ira Harge Jr. said his team dominated the inside, which they had planned.

“The game plan was to go inside as best we could, because Newcomb is so quick, they’re so tough, pressuring us, so we were just trying to go over the top with them, keep the ball high,” he said. “That was kind of our strategy. We were able to do some of that and sometimes we hit a few shots, but for the most part we were just trying to stay in the paint.”

Pecos continued to work the inside in the second half, making a 5-0 run to start. Pecos held Newcomb to only nine points. The Panthers led 43-25 after three quarters.

Harge said they did not want to let up on Newcomb even with a large margin. He said his team was a apprehensive because they had heard about Newcomb’s relentlessness.

“All the things I’ve heard and seen about Newcomb, I wasn’t quite sure if they would handle the pressure, so we definitely wanted to try,” he said. “To be honest, we were nervous, because we weren’t sure if we were as quick or if we could guard them as well in the full court and it worked for us and it worked well. It helped us move the ball and get what we needed to get done.”

Newcomb attempted to cut the margin in the final quarter, with bench players making big shots, but ran out of time.

“We’re just happy to escape with a victory,” Harge said.

Richardson said it simply came down to shooting trouble for his team.

“We didn’t make shots,” he said. “A team that averages close to 80 points a game and we hold them to 58 for the game, and 27 at the half, we defended, we just didn’t make shots.
“We had some careless turnovers, some free throws,” he said, “but I’m proud of this group.”

Newcomb’s Deion Johnhat scored a team-high 10 points. Pecos was led by Xavier Padilla, who had 22, and Ismael Villegas, who finished with 12.

The Skyhawks finished the season with more accolades than they could have been imagined.

Newcomb senior Tracey Bryant said it’s been the ride of a lifetime, something he was fortunate enough to be a part of.

“It’s been a dream,” he said. “I moved up from junior varsity my junior year, came out here first round last year and lost to Santa Rosa, worked hard this year and came back. It’s a dream come true.”

With a core group returning, Richardson said he’s certain his group will return.

“We’ll be back,” he said. “We’ll make some adjustments and have a better outcome.”

“I think that that young team will be back next year,” he said. “That young team from Newcomb will be back because they have everything they need. They have to fix a couple of things as far as maybe shooting, but other than that, they’re awesome. That’s a great team.”