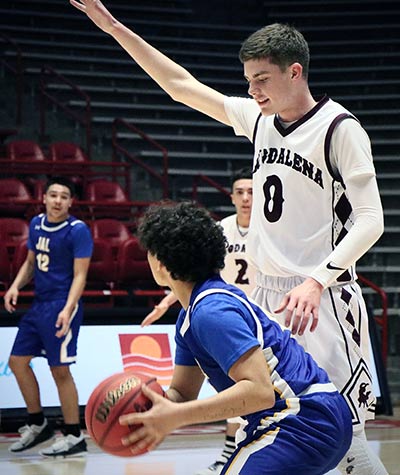 Special to the Navajo Times | XL Sports Photography
Magdalena sophomore Joren Mirabal guards a Jal player during the New Mexico Class 2A state semifinals on Friday at the Dreamstyle Arena in Albuquerque. The Steers advanced into the championship game with a 71-39 win as they will face top-seed Pecos at 8 a.m. on Saturday.

The second-seeded Steers, who improved to 30-0 overall, swiped away 21 steals over No. 6 seed Jal en route to a 71-39 victory on Friday morning.

That effort was a far cry from Wednesday morning’s seven-point quarterfinal win over No. 7 Texico.

“It’s mostly the energy,” sophomore guard Joren Mirabal said of the difference of both contest.

Against Texico, Mirabal said they came out galvanized in the opening quarter but after that they “fell asleep” and allowed the Wolverines to inch back into the game.

“In today’s game we came out with good energy … so we kept that separation,” Mirabal said.

After one quarter of play the Steers led 18-8 and at the break they increased that margin to 36-19.

An although Jal had a much better effort in the third with 13 points scored the Steers gained a 52-32 advantage before winning by a 32-point margin.

Magdalena coach Jory Mirabal said the team concept on the defensive end is just as important on the offensive end.

He said when you have five guys working together to get stops “it creates that synergy on the floor.”

That undertaking translated into some easy baskets as Magdalena made 28-of-63 shots for 44 percent, which included 42 points inside the paint.

The Steers had four players reach double figures headed by the 23 points turned in by senior Jaxson Mirabal.

“It’s harder to stop a team when they’re four (other) guys that can score,” Jaxson said. “When we’re sharing the ball it’s harder for the defense to front us, especially when we’re attacking.”

“It starts on the defense and it’s that energy that creates good shots on offense,” Jaxson said.

Magdalena will play top-ranked Pecos at 8 a.m. on Saturday for the 2A title at Dreamstyle Arena, aka the Pit.

“It’s going to be a matter of us taking care of us,” the Magdalena coach said of their approach in Saturday’s finale.