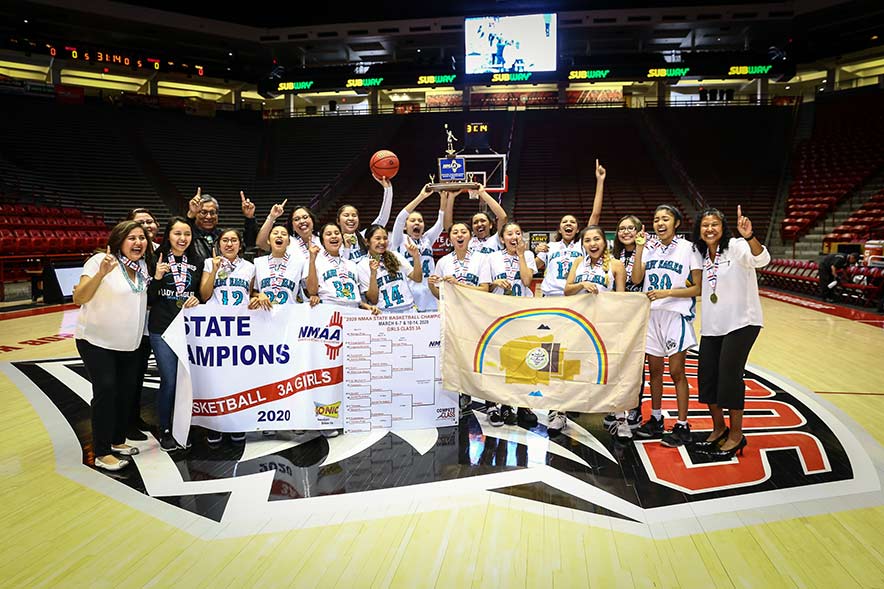 Special to the Times | XL Sports Photography
The Navajo Prep Lady Eagles pose for a picture after winning the New Mexico Class 3A state title on Friday in Albuquerque. Navajo Prep defeated district rival Tohatchi by a 43-33 count.

Like a swarm of bees the Navajo Prep girls’ basketball team pestered Tohatchi in the New Mexico Class 3A state title game.

The Lady Eagles contested a lot of shots but it was their press that made a huge difference as they captured the school’s sixth state title with a 43-33 win.

Navajo Prep closed out the season on a 16-game winning and finished their season with a 28-2 record.

In the 2A bracket, the Mescalero Apache Lady Chiefs got its first taste at a state crown as they upended top-seed Peñasco by a 69-54 count.

Kirtland Central, meanwhile, was denied its 20th state crown in the 4A finals as the Lady Broncos came up short, 47-33, to Los Lunas as three of the five New Mexico girls’ state title games were decided on Friday before an empty arena at Dreamstyle Arena on the University of New Mexico campus due to the COVID-19 epidemic.

Navajo Prep coach Rainy Crisp said her team experienced a lot of growth during the course of the season as the Eagles ended an 11-year drought with its last state title coming during the 2009 season.

“This team has matured a lot just throughout the basketball season,” she said. “And it took a lot to get here. It took the girls to really put aside their differences and play together so I’m very proud of this team.

“I’m very excited for them to experience this,” she continued. “It’s a little different with the stands being empty but this is an awesome feeling.”

In their state title run, Mescalero Apache coach Elmer Chavez said his team stayed the course even though they struggled to find any offensive rhythm in the opening half.

The Chiefs erased a four-point halftime deficit and turned it into a 48-38 lead heading into the fourth.

“I told the girls to keep shooting, eventual those shots were going to fall,” said Chavez, while noting that in the second half they were less stagnant in their offensive sets.

“We were just standing around in the first half,” he said. “I think with having no fans here we were dead.”

For a more in-depth story on the New Mexico state playoff games pick up next week’s Navajo Times on Thursday.