MV Mustangs score a pair of wins over Many Farms 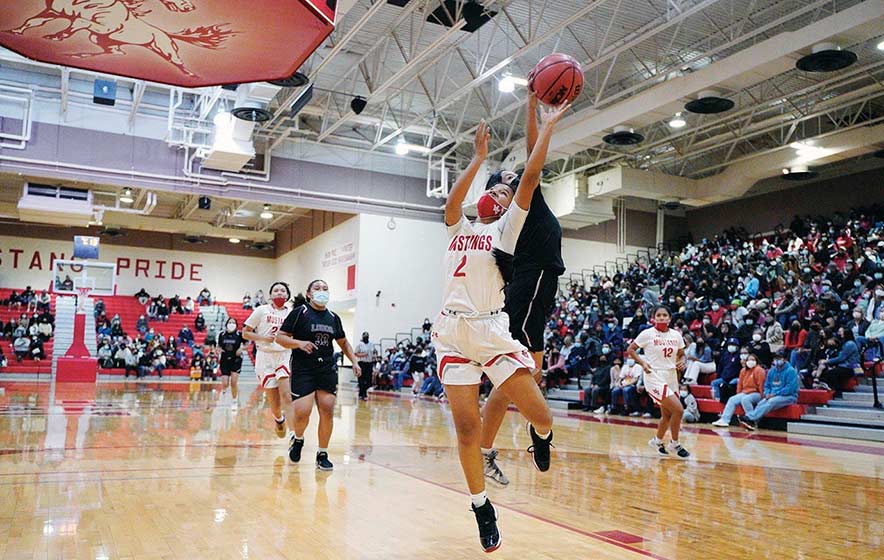 On Monday night the Monument Valley Mustangs played their first game in almost two years as they went up against the Many Farms Lobos.

It was a highly anticipated game with many fans from both sides coming to watch. The Mustang girls would win 91-17 and the boys followed with an 83-8 triumph.

The girls tipped off first, opening with Mustang Tierra Sandoval making the first shot for MV and the junior guard added another basket.

Senior Angel Holiday made the most points in the quarter with three baskets, followed by senior Skylynn Flores, who made two shots.

MV’s Paris Littleben added a basket and four penalty shots for six points while teammate Sheridan Curley had five, which included a three-pointer.

For the Lobos, Zoey Juan hit 1-of-2 at the charity line and then later added a basket from Andralyn Chato ending the first quarter 27-3 with Monument Valley on top.

The Mustangs had another big outing in the second with 29 points with Curley putting in 10 of her 23 points. Shyrai Shorty chipped in five and Kayelani Maiava and Aiyanna Nash added four points each.

The Lobos scored all of its points from the free throw line with Chato making 6-of-10.

After the break, the Mustangs had Shree Yazzie and Shyrai Shorty make three baskets each to increase its lead to 73-15 heading into the fourth.

In the final stanza, Curley made two three-point shots for a total of five treys. Meanwhile, the Mustangs got contributions from five other players, including Shyrai Shorty’s four points.

Although it was a loss, Many Farms coach Tracy Todecheene said it was a good learning experience for his team who haven’t practiced or played in over a year due to the pandemic.

“We had to think about their safety, so the girls didn’t play at all last year,” Todecheene said. “So you kind of saw what happened out there. They took a step back and in a lot of ways we’re rebuilding.”

He is certain that his team will improve in the coming season, as he knows what the team needs to work on in order to improve. He thanked Monument Valley for hosting them and for a good game.

“You know, I thought, defensively especially, we did really, really well,” Franklin said. “One thing we need to make sure to do, though, is learn how to defend without fouling so much.”

For the game, the Mustangs put Many Farms at the line 22 times with the Lobos making 13.

This year’s squad had experienced players, Franklin said, which is mostly made up of juniors and seniors.

The MV coach added that the team has a lot of speed and talent. He is certain the team will do great this season, stating the sky is the limit. He thanks Many Farms for coming out, and wishing them a good season as well.

“We’re getting tired of seeing ourselves, so it’s nice to see a different color jersey,” Franklin said, adding that he was happy for his girls to get back on the basketball court doing what they love. 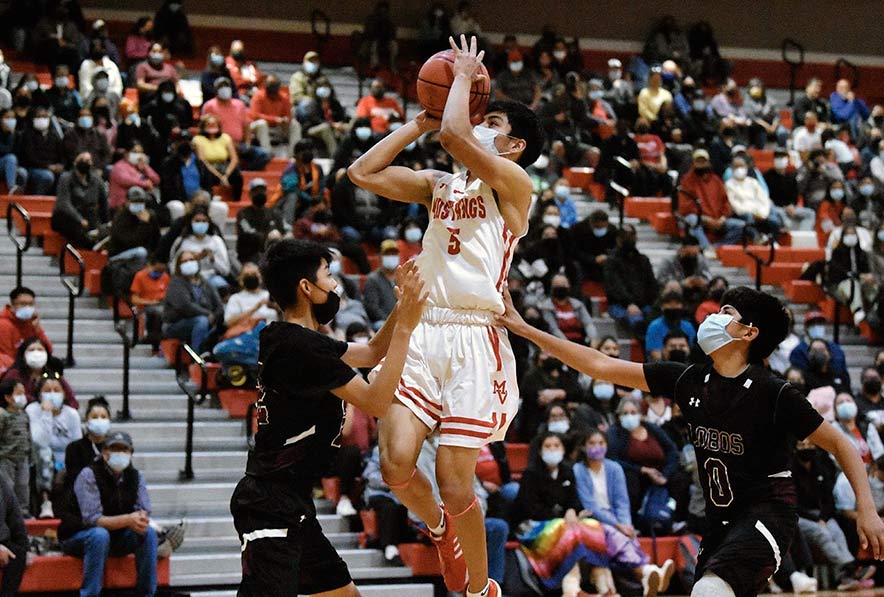 Monument Valley Mustang Andrew Sheppard (5) goes up for a basket as Many Farms Lobo defenders Leighton Team (0) and Elias Ben try and keep him from scoring on Tuesday in Kayenta.

The final game on Monday night was the boys contest.

In the first quarter, Mustang guard Roberto Flores quickly stole the ball and made the first goal in the first eight seconds of the game.

The quarter, however, was Andrew Sheppard’s time to shine, as he made four baskets and six penalty shots for 14 points.

The Mustangs picked up where they left off with Jaden Redhouse scoring eight points with three two-point baskets.

In response, Leighton Team made a 3-pointer for the Lobos after the Mustang’s first shot. Monument Valley responded with Lyle Blackgoat making a 3-pointer himself and later adding a free throw.

The Mustangs capped the first half with a buzzer beater with Redhouse scoring, ending the half with MV up 50-5.

During half time, the Kayenta Unified School District took the time to honor all military veterans in attendance along with their families.

When the game resumed, Many Farms made the first score with Team making one free throw. The Lobos started to rally and put up a sound defensive effort, but Salalea Sheppard broke through and made three shots while La’Vahtty Beverly made two.

In the final quarter, the Mustangs added 13 more points to their total with a running clock.

Lobo coach Jonathan Charley said his program, like the girls, was put on hold because of the pandemic and he is working with a new team. He said it’s no excuse but he added that his team would only get better.

“They’re really starting off fresh,” he said. “It’s a learning stage, as time goes by we’ll build up more and more and have confidence in ourselves.

“Right now this is our very first game going against a team that’s pretty much strong” he said. “So it’s a learning game, we’re still got a high mountain to climb. We’ll get there but time will tell.”