The team that is composed of 2022 graduates won the NABI tournament as an all-freshmen team two years ago.

Last spring they registered for the tournament but the pandemic canceled the 2020 tournament.

“We’re ready and, you know, it’s going to be exciting,” NM Elite coach Barry Bates said. “We’ve been waiting for this since last year and now we get a chance to defend our title.”

The Albuquerque-based squad returns all but one player, as Farmington’s Kiiyani Anitielu could not make the tournament. With that, Bates has added a Nevada prep athlete to this year’s team. 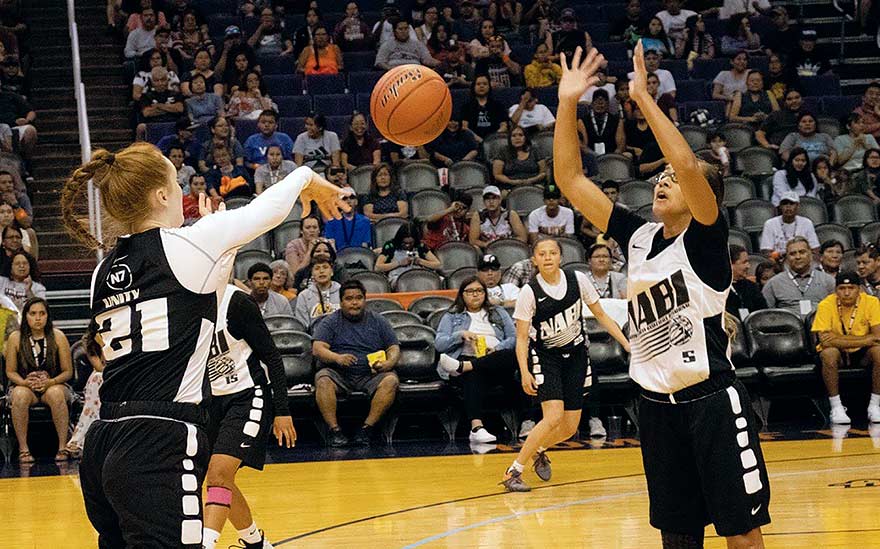 File photo
In this file photo, Unity player Gabriella Green (21) throws a pass while being guarded by NM Elite guard Jaelyn Bates in the gold championship game at the 2019 Native American Basketball Invitational. The NM Elite captured the title with a 70-66 win two years ago.

With five players that won state title with their respective schools, Bates said his team is loaded with experience.

Gallup’s Michaela McCurtain, Jordan Joe and Hailey Long helped the Lady Bengals win the 4A crown this past May.

“We have five state title winners from New Mexico all on the same team,” Bates said while adding that the two Volcano Vista players are Division I prospects with Jaelyn Bates committing to the University of New Mexico.

The New Mexico Elite coach said McCurtain, Joe and Long are working to see what kind of scholarships they can get during the summer circuit season.

“That is where a lot of girls are at right now since the NCAA opened up,” he said. “The coaches are at the NCAA showcases and we’ve been traveling since July. The girls just came out of tournament in Dallas from a huge NCAA showcase.”

As defending champs, Bates said the team understands that they’re going to get everyone’s best as New Mexico Elite won their pool earlier this week.

“As the team that won it two years ago we’re the team to beat,” Bates said. “Everyone is going to play us tough and we invite that. We just gotta get out there and play. I’m hoping that everyone is ready to play. There is nothing wrong with that, we like to see good competition.”

In pool play action the New Mexico Elite defeated the Legendary Elite, Navajo Nation’s Lady Magic and Arrow Creek by a combined score of 316 to 72.

They would have played Kirtland X-Press on Wednesday in the opening round of the double elimination bracket.

The championship game is scheduled for Saturday at noon at Camelback High School. The tourney finale was originally going to be played at the Phoenix Suns Arena but due to the NBA Finals the NABI championship game got relocated.

The winners of the tournament will score tickets for Game 5 of NBA Finals between the Phoenix Suns and the Milwaukee Bucks.

Nevertheless, the New Mexico Elite coach said there’s an incentive to win the tournament to get those prized tickets.

“It’ll be exciting and great if Phoenix were to win and close out Milwaukee with us there in the arena,” he said. “That would be super awesome.”