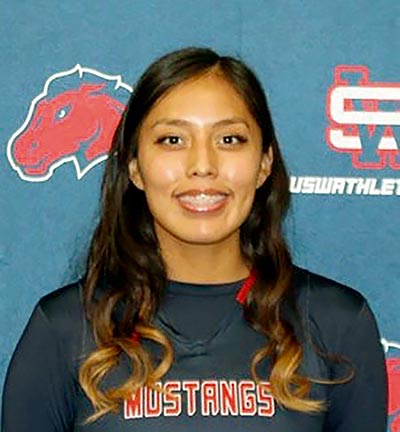 Submitted | University of Southwest Athletics
Harlei Haceesa is in her final year of eligibility for University of the Southwest women’s basketball team. The Navajo Prep graduate is expecting to complete here master’s degree in May.

The Navajo Prep High School graduate is in her final year of eligibility for University of the Southwest, where she is a graduate student expecting to complete her master’s degree in May.

She is a shooting guard after beginning the program as a post player. At 5-foot-7, she said she didn’t have the size for post in college.

She switched her position during her sophomore year, when she began working on how to be a guard, particularly ball-handling.

“It really helped me to be versatile,” she said. “I’m able to get by them (defenders).”

She averaged 5.3 rebounds, second on the team, and ranked second in assists and steals. Hacessa was rewarded by being named to the all-Red River Athletic Conference honorable mention team.

She credited her teammates for helping her be successful. “We’ve all been playing with each other two to three years,” she said. “They know how to get me open, and I know how to get them open. They trust me with the ball, and that gives me confidence.”

Through four games (0-4) entering Monday’s play, she averaged a team-high 13 points a game. She scored in double figures three times and led Southwest with a season-high 22 in a loss to Benedictine Mesa.

The conference recognized her Nov. 9 as its player of the week for her performance against Benedictine Mesa and her 14 points and six rebounds against Embry-Riddle.

“She’s very skilled,” Southwest head coach Michael Dominguez said. “She’s not as athletic as some. But she’s so smart and so skilled.”

“She has a really good mid-range shot. She likes to post up a lot. She can use her left hand as well as her right hand,” he said.

Haceesa said she has been a captain since her sophomore year.

“It has really helped me develop as a player,” she said. “I’m either directing people or correcting them, being the outside player looking in.”

This season the first-year coach has gone with a different offensive scheme.

“We’re allowed to be more open with our offense,” Dominquez said. “We create a lot of different looks, all of it on our own. We’re all looking for each other or looking for an open shooter. We’re not focused on one person to score.”

And the team is playing more man defense this season. “She usually guards the second or third option,” Dominguez said. “She uses her IQ and her skills.”

Her sophomore and junior seasons have been her favorites, Haceesa said.

“I really believe I have done the best that I can,” she said.