Melia Barlow’s meteoric rise in 6A volleyball has been “nothing short of amazing.” 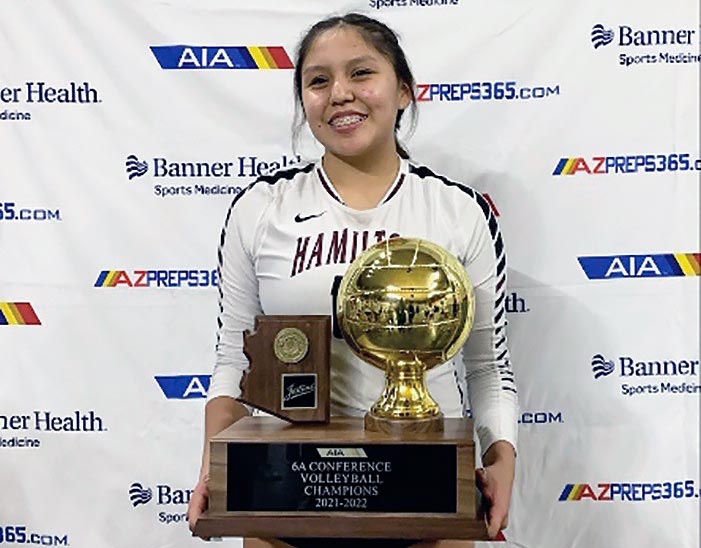 Submitted
Hamilton High junior Melia Barlow helped the Lady Huskies to the Arizona 6A Conference state title. For the season, Barlow racked up 1,189 assists, which ranks her No. 1 in the the state’s assists leader.

“I mean, she stepped into a highly competitive program and played a position that is very demanding,” Vanis said. “I’m not saying, she’s never set before but it’s different playing in 6A with the speed of the game.”

As the team’s backup setter last season, Barlow knew she was in the running to take over the setting duties after Hamilton High graduated its ace setter this past spring.

And with a season total of 1,189 assists, the Tuba City transplant exceeded her expectations as she helped Hamilton to another 6A volleyball crown.

“This is so surreal,” Barlow said. “I really didn’t expect this, especially with it being my first year setting. I’m definitely surprised with how many assists I had for this season.”

Initially, Barlow considered aiming for 500 assists at the beginning of the season and when she passed that she set a new goal of 1,000.

She reached that new goal near the tail end of the season, and following the team’s four-set win over Phoenix Sandra Day O’Conner High School in the 6A championship game on Saturday night, Barlow had reached her year-end total of 1,189.

With her numbers, she was recognized as the state’s assists leader regardless of class. She beat out Scottsdale Horizon senior Keira Hall for that distinction with Hall finishing with 1,112.

“We were neck and neck in assists,” Barlow said. “She won a state championship too in 5A, so it was definitely a competition between her and I for that (recognition).”

Vanis said she’s not surprised with Barlow’s numbers and she deserved to be the top assists leader in the state.

“She worked with a lot of great hitters, so she had a lot of choices,” Vanis said. “But she made good choices, and she distributed the ball well.

“What I like about Melia is she’s so strong,” she added. “She’d win every joust at the net.”

Vanis said this year’s team ran a lot of different options and her pupil got comfortable in running the offense.

“She made us more dimensional,” she said.

In the championship game, Vanis said Barlow went up for a set that was too tight at the net but she came up with a one-handed back set to one of her hitters.

“Our hitter destroyed that and who would have thought that she was going to make a play on that ball,” the Hamilton coach said of Barlow.

“She’s just a great kid,” she said. “She stepped into a role that maybe she didn’t want but she just blossomed and excelled, so I’m happy to have her here at Hamilton.

“She’s only going to get better too,” she added. “I’m excited that we’re getting her another year to play that role.”

The move to Hamilton, Barlow said, was a difficult one as her entire family had to make that transition during the onset of the pandemic.

With the uncertainty of the coronavirus, the Barlow family had to vacate the house they were renting in Tuba City, as the homeowners needed their house back.

Admittedly, Barlow said she knew very little of the Hamilton volleyball program but in the 18 months they’ve been there she’s found plenty of success.

“Living down here and playing for Hamilton has been an amazing experience,” she said. “I’m so happy that we made the decision to move down here. The people back home are still supporting us and we’re grateful for that support.”