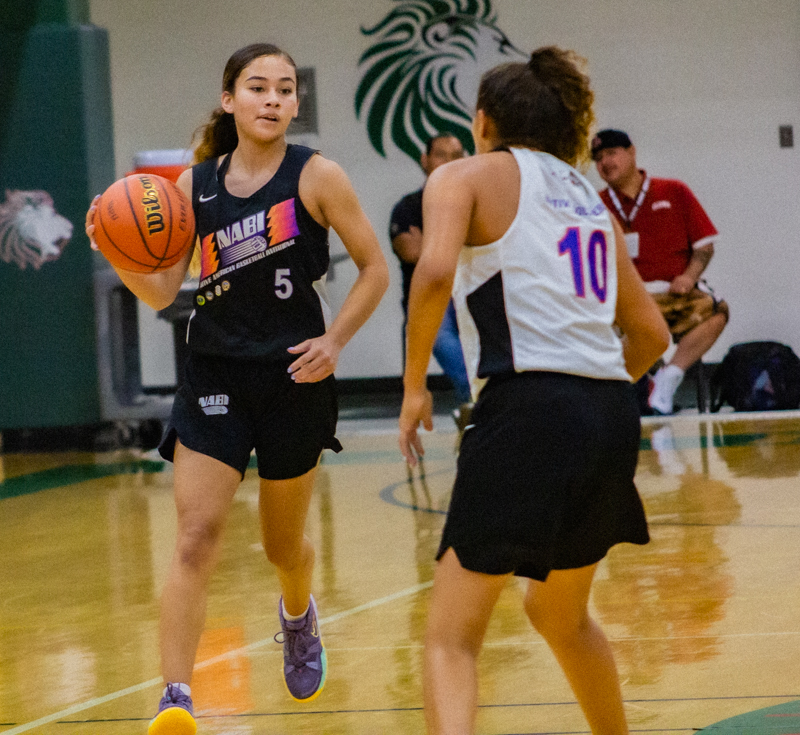 Navajo Times | Cyrus Norcross
New Mexico Elite point guard Jaelyn Bates (5) dribbles the ball against a Native Soldier player in the NABI semifinal game on Friday. The two teams will play for the championship game on Saturday at Camelback High School in Phoenix.

The New Mexico Elite girls’ basketball team is right where they want to be.

The six-member squad staved off an elimination game to reach the NABI tourney finals for the second time in three years as they defeated the Legendary Elite team by a 73-61 count at Phoenix’s Alhambra High School on Friday.

The Albuquerque-based team will have a chance to defend its national title as the NABI tournament went from a single elimination tournament to a double-elimination format this year.

Earlier on Friday, New Mexico Elite lost its only game when they fell short to Native Soldiers in the tournament’s semifinals in an exciting 64-62 contest.

“Nobody wants to lose, and you want to go into it undefeated,” New Mexico Elite coach Barry Bates said. “It was a tough loss, but our kids took care of business to get there. All they had to do was get there and now it’s anybody’s game.”

In the elimination game, New Mexico Elite stretched a six-point halftime lead into a 44-30 cushion on a three-point shot from Natalia Chavez. That trey capped a 10-2 run as New Mexico Elite hit four baskets in a span of four minutes to start the second half.

The Legendary Elite squad didn’t go away as they cut that margin down to 61-55 with 8:08 left in the contest. Nonetheless, that was as close as they would get as both teams struggled to put up points for six-plus minutes.

“We just had to bounce back and just move forward from that tough loss we had earlier,” New Mexico Elite guard Jaelyn Bates said. “We had to get through this game to play tomorrow.”

The speedy guard said her team is looking for redemption as the New Mexico Elite squad let a three-point lead slip away late in the contest.

“I’m excited to get another chance with them because they’re a great team,” she said.

Her teammate, Michaela McCurtain, is also looking forward to that rematch.

“That loss put us down a little bit, but we knew that we could play in the championship game with it being a double elimination tournament,” she said. “We just played with a lot of confidence, and we basically picked each other up.”

In the earlier game, New Mexico Elite gained a 10-point halftime lead, but they lost the momentum when Native Soldiers went on a 22-2 tear. The Florida-based team hit eight shots to start the second half as they opened up a 50-40 cushion with under nine minutes to go.

“Everything was on us,” Native Soldiers coach Skyla Osceola said. “We were rushing shots and we weren’t flowing as a team and the adjustments we made was settling down. (New Mexico Elite) has been here before and some of my girls never have been to NABI.

“We just had to calm our nerves and come out and play how we play,” she added. “They wanted us to take those bad shots, but we slowed it down and we got the best shots for us.”

“Rebounding was huge for us,” Osceola said. “We believe in defense and rebounding. That’s pretty much our game. As long as we play defense and take care of the boards I know that we can win.”

Osceola said she’s happy that her team punched their ticket to the championship game but they’re not done yet.

“I mean it’s great, but we still have one more game to go,” she said. “We want to win it, so we’re not satisfied yet.”

To win another national title, Bates said his team has to start making shots at a better clip.

“We’re not hitting our shots like we did earlier in the week,” he said. “We like to play fast and I know our girls are tired but we have to make shots. Hopefully, with some rest we’ll be ready for tomorrow.”