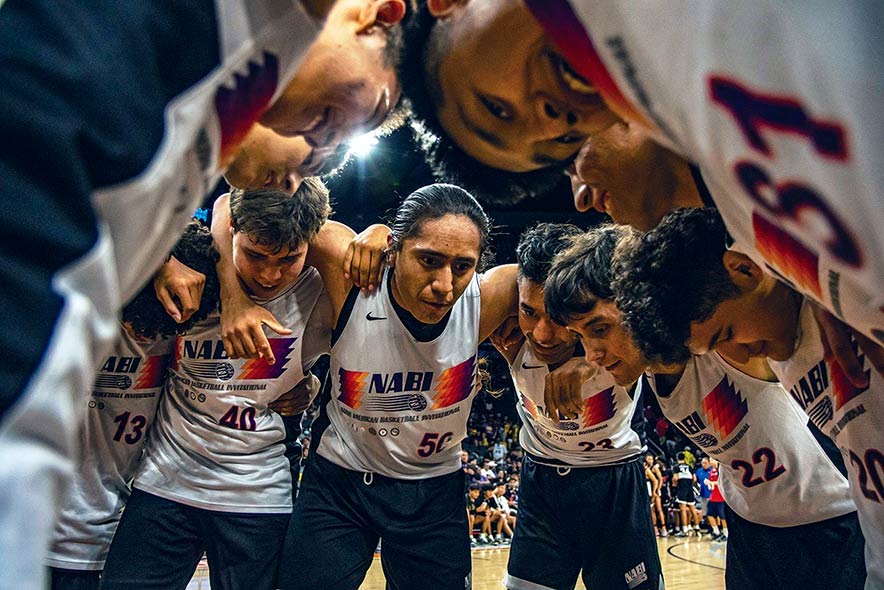 Special to the Times | Cyrus Norcross
The AZ Warriors huddle together after defeating the Northern Elite basketball team by a 78-66 count in the NABI chamionship game on July 23 at the Footprint Center in Phoenix.

Saturday’s appearance in the finals of the Native American Basketball Invitational marked the second time that a Northern Elite basketball team has played in the title game.

The Window Rock-based team came up short to the AZ Warriors by a 78-66 count inside the Footprint Center, home of the Phoenix Suns and Phoenix Mercury.

Northern Elite coach Rick Destea said they didn’t get the trophy they wanted but he was pleased with their runner-up finish in a game that was streamlined on ESPN+. 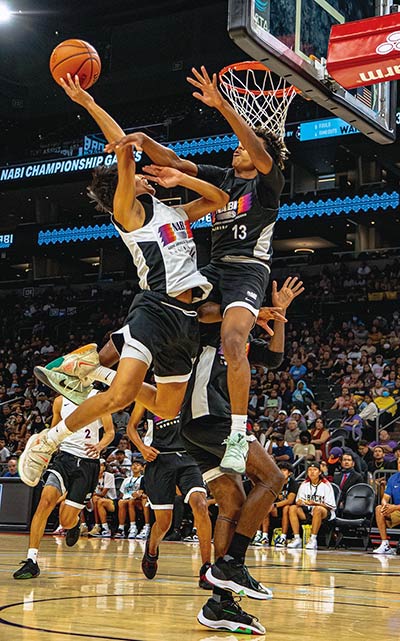 Special to the Times | Cyrus Norcross
AZ Warriors Jason Redhouse (34) goes for a layup as Northern Elite Dontrelle Denetso (13) attempts to block his shot during the 2022 NABI championship game on July 23.

“There is nothing to be ashamed of,” Destea said. “They gave everything they got, and at the end we just came up short. This is going to sting for a while, but there is more in life than just basketball.

“The kids still have their education, and some of them are going off to college,” he added. “And some of them are returning to their high school programs next year. There is a lot of things they could take from this, and it’s something they can learn from.”

Destea said being one of the two finalists is a huge accomplishment as 10 years had elapsed before they got to play in a NABI championship game.

“It feels great,” he said. “It’s something that we always strive for each year and, you know, to come out as No. 2 among 68 teams is a good finish for us, even though it’s not the finish we were looking for.

“We made it to the end, and it’s still a good feeling for us,” he said. “The players were happy with the end results.”

The encounter on Saturday was the second meeting between the two squads with the AZ Warriors posting a 58-53 win in the semifinals of the double-elimination bracket.

Northern Elite had to survive three elimination games the day before to get a rematch with the AZ Warriors.

“They were against some solid teams,” Destea said. “Hats off to those great teams. They wanted to win just as much as we did. They gave us a good game and they all play us tough for each game.”

In the title game, the AZ Warriors took the lead for good with a 15-0 run midway through the second half, erasing a two-point deficit with Anthony Seumanu scoring seven of his team-best 24 points.

“My game is pretty much attacking the basket first,” Seumanu said, who was named the tournament’s MVP. “All the credit goes to my teammates. They always give me wide open shots and they create opportunities for me to get to the basket, so props to my teammates and coaches.”

Destea said Seumanu caused plenty of damage, but at times his team gave up some easy baskets there at the end.

“They were fired up, and that got them going,” he said of AZ Warriors. “When you’re fired up like that good things happen.”

On their end, Destea said their shots did not find mark.

“The shots that we normally take did not fall for us and we got behind,” he said. “We tried to get our guys focused again, but it is what it is. I’m still proud of the boys.”

The Destea-coached team had three players in double figures headed by the 19 points from senior-to-be Cedarius Yates.

The La Cueva High forward scored 12 of those points in the opening half. In the second, Volcano Vista post Kenyon Aguino put in 13 of his 17 points.

“We had some shooters, we had some good ball handlers and we had guys that could finish inside,” Destea said of the dynamic of the team. “We’re kind of pretty solid this year.”

In addition to Seumanu, the AZ Warriors also got 13 points from Kota Benson, 11 each from Keon Talgo and Jayson Redhouse while Farmington High graduate Cayden Yazzie added 10.

“I left my hometown of Farmington to train out here with these boys,” Yazzie said. “We worked all summer for this, so it means the world to me to win with these boys.”

And although he didn’t score as much during the six-day tournament, Yazzie said he wanted to make his presence known on the rebounding end.

“That is what I’m passionate about,” he said. “I like getting rebounds and I like scoring points but scoring points hasn’t been going well for me, so I just wanted to do what I could with rebounding.”

Yazzie said the team’s rebounding and its run-and-gun mentality put them over the top.

“We like to run-and-gun and that’s what the AZ Warriors do,” he said. “We had a lot of key rebounds that pushed us over Northern Elite.”

The title on Saturday was AZ Warriors third overall with the last coming in 2016. Head coach Robert Johnson said he was blessed to have worked with a talented group.

“It takes a lot of work, you know, for these guys to get here,” Johnson said. “They do a lot of workouts with our coaches, but they also work with their own (high school) coaches.”

The longtime AZ Warriors coach said winning the tournament is pretty significant but that’s not the entire focus.

“Our focus is getting them to the next level,” he said. “Our focus is helping them out, you know, for those that want to play college.

“NABI is a good exposure tournament for them, where they can get people to see them and see what their skills are,” he added. “It’s always great for them to be there to have that exposure. That is what I’m most happy about is they had an opportunity to come and have fun this week.”