After a tough outing during last year’s National High School Finals Rodeo, the team-roping duo of James Arviso and Cashton Weidenbener forged ahead with better results this year. 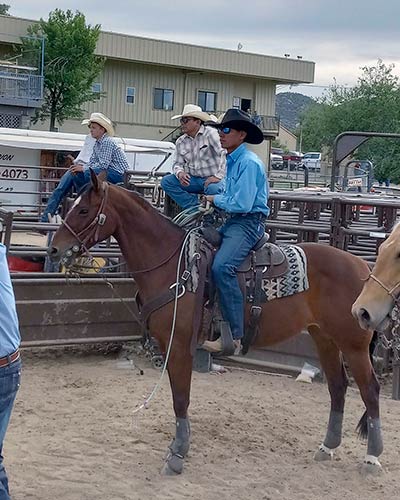 Navajo Times | Quentin Jodie
James Arviso of Winslow captured a world title with heeling partner Cashton Weidenbener during the National High School Finals Rodeo. The pair roped three draws in 19.24 seconds. He is pictured her during the state finals of the Arizona High School Rodeo Association.

They were crowned world champions on Saturday night following the weeklong event held in Gillette, Wyoming.

The pair won the three-head average with a total time of 19.24 seconds, which was capped by the 5.8 run they turned in during the short round performance at the Camplex Event Center.

“I really can’t describe it, but it’s a sure dang good feeling,” Arviso said.

The Winslow cowboy said they roped great all week, as they finished with a second-place run of 5.94 seconds in the first round. They added 7.5 effort in the second round for 13.44 aggregate on two heads.

“We made the best run we could on that first steer,” Weidenbener said. “We had a stronger one in the second round, and all we wanted to do was catch to make the short round.”

As it turned out, those two runs earned the duo the first-high call-back for the short round, as they were the last ones to rope.

“We’ve been in this situation before and the team that went before us went pretty fast,” Weidenbener said. “We knew we had to put the best run we could on that last steer.

“We knew it would go left, so we had to take our first shot to win it,” he added.

That second-place team was no other than the sister/brother combo of Kenzie and Ketch Kelton, a team that beat out the world champs for the state title in Arizona.

“It was cool that they got second just because we’re all from Arizona,” Weidenbener said. “We wanted them to do well also.”

Arviso said the Kelton siblings made them work as the reserve champs finished with a 20.21 aggregate, finishing nearly one second behind the Arviso/Weidenbener combo.

“They didn’t give us any slack,” Arviso said. “They gave us some good competition, but at the end we just executed.”

Arviso credited his heeling partner for getting the job done in their penalty-free runs.

“He’s cold as ice,” Arviso said of Weidenbener. “He doesn’t say much, but he does his job. I’m glad that I had him behind me on all those steers.”

Weidenbener said he liked roping with Arviso the past couple of years and to end with a world title is icing on the cake.

“I couldn’t have asked for a better partner than James,” he said. “This was our last high school rodeo and now I’m headed to Weatherford College on a rodeo scholarship.”

As for Arviso, he plans on making his own path as a professional team roper.

“I’m going to keep my foot on the pedal,” he said while adding that he wouldn’t have done this without his grandfather Victor Begay.

“He’s been behind me, and he’s been pushing me,” he said. “I’m doing great because of him.”

In addition to Arviso, some of the area contestants also fared well during high school finals.

In the saddle bronc, Houck, Arizona, cowboy Shane Phillips made the short round with a top 20 finish of 97 points.

In the go-rounds, Crownpoint’s Kadin Jodie recorded a 2.42 run in the second round of the breakaway, which earned her a three-way tie for fourth.

In the steer wrestling, Crownpoint’s Tydon Tsosie placed ninth with a 5.0 run on his second steer.