For the past 19 seasons, Shawn Martinez has created a stir for two teams in the NBA as a program and music director.

The Diné, who has roots in the Chinle and Window Rock area, got his professional start with the Denver Nuggets in 2002.

Martinez composed and orchestrated the in-game entertainment for the Nuggets for a dozen years before landing that same gig for the Detroit Pistons for the past seven seasons. 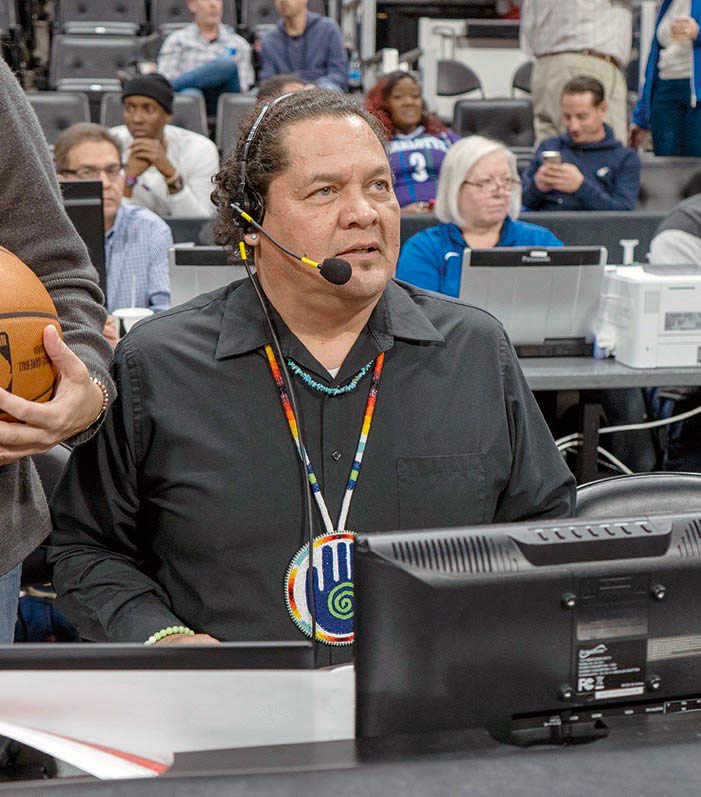 Submitted
Shawn Martinez, a Diné with roots from the Chinle and Window Rock area, serves as the program and music director for in-game entertainment for the Detroit Pistons. Martinez got his start with the Denver Nuggets in 2002.

His job consists of piecing a script together to help keep the fans engaged at every home game with music, lights, dancers, drum line, a mascot and video-board graphics.

“It’s a game outside of the game,” Martinez said when asked to describe his duties. “My job is to make sure everybody has a good time from the time they walk into the arena to the time they leave.”

Martinez said there are a lot acts in his program and he tries to change up the routine for every home game.

On some nights he’ll just have a few of acts working “but on big nights” he’ll employ his entire entertainment group that includes dancers, a drumline, the Piston Minis and the Piston Extreme Team with the latter two doing acrobatic stunts on the arena floor.

“There’s also a DJ,” Martinez said. “We try to make sure there’s a variety so that you’re not seeing the same show every night. It’s definitely a challenge to give it a different look every night.”

And while he has no interaction with any of the Detroit players during those home games, Martinez said part of his duties is to “compliment the game.”

“Music in the NBA has a big piece in it because you can play up songs when players make a slam dunk or when they’re playing defense,” he said. “It accentuates the game and it accentuates the players. With music, we get people moving and dancing. We just try to make it all come together and be fluid with it.”

But due to the novel coronavirus pandemic, Martinez and his group have not performed since the NBA suspended play after Utah Jazz center Rudy Gobert tested positive for COVID-19 on March 12.

“We really miss what we get to do and when something like this happens it makes you appreciate your job even more,” he said. “We want to get back to work and make people smile again, knowing that what we do affects people. We miss the rush and we miss the excitement. We want to make people smile and have a good time.”

As one of the best in the league, Martinez directed and produced the celebrity game and the NBA Cares Special Olympics Unified Game during NBA All-Star Weekend in Chicago earlier this year with his production team.

“Being part of that whole process was amazing,” he said. “When I got the email I called my wife (Kristen) and I almost broke down in tears. I was very excited because it finally happened. Being selected was a dream come true.

“When we first got there one of the big dogs told us that we’re one of the best in the business,” he said, “and that made us feel good.”

As a graduate of Window Rock High in 1985, Martinez said he always wanted to be part of the NBA. After high school, he went to Arizona State University for a year before he walked on for the Fort Lewis men’s basketball team.

“I played every sport I could but basketball was the love of my life,” he said. “Growing up on the rez, my dream was to play in the NBA but after I played my last college game I knew that wasn’t going to happen.”

Little did he know at the time there was going to be different way for Martinez to get to the NBA. While at Fort Lewis, Martinez learned the art of DJ-ing.

“I was hanging out by the booth at little club in Durango and one night they fired the DJ and they told me that I was on next,” he said. “I really didn’t know what I was supposed to do but I ended up teaching myself and music became a big passion of mine.”

Soon after graduating from Fort Lewis, he migrated up north to Denver and it was there he was discovered by Harlan Hendrickson, a member of the Nugget entertainment team.

“I was DJ-ing all over Denver and he sought me out in the city,” Martinez said.

Admittedly, Martinez said coming from a DJ-ing background has aided him with his current position.

“It’s helped me with because you learn how to read a crowd,” he said. “As DJs we try to get everyone to dance but sometimes there is one guy in the corner that is not dancing and we’ll try to get him to dance.”

With music being the language of the world, Martinez said a DJ can play one song and for the most part it’ll stir up the same reaction no matter where it’s being played.

“Music has so much power and those songs will take people on a long ride and they’ll reminisce about the good old times,” he said. “People get moved by it and it’s usually brings a smile.”

Growing up, Martinez said he had no inkling of being a program and music director for the Piston organization but he feels blessed to be entertaining thousands of rabid fans.

“I never thought about doing this but DJ-ing kind of tied me into this,” he said. “And with me directing it’s become full circle.”