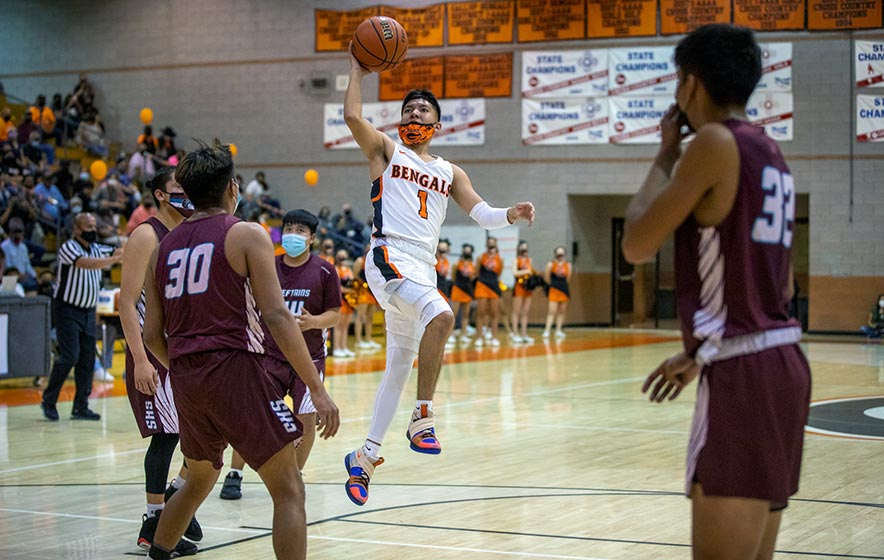 Navajo Times | Sharon Chischilly
Gallup senior Quentin Richards (1) drives to the basket during the first half against Shiprock Chieftains on April 29. The Bengals open the 4A state playoffs on Tuesday against No. 3 seed Bernalillo at 7 p.m.

For the past few seasons, the Rehoboth boys’ basketball team has been invited to the state playoffs. 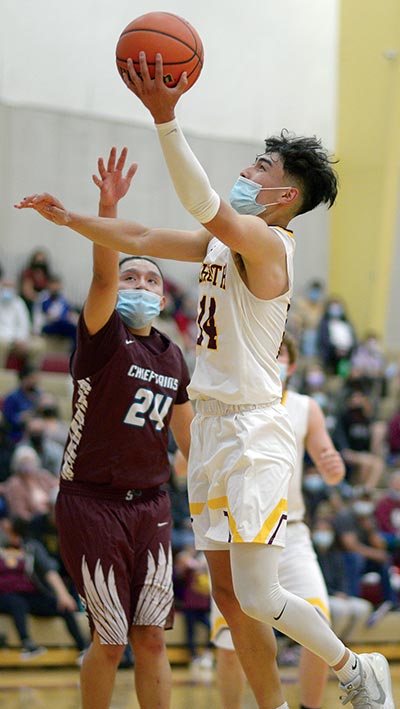 Navajo Times | Donovan Quintero
Rehoboth Lynx Talon West (14) aims the ball for the basket as Shiprock Chieftain Javon Thomas (24) reaches up for an attempted block on April 6 in Rehoboth, N.M.

And while they have been a consistent participant, there is a different feel to this year’s Class 2A tournament.

On Saturday night, the Lynx were awarded the top seed when the New Mexico Activities Association released all 10 brackets for the weeklong playoffs that will end at the Pit on Albuquerque later this week.

In addition to the Lynx, five other area schools made the playoffs and they include Gallup, Kirtland Central, Navajo Prep, Thoreau and Pine Hill.

The 1A, 2A and 3A games will start today while the 4A and 5A teams will began play on Tuesday with teams playing at higher seeds or neutral sites.

“This is a cool reward for the hard work that these guys put in,” Rehoboth coach Kevin Zwiers said of earning the school’s first No. 1 seed.

High seeds do come with expectations, but Zwiers said they’re taking the playoffs with little to no pressure.

“I really don’t look at it that way,” he said. “We’re approaching the playoffs with that mentality. We want to go out and have fun because we weren’t sure if we were going to have a season this year. We’re just excited to be playing and any game that we get to play is an extra bonus game.”

“We’ve seen a little bit of game film on them,” Zwiers said of their opponent. “They have some height. They’ve got some really athletic kids, and they have some really fantastic shooters. If you give them some space they will knock it down.

“They also got a long, lanky athletic kid who could drive and finish, so it’s going to be a challenge for us,” he added. “We definitely got to be ready to play.”

In the 3A bracket, Navajo Prep earned the No. 3 seed but instead of hosting New Mexico Military Institute at home they will play at a neutral site on Monday at Cleveland High in Rio Rancho. Tipoff is scheduled for 6 p.m.

“I think we kind of had an idea that we would be somewhere in the top four,” Navajo Prep coach Matt Melvin said. “We were hoping for that and we were surprised to get the No. 3 seed, so we’re excited.”

Last season, the Eagles lost to NMMI in the opening round and Melvin said they were hoping to match up with the Roswell military school again.

“They knocked us out in the first round,” he said. “They’re pretty much bringing back two of their main guys and they had a pretty good three-player system last year. They graduated one but they’re two guards are coming back.

“They’re a real physical, athletic team,” he continued. “They’re very strong and they’re well coached. They play physical man-to-man defense, and they like to run and get after you up and down the floor, so it’ll be a pretty good matchup.”

In their half of the bracket, district foe Thoreau got the No. 7 seed and they will play at No. 2 seed Hot Springs at 6:30 p.m.

“I’m so proud of the boys,” Thoreau coach Andrew Gordon said, as the Hawks are making a third straight trip to state.

The previous two seasons, Thoreau was given the No. 16 seed and Gordon said being seeded No. 7 is a sign of progress.

“I feel that our program has improved greatly,” he said. “I thought we would be anywhere from the six to eight (seed), so we’re excited to play Hot Springs.”

In the 4A bracket, Gallup earned the highest seed in District 1-4A as the Bengals earned the No. 3 seed. They will play No. 5 Highland at 7 p.m. on Tuesday following the girls game, which is scheduled for 4 p.m.

Kirtland Central, meanwhile, will be on the road playing at No. 4 Espanola Valley at 5 p.m. also on Tuesday.