‘When I play, reality goes away’: NAU’s new basketball player leads the score in opening season

Jacqulynn “JJ” Nakai is a student-athlete on the Northern Arizona University women’s basketball team. After transferring schools, the Flagstaff native returns home from the Univeristy of Nevada and is now helping the NAU team to victory.

The NAU team has had a good opening season with three victories and one loss. Their one loss was against Arizona State, but Nakai scored 17 points, the largest score that day. Then the previous weekend, they played two games against Eastern Washington. Both were NAU victories, and both saw Nakai leading the score, 18 points on Saturday and 21 points on Sunday, her contributing skills as a point guard securing the wins.

Nakai said that she first picked up basketball when she was about 6 after watching her relatives play it and thinking it looked fun. While at Coconino High, she played softball and ran cross country, but her true passion is basketball.

“When I play it, it’s kind of like everything that I have going on in reality, in real life, just goes away. I forget about everything that is happening outside when I’m playing,” Nakai said. “It’s just a kind of in-the-moment thing, and I just love playing, like when you’re dribbling the ball, I love the feeling of it. And the different opportunities it gives you, like meeting new people, traveling around the world, and the different aspects like that.” 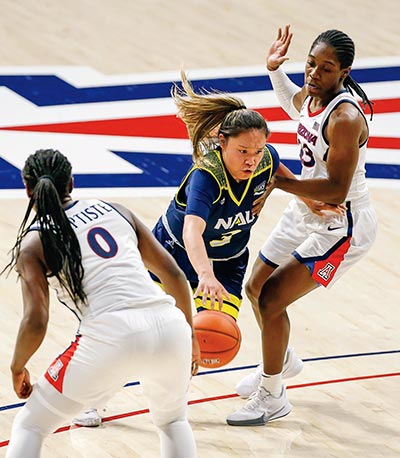 Submitted | NAU Athletics
Northern Arizona University guard JJ Nakai splits the defense against nationally ranked Arizona on Nov. 29. Nakai is one of the leading scorers for the NAU women’s squad at 19.5 points per clip.

NAU’s head coach for the women’s basketball program, Loree Payne, said they wanted her from the start, but as Payne was taking the position, Nakai had already signed on with Pima Community College in 2017 to play Division I.

“When we first got the job up here,” Payne said, “we knew there was a very special player out of Coconino, but she had already signed with Pima Community College, so that was when she first came on our radar as a potential recruit for us.”

Nakai would go on to play and study, first in Tucson, then making a transfer to the University of Nevada in 2019. Finally, by the beginning of her senior year in 2020, Nakai decided to transfer to NAU.

“She’s been doing very well,” Payne said. “We are very excited to have her here. Right now she’s top five of scoring in the Big Sky Conference. I think she has a really good opportunity to get a lot of accolades from our team and through the conference this season. She’s been an absolutely amazing addition to our program.”

Nakai said that she is happy to be back home in Flagstaff and that she and her team have been getting along very well. Already she feels like being back home is a great improvement.

“So, when I decided to transfer to NAU, it was just because I wanted to come back home,” Nakai said. “My family is here; all of my supporters and the reservation is just right there. I needed that support in a way, and things weren’t working out the way I wanted them to in Nevada, so I took a different route, saw the other opportunities and went to NAU.”

With the season off to an excellent start for NAU and the team following strict regulations to keep everyone safe from the COVID-19 virus, Nakai feels confident that the team will achieve great things this season.

It has been a long journey since Nakai left high school three years ago, and in that time, she has won multiple awards and honors. While at Pima, she was a two-time ACCAC Player of the Year, two-time ACCAC All-Region First Team, and was the ACCAC Division II Player of the Week nine times.

At Coconino High, she was a three-time First Team All-Grand Canyon Region, two-time Arizona Daily Sun Girls Basketball Player of the Year, and was First Team All-State in 2017. She said she owes these achievements to her coaches and supporters.

“I’d like to give a shout-out to all of my previous coaches because they had helped make me into who I am today,” Nakai said. “They have guided me in this direction. They made me into the player that I am and the person I am overall. So, it’s my high school coaches and my college coaches and my family I appreciate.”

“I think for her, she’s just such a solid basketball player,” Payne said of Nakai. “She’s a leader. She’s a floor general. She plays point guard position, so the ball is in her hands quite a bit, but she’s just a natural athlete. You can tell she put a lot of work into her game, and she is no doubt in my mind a Division One player coming out of high school.

“Her performance has been absolutely fantastic, and I think there is always room for improvement,” Payne said. “I think she is just going to get better and better within our system, and her potential is limitless as far as she wants to achieve here.”

Nakai is a senior studying in the health science field, but she hopes to continue her basketball career.

“My goal is to go play pro,” Nakai said. “Like overseas probably, but just go play pro because I always had that dream when I was younger. … Being able to do that, especially as a Native American, would be amazing. And just to give the younger generation, who are Native, a role model that they can look up to. Just give them that positive example.”