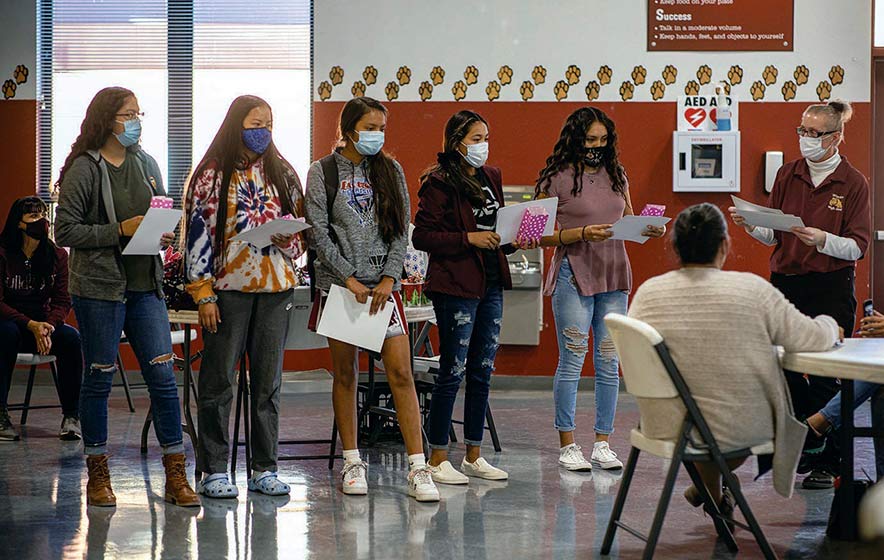 The Lady Bulldogs landed three players on the Arizona Interscholastic 3A East All-Region team, which was voted on by league coaches.

Winslow also got the nod for another prestigious award with second-year coach Julie Thomas being named the 3A East Coach of the Year as Winslow earned a state playoff bid this year under Thomas’ watch.

“This has nothing to do with me or the AIA,” Winslow AD Kourtney Hendricks said. “(Julie) was nominated and voted by her own peers. The other (3A East) coaches in our region voted her coach of the year and that’s a huge success.”

“This is quite humbling,” Thomas said of her recognition. “What they said was they saw a whole lot of improvements in Winslow over the course of the year.”

Due to the pandemic, Thomas said the season was pushed back three weeks from its normal start time. Nevertheless, she said her 23 girls got right to work.

“All the coaches noticed the improvements in Winslow,” she said. “That was a real big thing for me because the time and effort we put in with these girls was getting noticed.”

Thomas said Wagner played a huge role on the team, being one of three seniors on the team that graduated eight the year prior.

“Her attitude and sportsmanship was so good this year,” Thomas said. “All the girls looked up to her and we will definitely miss her.”

Thomas said the other league coaches were real impressed with Wagner’s defensive skills.

“That was shocking they said that,” said Wagner, a three-year varsity letterman. “I just tried my best every single game and I think that’s why the other coaches recognized me.”

Wagner said playing libero was something new for her as she played outside hitter last season.

“It was kind of hard adjusting to what I had to play this year,” she said.

With it being her senior season, Wagner said she was happy that she got to play as some of the area schools opted out of competition due to the ongoing COVID-19 pandemic.

“Not many of the reservation athletes got to play so this was pretty special,” she said. “It was my senior year and I wanted to play.”

“I’m very thankful that we got this opportunity to play, even though it was shortened,” the sophomore outside hitter said.

“I’m honored that I was recognized but this was a team effort,” she said. “We all worked as a team and I got that award because of my teammates. They all made great passes and great sets.”

As for her serving prowess, Singer said she served aggressively and smart.

“I just picked my spots on the court,” she said.

Thomas said Singer was the Bulldog’s most consistent hitter.

“She just shined this year,” the Winslow coach said of her pupil. “The improvements she made this year made her a good volleyball player. She was always trying to get better.”

Thomas said Gonnie was another player that shined on her team.

“She’s small but you would never know that by the way she hits,” Thomas said. “She can also dig and she can also serve. She’s definitely plays above her age.”

In addition to being named to the 3A East team, Gonnie was also recognized as the MaxPreps Player of the Year for the Winslow squad.

“This is amazing,” Gonnie said of being selected. “I just want to thank my teammates and coaches for the extraordinary season we had. It’s unbelievable that we made state, and it’s something we need to build on for next year.”

Thomas said she was happy with the way season progressed and she’s looking forward to next season with the players she has coming back as Winslow will graduate two other seniors in Jocelyn Ashley and team manager Starrlyn James.

“We had a great season,” Thomas said. “It was a lot of fun and to see these girls improve day after day was great.”